Surprised to see there hasn’t been a topic created yet for this!

What were your thoughts on the “100-Page Super Spectacular”? The name cracks me up, but I really enjoyed this book! It’s been a while since I really paid attention to new releases and went out of my way to pick something up on day one!

What was your favorite story from the anthology? Mine is tied between the Alan Scott or Kyle Rayner stories, but that’s probably just because they’re my favorite lanterns. Although I REALLY enjoyed the Simon Baz story. I haven’t really read much of his stories, but I’m going to definitely be going out of my way to check them out now.

Which cover variant did you get? I ended up going with the 1950s variant cover by Matt Taylor, but I really loved all of them. It was so hard to choose.

Do you have a favoite piece of art from the book? Bruce Timm’s Hal Jordan stood out to me. Maybe it’s just because I grew up watching those shows haha.

Were there any other things you noticed or wanted to talk about?

Let me know down below! And maybe recommend some other Green Lantern stories so people can maybe find new stuff based on what they liked in this book! 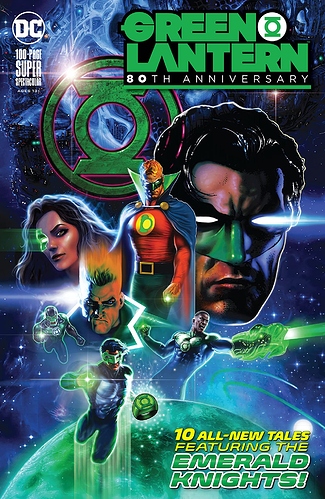 I plan on getting it (there were shipping delays to our local shops). I’m torn between several covers though, so I get more time to ponder.

I probably liked Johns’ and Venditti’s stories the best. They both had fun and serious moments. The Sinestro story was interesting, and I thought the art throughout the book was decent. I haven’t seen much of Simon, so I have limited comparisons, but his story’s tone seemed odd to me as did some of the difficulties his constructs seemed to have interacting with targets.

I thought the Far Sector art splash looked cool and stood out to me. I liked most of the art in the book, although I wished more of the color spectrum showed up. Green and purple my husband and my favorite colors and were our wedding colors, so I especially like seeing big splashes involving those (and Hal/Carol being awesome).

The Secret Files of various Corps members was a nice touch at the end of the book.

I’d recommend John’s whole run as well as Venditti’s Hal Jordan and the Green Lantern Corps. I’m also partial to the Silver Age, though some of it gets quite wonky.

this comic and was mostly worth the $09.99 i spent on it at my local comic book store (www.arkhamcomicsandgames.com) despite myself not being a Green Lantern Fan myself as well and i will add that i enjoyed it more than the joker one as well

My favorite story was the Venditti/Sandoval story about Kyle, Hal, and John reminiscing. I’m a big fan of stories that explore the dynamic between the Four Corpsmen, and I think Venditti has always had a really good feel for all of their voices. In general, I liked nearly all of the stories, with the exception of the John story, which I felt was pretty flat.

I got the Kyle cover, but it was a hard decision. I really liked several of them, including Sharp’s, Nicola Scott’s, and Jim Lee’s. I ultimately went with Kyle because he’s my favorite lantern.

Overall, I thought this issue was stronger than the Joker and Catwoman specials. Probably on-par with the Robin special, which I really enjoyed.

I really enjoyed the Alan Scott story but on the other hand, I’m not sure I’m really in favor of changing him to that degree. It was one thing when they did it to the New52 earth 2 Alan because that whole universe was an entirely separate entity from the DC I had been reading for thirty years or so at that point and I was willing to write it off as a five year else worlds experiment.

Let me be clear. This is not based on prejudice. in fact, I enjoyed this story for the same reason I enjoyed Larry Trainor’s story in the Doom Patrol TV series. It was a very well written story about keeping a part of him hidden from a world that (at that time) would never accept him if it was revealed (No matter how many lives he saved.)

But my reservations on the subject come from the same place as my feelings on the Post Flash:Rebirth Barry Allen. Barry’s parents were alive all through his career (They actually died peacefully off-panel somewhere between “The Return of Barry Allen” and “Chain Lightning”) Unlike certain people in DC’s Heirarchy, I do not believe that every hero in the DCU needs a Batman style traumatic childhood event to lead them on a path to becoming a superhero.

I thought it was very true to life having an “old fashioned” dad begrudgingly accepting his son’s lifestyle.

Its a new timeline/continuity. That stuff was pre rebirth. All of that stuff was cannon and technically still is. This is a new Alan Scott. It doesn’t take away from the old stuff since the new one isn’t the one who went through that timeline.

Just gonna @golddragon71 here too since it spawned from your original message.

● Favorite story: Venditti’s piece. He does no wrong with Green Lantern.

● Variants: I was tempted to go to a comic store for the Jim Lee variant, but I passed and stuck to the digital edition.

Overall, I dug the book. It was one of my most anticipated new reads this week, and it delivered.