Gotham Central is one of my favorite comics, and I recently read Alan Moore’s Top 10 on a recommendation, and I’ve decided that I love superhero cop stories. Are there any police-focused DC (or any other publisher) comics that would be good if you like that kind of story? 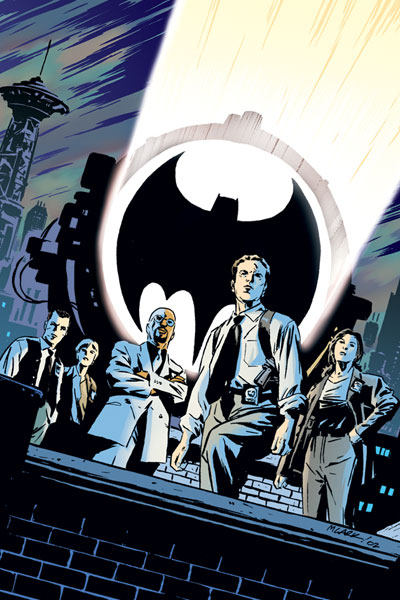 Tom King’s Grayson…? Not sure if that counts as cop story though.

You could read the Nightwing series from the 90s if you like. Dick Grayson works as a police officer in Blüdhaven.

And if you’re interested in picking up where Gotham Central leaves off, Renee Montoya’s story continues in 52.

Batman: Officer Down is a (mostly) good primarily GCPD-focused story arc by Greg Rucka (among others), so that’s probably worth a read.

I haven’t read most of it, but in the original Checkmate series from the late '80s, a lot of the main cast were cops who’d been recruited for spywork, so there’s that, too.

Brian Michael Bendis’ Powers may be what you’re looking for. It was very long running, and even switched publishers, if I recall correctly. I only ever read a little piece of it, but it’s good, and exactly that kind of superhero procedural thing. Think it was also adapted into a show, but haven’t seen it. Btw also dig Top 10. A very underrated Moore piece that tends to get lost in the shuffle!

He’s a CIA guy though.

@DeadmanBrand
Thanks for the rec! Did some looking into it. Seems exactly like what I’m looking for. As for your comments on Top 10, I couldn’t agree more. That and his Miracleman are so sorely underread.

You got it @Batwing! Hope you enjoy it! Also feel the Miracleman. It’s actually one of my top Moore stories (1. Swampy 2. MM 3. From Hell). If it were better known I think it would be recognized alongside Watchmen, although it’s admittedly a little uneven at first. But the Olympus arc can’t be beat!

I just read the first two issues of Gotham Central. I’m going to be reading this for the next week or two.

@hotstufflouieb
Yeah, it’ll go fast. Hope you like it!

I just finished up on Soft Targets. At first I was thinking Deadshot was going to be the villain. Parts of this story were reminiscent of The Dark Knight. The Joker really spread terror during the holiday season. Looking through the eyes of the police, Batman just comes in and sort of ruins lives. Sure he swoops in to save some people but the cost is pretty high when you have him kill some cops in the precinct. The one character has her hand shot off and a few issues before that lost her husband to Mr. Freeze. Gotham is a place I wouldn’t want to live in that’s for sure!