The premiere of the show is almost around the corner (more than a month left to wait). Still a ways away, but close enough to where we’re starting to see the marketing engines heat up.

Very recently, advance review copies of the first three episodes have been sent out to critics and journalists. Attached with those episodes is none other than a personal letter from the show’s creator and co-showrunner, Geoff Johns.

Most of you already know this, but here’s a brief reminder: the character of Courtney Whitmore, AKA Stargirl, was created by Johns for his first-ever DC series Stars and S.T.R.I.P.E., and is heavily inspired by his sister, Courtney Johns, who died in a plane crash in 1996.

Warner Bros. Television has yet to lift embargoes on reviews, but they have given permission to several outlets to share the letter. If it’s fine with the mods here, I would also like to share this letter with the DCU community.

This is a character very near and dear to Johns and her fans, and a character who very much represents hope. In turn, I would like to offer a little bit of that hope for anyone who needs it here.

The letter reads as follows:

To Everyone About to Watch Stargirl -

I know you have real life concerns to deal with, as we all do, so if you are watching these I hope it’s to take a break from it and I’d encourage you to watch Stargirl with your family. It’s what the show was created for and what the show is about – and, quite frankly, right now is the time to be with family.

My entire career began with heroes. A cold call to Superman director Richard Donner’s office landed me an internship that eventually led to me being Dick’s assistant in 1996. During that first year working for him, my sister - Courtney - was killed in the TWA flight 800 disaster. Courtney was on her way to France as a foreign exchange student. She was 18. She was smart, funny and endlessly enthusiastic. Dick bought my ticket home to Detroit and told me I would have a job waiting for me in Los Angeles whenever I was ready to come back. That fall, we shot a film called Conspiracy Theory in New York. He invited my parents to the set and put them in the movie. It was the first time I remember them smiling and having fun since my sister’s death. Dick was my hero for that.

A year later, I sold my first comic book proposal to DC Comics. It was called Stars & S.T.R.I.P.E… The premise, which is also the premise of the show, was that teenager Courtney Whitmore’s mother, Barbara, marries mechanic Pat Dugan and Courtney (reluctantly) moves with them from Los Angeles to Nebraska. In Nebraska, Courtney discovers that her new step-father used to be a superhero sidekick and steals his partner’s old stuff, taking it for a joy ride. Ultimately, Courtney takes on the mantle of Stargirl and Pat is forced to come out of retirement and becomes a sidekick to his step-daughter as S.T.R.I.P.E. It is a story about how family is created by bond, not blood. Stargirl was, obviously, named after and inspired by my sister, Courtney. It is her spirit and optimistic energy that I wanted to put back in the world with Stargirl. It is celebratory, forward-looking and positive. And I hope that comes through when you watch these episodes.

I’ve written a lot of superhero stories in my career, but this is by far the most personal on every level. The cast, crew and everyone involved has given their talent and passion to bringing Stargirl to life and I couldn’t be more grateful for them. I think their hard work paid off and, at the very least, I hope you smile a few times while you watch Brec Bassinger, playing Courtney, and Luke Wilson, playing Pat, take up their mantles individually and together.

I apologize for the length of this “introductory” note. Weeks ago, I had thought it would be a simple paragraph or two. But now, I almost feel apologetic for assuming you have the time to watch Stargirl. Again, thank you, and if anyone wants to talk further about the show, I’d be happy to.

Best to you and your family – 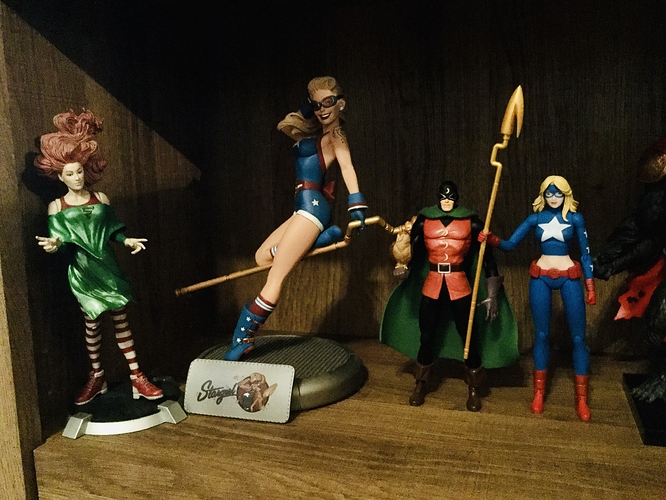 Awesome intro for the show. Geoff should record a short video introduction.

That’s one of my favorite figures of Courtney.

Same. I’m so happy with both of them. Both look way better in person.

Ah man. The emotional tugs at my heart strings Wow!

Thanks for Sharing & I am looking forward to the Show!