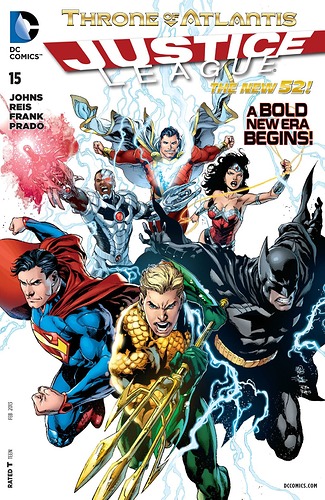 Yeah, we’ve all heard the jokes. The Man of Steel, the Dark Knight, the Amazon Warrior, and…the blonde dude who talks to fish. Ever since the days of Super Friends , Aquaman’s inclusion in the Justice League has been the subject of mockery, from MAD Magazine to late-night talk show monologues. But as we celebrate Aquaman’s 80th anniversary this week with a spectacular new anthology comic, it’s time we get real—without Aquaman, there wouldn’t even BE a Justice League, let alone the world they’re trying to protect.

Don’t believe me? Well, read on! Here are just five occasions of Aquaman stepping up and pulling his so-called “betters” on the Justice League out of the fire.

The Justice League of the New 52 era was assembled in a storyline set five years in the past to fight the forces of Darkseid. But their first major crisis of the modern era was against the forces of Atlantis—as commanded by Aquaman’s traitorous brother, Ocean Master. As the League struggles to contain the fallout of a war stacked against them—the world is 70% ocean, after all—only Aquaman’s own right to the throne allows a path to peace. Sometimes it’s good to be the king.

To read all 5 events in our list, head over to DC Comics!

Are you a fan of Aquaman? Let us know in the comments below!

Am I a fan of Aquaman? I have ridden the wave since the summer of 1966 when I purchased my first copy of Sea King’s book with issue #28. Does that make me a fan?