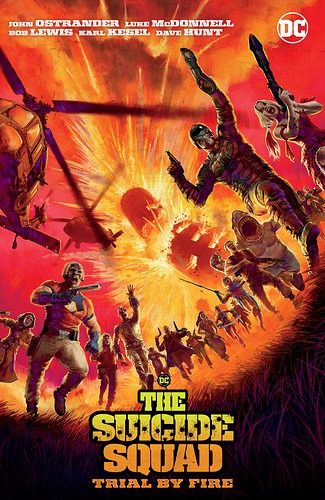 So, you just finished watching The Suicide Squad and now you feel like checking out some of the comics. Well, you’re in luck. Not only is practically every Suicide Squad comic ever written available on DC UNIVERSE INFINITE, but you’re going to find an enormous hit rate in terms of quality. Issue for issue and series for series, Suicide Squad has remained one of DC’s most consistently exciting and eclectic titles in its library. And how does the book manage to stay so fresh after all these years? It all goes back to the extremely adaptable and versatile formula that creators John Ostrander and Luke McDonnell laid out in their very first volume, Suicide Squad: Trial by Fire. Everyone who’s ever needed to write a Squad story could look to those first eight issues as their bible and come away with a new and interesting story to tell within that milieu. Whether it’s Rob Williams, Tom Taylor or James Gunn, practically every Squad writer has found gold in mining the creators’ original formula. So, let’s take a deeper look at Trial by Fire and see what rules it sets for writing any great and memorable Suicide Squad story.

What are the best kinds of allies? Don’t answer that, it’s rhetorical. The answer is “unlikely allies.” Disparate characters thrown together and forced to cooperate through shared misery and circumstance is always a recipe for interesting character dynamics. And with Belle Reve’s Task Force X program putting inmates together to work toward a common goal, Suicide Squad always keeps that dynamic in play with as many variations as there are possible configurations of the team.

But it’s not just the personality clash that keeps the book interesting, it’s the way Amanda Waller’s hand-picked team’s powers and abilities play off one another, creating beautiful moments of synthesis when taking on enemies like Qurac’s Jihad or the Soviet “People’s Heroes.” The infinite adaptability potential of the team provides room for combinations of tactics and action you’ll never see in any other book. At least, when they’re not clawing at each other’s throats, though that can be just as entertaining. After all, there’s a good reason that Deadshot and Captain Boomerang have been a fixture on the team for so long. Their animosity towards each other is simply too good to miss.

To see the full set of rules that Trial by Fire set for future stories, head over to DC Comics!

Have you checked out Trial by Fire yet? Let us know your thoughts in the comments!