First Look: Superman and the Authority Head to Warworld 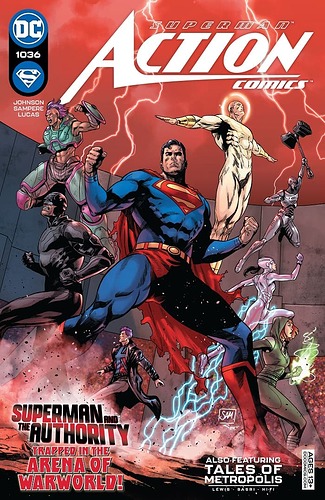 For generations, the brutal despot known as Mongul has ruled his realm of galactic gladiators known as Warworld with an iron fist. With his eye on conquering and enslaving innocent lives throughout the cosmos—and his unhidden desire to add the Man of Steel to the ranks of his fighters—Mongul has clashed with Superman and the heroes of the Justice League often over the years. And yet, he’s never been fully deposed. Each time he’s been taken down, another Mongul has risen in his place, crueler than the one before. For the poor souls fighting for their lives on Warworld, freedom has been a distant dream, with the only hope of ending their turmoil arriving at the end of a sword or axe. In the eyes of Earth’s heroes, it’s as if Mongul ceased to be a problem once he left our orbit. Out of sight, out of mind.

It’s a shocking, almost unbelievable truth. It’s at odds with everything Superman says he believes. And it ends now.

To learn more about Action Comics #1036 and check out some awesome variant covers, head over to DC Comics!

Are you excited for a new storyline in Action Comics? Let us know in the comments below!

Still behind in my Superman reading, but I did read the Superman and The Authority books that lead into this storyline. Looking forward to it.

Are you excited for a new storyline in Action Comics?