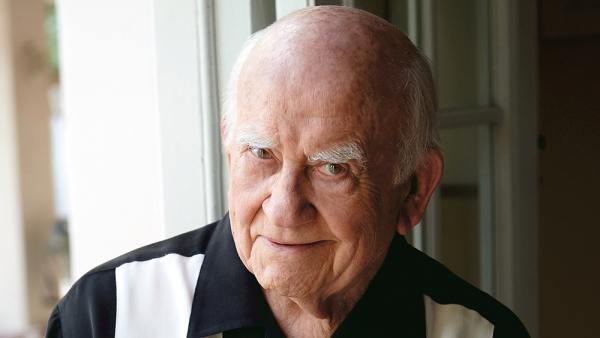 Seven-time Emmy-winning actor Ed Asner, who starred as Lou Grant on both sitcom “The Mary Tyler Moore Show” and hourlong drama “Lou Grant” before a late-career rejuvenation through his poignant voi…

Today we got the sad news that iconic TV actor Ed Asner passed away at 91 years old. Among his many roles during his decades-long career, we were fortunate enough to have him voice DC characters in a few different projects. In the DC Universe, he’s probably best known for his turn as Granny Goodness in Superman: The Animated Series and Justice League Unlimited, as well as the Superman/Batman: Apocalypse animated movie. Elsewhere in the DCAU, he voiced Roland Daggett on Batman: The Animated Series and Hephaestus, also on JLU. He made appearances in All-Star Superman as Perry White, Young Justice as Kent Nelson and Teen Titans Go!'s Freakazoid crossover as Sgt. Mike Cosgrove. And more than 20 years after his first DC appearance, he was able to make a live action guest appearance in Doom Patrol as Ed Garvey, a mysterious hospital patient who befriended Rita.

Though this is quite the notable filmography for DC, it’s only a fraction of the roles he had during his long and memorable acting career. It’s a sad day for DC and Hollywood, but we can still take time to celebrate his life and the joy he’s brought to us as fans through his performances. Rest in peace, Ed, and thank you for all the memories.

I must now return to Granny’s love and care.

I still read 2 characters in Ed Asner’s voice in the comics: Granny Goodness and Perry White. Even though he only had 1 turn as Perry, I always thought he was absolutely perfect as the cranky, hard-nosed but dedicated editor-in-chief, so it just felt like a natural fit to keep that going in the comics

I loved him as Cosgrove on Freakazoid!

He had one amazing career. His work will live on forever.

I found out he was passionate about comics and did a lot of work for CBLDF. Apparently, his favorite comic was Plastic Man. And even though it’s not DC, anytime I’m reading comics about a certain wall crawler, I hear him when I see a certain newspaper EIC taking about needing more pictures!

He was J. Jonah Jameson in Spider-man the animated series.

Great tribute write-up! Hard to believe he was playing the voice of authority (i.e. oldest guy in the room) on Mary Tyler Moore 50 flippin’ years ago.

Yeah saw this.
Very sad
A great career and seemed like a great guy. He lived a nice long life.

May is work continue entertain.