Well, it depends on what Earth One you’re talking about. The explanation for the original Earth One can be found here. From the Silver Age on, that’s the Earth most DC Comics took place on, while Earth Two is where the Golden Age characters (like the Jay Garrick version of Flash and the Alan Scott version of Green Lantern) lived.

I’m guessing you’re talking about the Earth One graphic novel line, which is fairly different. This can be likened to the Marvel’s Ultimate Universe. Here, popular DC characters are reimagined in a more modern day and grounded setting. Some characters, like Superman and Batman, stay fairly close to the original sources, whereas others such as Green Lantern and the Teen Titans, are much more radically reinvented.

A total of ten graphic novels have been released so far: three Superman books, two volumes of Batman, Wonder Woman and Teen Titans, and one of Green Lantern, although the sequel to GL is expected at sometime later this year. Unfortunately, due to the deal DC Universe made with Comixology to get the expanded digital library, none of the Earth One books are on here, as they’re all graphic novels. They’re all still really good, though, and I’d suggest that you check them out if you’re curious.

I hope this was helpful.

How often do they come out

That’s a tough question. That’s really dependent on the creator. I know the next one is volume two of Green Lantern and we should be getting volume three of Batman sometime after that.

Yeah, it often seems like the Earth One books aren’t the top priorities of the creators. They’ll work on them for a little while, put them away, come back, that sort of thing. It’s not hard for something to preempt the books; for example Geoff Johns and Gary Frank were working pretty hard on Batman, but then they turned their collective attention to Doomsday Clock. When they do come out though, they’re amazing.

@TornadoSoup Yea, it certainly seems like that. Any time I see Johns and Frank on a project, I already know it’s never gonna stay on-schedule. Sure, it’ll look amazing and be one hell of a story, but you’re gonna have to wait a long time for each issue to come out or for the eventual collected edition…which will only come out when the story is complete.

I will say a surprising entry in this series has been the Teen Titans: Earth One books. It felt very much like a script for a show or a movie turned into a comic which was jarring at first, but once I got into the story, I really liked it.

If I have to pick my least favorite of the line, it’s the second Wonder Woman: Earth One volume. I can see what Morrison was going for, but I don’t think it was executed well.

The best way I can put it is it is what if DC characters existed in the 2010’s, they are very grounded and realistic, kind of like Watchmen without the analization. They usually come out in small burst here and there, but it is often quite.

It doesn’t help that the New 52 essentially made Earth One redundant. Imagine if Marvel had introduced the Ultimate Spider-Man and X-Men titles in 2000 and then hit the hard reboot button on Earth-616 with J. Michael Straczynski’s Amazing Spider-Man and Grant Morrison’s New X-Men in 2001. Of course, that’s not what Joe Quesada did because even Quesada wasn’t that impulsive and self-defeating. (New 52 rant over…for now.

On the plus side, I think Earth One is more enjoyable because it was it’s own thing; it didn’t rewrite anything to boost sales. And, I think getting them every now and then doesn’t fatigue readers…okay, it kind of sucks there’s no regular schedule for these things, but that they’re still making them after all this time is pretty impressive all things considered.

A good answer would come from understanding DC’s Multiverse concept. Read the series “Multiversity (2014-)” (DC Universe) and that might help understand what Earth One is and how it relates to the other Earths in the DC Multiverse.

The Multiverse, within DC Comics publications, is a "cosmic construct" collecting many of the fictional universes in which the published stories take place. The worlds in this multiverse share a space and fate in common, and its structure has changed several times in the history of DC Comics. The concept of a universe and a multiverse in which the fictional stories take place was loosely established during the Golden Age. With the publication of All-Star Comics #3 in 1940, the first crossover be... 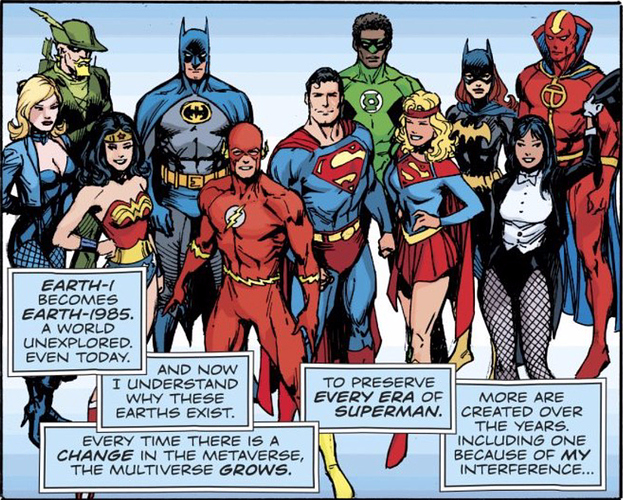 Earth one is the first earth in the multiverse