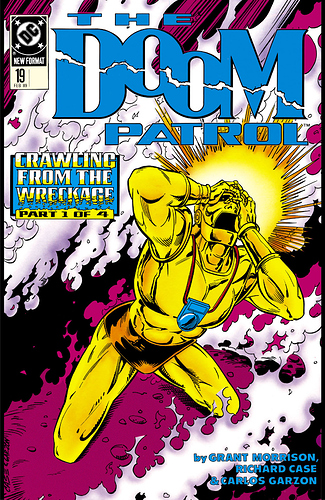 In ‘Crawling from the Wreckage’ part 1, Grant Morrison begins his celebrated run—one of the earliest works of his DC career. After the events of recent issues, the team must rebuild, gaining all new members in the process!

:robotman_dp:Hello Doomsters! And welcome to DPC! This month(switching it up

) is a new run and new set of adventures from Grant Morrison! After recent a falling out, the group must collect back together and bring in new members!

:robotman_dp:As always any and all discussions and thoughts you have to share is great! And…Let’s Discuss! :robotmanscrap_dp:

I think Morrison does an amazing job in his first arc. First, he throws aside any idea of easing into his version of The Doom Patrol. This is full-on Morrison weirdness from the go. We get Cliff in an institution meeting Crazy Jane and we get Larry becoming Rebus all in the first issue. 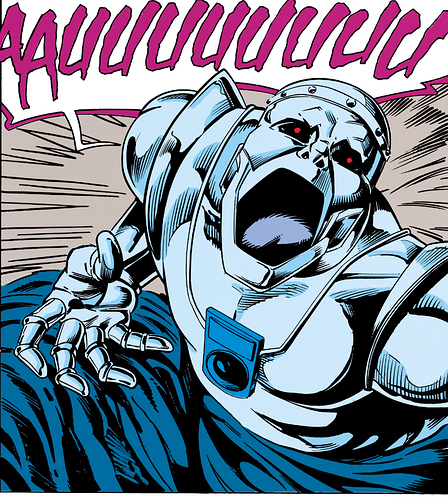 image1272×1419 1.76 MB
On Crazy Jane, I do prefer the television version because it think Diane Guerrero just kills that role. She gives the different personalities a physicality that is missing from the artwork.

image943×2048 1.65 MB
That issue is so engrossing and you actually don’t get a threat till the very end.
The Chief we see is full on Timothy Dalton television chief. He’s eating candy bars and manipulating people for beyond what the Silver Age chief did.
The Scissormen make a nice henchmen threat, with what happened to Josh really disturbing.
Finally, the end of the threat isn’t really about the giant fight outside, but just this little brain bomb the Rebus lays on them.

I give this an A

Yea, definitely agree. From the get go with Morrison he throws a completely different take than everyone else and feel that makes him unique. Also do agree about the Chief is like the DCU show version and that with Crazy Jane, Diane Guerrero fully embodies that character. With the Rebus, feel they’re a different enemy than the usual we see, thanks for thoughts on this @msgtv

Morrison’s run is really where I fell in love with Doom Patrol. It seemed like the avante gaurde plots he threw us into right off the bat were perfect for the team of movie monsters turned heroes.

Definitely do agree with ya there :robotman_dp: