I had really been looking forward to the release of the Doomsday Clock complete collection, but I’ll admit that my excitement was tempered when I saw that it was apparently set to be released in paperback format instead of hardcover. But it returned when I noticed an in-house ad for the book DC released a few weeks ago said that it would actually be in hardcover: 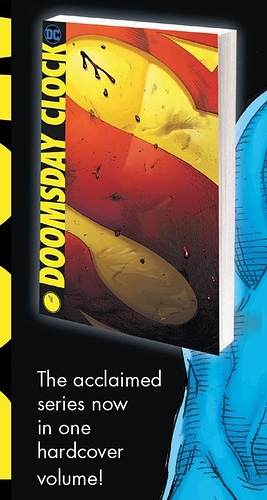 This gave me hope that the book would ultimately be available in my preferred format. However, between online listings not changing and my local comic shop confirming that the copies they received are still paperback, I’m just left confused as to why this was even put out there. I have to assume there was some miscommunication and whoever put this ad together didn’t realize the book was paperback instead of hardcover. Whatever the case, I just needed to vent, as it’s really unfortunate that a book of this caliber still doesn’t have a full hardcover release nearly 3 years after it began, especially considering the collections for parts 1 and 2 were in hardcover

I got the two volumes. I was psyched to get a slipcase when I bought volume two. Not sure why they wouldn’t go for hardcover on the complete volume.

I’m left wondering the same thing. A story of this caliber/magnitude really deserves a full hardcover version, and it’s incredibly frustrating that we’ll have to wait quite a while longer for that, probably when the inevitable Absolute is released

Trust me, DC’s going to release Doomsday Clock in every flavor they can (including hardcovers of all kinds) over time. I’m sure it will be an evergreen title they consistently refresh every few years.

As for why the initial complete collection release was incorrectly labeled as a hardcover in that ad…probably (as you theorized @arkhamassassin) a miscommunication/typo that was noticed at the last minute, but it was too late to fix, so they just let it go. It happens.

I certainly hope you’re right about that. Normally I wouldn’t care too much about what format it’s in, but Doomsday Clock is different. I’ve just put so much emotional investment in that story and it actually lived up to all the hype I put on it, so I’m willing to hold out until we get a proper hardcover version, even if it’s gonna be more frustrating to keep waiting

If their view of releasing Doomsday Clock is anything like Watchmen, you’ll have a complete Deluxe Edition hardcover, an Absolute Edition, a Noir edition, an Annotated Edition and more before you know it.

In the meantime, you can get the two individual hardcovers and binge the series. Then, when a complete hardcover comes out, sell the separate volumes and apply whatever money you get towards the all-in-one hardcover.