Does DC Need a Jim Shooter To Take the Reigns?

To preface the question, Jim Shooter was the 9th Editor-in-Chief of Marvel Comics from 1978 to 1987. He oversaw many successful runs like Frank Miller’s Daredevil, Walt Simonson’s Thor, Chris Claremont & John Byrne’s Uncanny X-Men, John Byrne’s Fantastic Four, and Roger Stern’s Avengers and The Amazing Spider-Man. On the DC side of the mainstream Comics Industry, he is most well known for his run on The Legion of Super-Heroes.

Jim Shooter was well known for running a tight ship, perhaps even too tight as the years went on. Regardless, his tenure at Marvel resulted in what I consider one of the fruitful creative eras for the company, second only to when Jack Kirby and Steve Ditko were still around.

Now, the question: Does DC need someone like Jim Shooter to right the ship? Ever since the New 52, there has been no consistent editorial direction, and it has only gotten worse since Geoff Johns stepped down as Chief Creative Officer, leading to titles being at cross-purposes with each other (Three Jokers and Joker War being a prime example), writers not being reigned in by editorial staff (like Scott Snyder continually doing his lackluster Grant Morrison impression), and continuity being more nebulous and difficult than ever. But that’s just my opinion. Thoughts?

That said, Marie Javins only got the job of EIC mere months ago. We should give her a chance before we start clamoring for a changing of the guard.

I think the new management, perhaps influenced by AT&T push for profits, not Continuity, ia throwing a lot of ideas in the air that could be very good, if executed well, without abandoning the characters we loved.

Instead of Future State eliminating Clark, Bruce and Diana

we get new titles with Jon Kent, a Brazilian Wonder Girl and a new Batman. Jason Todd also operates in this new world and is not abandoned.

Our Favorite Live Action and Animated Videos are coming back as comic books with Superman 78, Tim Burton Batman and Justice League Unlimited. These are perfect titles to bring fans of these videos in, with very limited Continuity knowledge required.

Tom Taylor is being used to a greater extent atarting with Nightwing and soon Jon Kent Superman.

Grant Morrison on Superman and the Authority with Apollo and Midnighter

Wally West is back as the Flash while Barry Allen is part of a Justice League Multiverse headed by President Superman, which might include Captain Carrot

Wonder Woman is out of Continuity but still published on an exciting new journey.

Batman is being worked on by many good storytellers, from the original 1939 Detective Comics Batman to the current Bruce Wayne to the one in Future State.

If the Joker interests you, he has his own title, perhaps because having won an Oscar.

Supergirl is coming back

Teen Titans Academy reunites the old team while giving us new members including Shazam without his family, making him unique once more. And there is new of a new Shazam mini springing from Academy

Bendis is a much better fit with Justice League than Superman, infusing the title with energy with old favorites Green Arrow and Black Canary and new members Hippolayla, Black Adam and Naomi. Black Adam and Naomi may be there because of the upcoming movie and tv show, but that shows synergy within the company

Swamp Thing may be back even though not Alec Holland

Booster Gold and Ted Kord Blue Beetle will have a new Mini Series.

Wonder Woman in World War II with the JSA (with Hawkman!, Jay Garrick, Black Canary and Hourman ) in the direct to video animated film next week may herald a JSA title

The new DC Book Club
Is maturing, realizing that the title covered should be easy for new readers. Supetman Smashing the Klan is way more easy to read than Scott Snyder very complex and loaded with prior Continuity Justice League.

Giving selected titles like Fortnight and I think the new Milestone comics here on the same day as published anywhere is a very good benefit to members. It also could increase Locsl Comic Book sales as a Try Before You Buy effect could increase sales for those who still strongly prefer physical copies, so they can appreciate the art more.

Batwoman on CW may be a disaster but the new Superman series is well done, suitable for a wide range of audience, from conservative small town values to truth and justice.

Each day there is talk of new stuff

Now if only management could think of supplying the local comic book stores what is coming in July, so they could order these comics.

It is the details that need work

Bendis is a much better fit with Justice League

Though Tom Taylor is doing good with Nightwing

Now if only management could think of supplying the local comic book stores what is coming in July,

Seriously, where are the solicitations? Even though my reading list has declined I always look forward to the solicits. 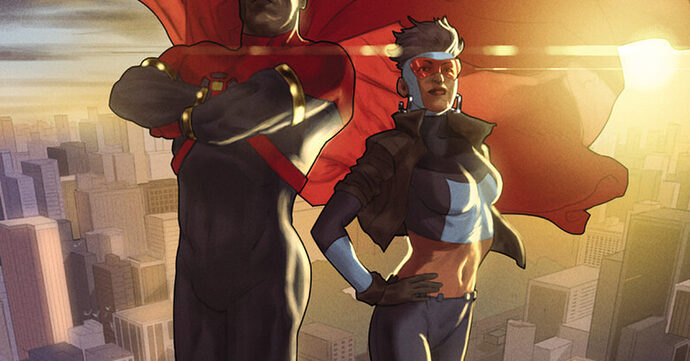 Last year, Adam Phillips, former Director, Marketing Services at DC Comics, who did the regularly monthly solicitations was made redundant. It was his

Agree 1 million percent. Jeanette had things running real well, I thought anyway, back at that time. Seems to be kind of a revolving door these days.

Legion needs to come back.

Not a fan of Bendis Legion

Shooter and Levitz did good work

My favorite version for beginners is

1994 in the Zero Hour Crisis issue 61 of Legion of Super Heroes (1989) , two sets of Legionaires gradually fade from existence For LSH ifans, issue 61 is both sad and triumphant.
The Legion storyline starts again in a clear entertaining way, with the origin of the LSH by its three founders in two books Legion of Super Heroes and Legionaires. Both titles start with a 0 issues, then alternate LSH 62 then Legionaires 19 then 63, 20, 64 21, 65, 22 etc.

Personally it seems that every company taken over by ATT gets worse. DC and Dirctv are examples. A good creative and editorial direction is definitely needed. I agree a Jeanette Kahn is needed. Jim Shooter is interesting since I thought there was a lot of controversy with him and his leaving Marvel, but maybe someone like him is needed. They need to have one well thought vision and work it completely amongst all their editors and writers. Maybe they should make Geoff Johns the publisher.

Geoff Johns is a great writer but often does not meet deadlines, which reduces greatly the momentum of his books.

He has been accused of allowing abuse of actors on the movies he was involved in, which may or not be accurate. Maybe he was too busy to closely monitor the situation.

He has also been removed from most executive positions he was in.

His skillset may be in storytelling, not management. Ideas and great knowledge of DC, not managing

Or a Karen Berger, but she’s got her own thing goin on. Still, someone of the type. An ACTUAL editor able to deal with creative folk and guide the whole enchilada thru the forest.

She was with Peter David, at his best, for years so she knows how to handle the big names. Hopefully, those said big names LISTEN.

Yeah, I got the feeling he was stuck doing an executive job that he had no business being in and got caught in the crossfire. He is great at certain things in the DCU, but managing is not one of them.

Agree - I wouldn’t be sad if they treat Bendis run like the threeboot, then come back to the Reboot era where Lo3W never happened.