“Superman cereal?” he says,in the cereal aisle. “Why not?” as he puts the box in his basket.

Glad you enjoyed the story

@Jay_Kay I’m not sure why they went the way they did with the intentional misspellings of crisis and crimson. Maybe Mike Carlin (editor of the Superman line at the time) thought it’d make the story stand out more?

This story predates Mortal Kombat by two or three years, so maybe someone involved with that read this story and thought “Hmm, a “k” in place of a “c”. What the hey, it worked for Superman, it’ll work for us too!”

One day left to comment on this crimson caper! Thanks to those who’ve done so so far

Tomorrow begins something new and different!

@Jay_Kay I don’t know I missed this when I initially read your comments, but with regards to how you felt Superman’s armor in the Action Comics issue of this arc reminded you of an action figure, you’re not that far off. Observe the picture below:

There are certainly differences between Superman’s armor in Action and this figure, but it’s a safe assumption that this figure was inspired by that comic design as it came out in 1996, six years after Krisis of the Krimson Kryptonite was published. 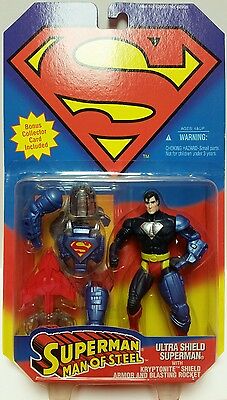 I now have my reading assignment for Thursday

Adventures of Superman 472…love it!

Everyone seems believable, down to earth…even Sam Lane…your adult kids sure can weigh on you heart, he’s right!

Ingenious, painful though to see Supes cut himself shaving and dealing with the humiliation of being late etc that us regular folks deal with…

Roger Stern is a fixture up here in Upstate NY, living in Ithaca now with his wife Carmela. I also enjoyed his novel 'Death and Life of Superman." Always a treat to read his comics, both DC and Marvel.

Fun story, although hard to digest or understand the other plot developments from the regular Starman series interwoven in.

Stern again at the writer’s helm. Great team work story with the other lesser-powered heroes assisting at the jail. Wow, Superman almost bought it in that last scene with the escape rocket. Careful there, non super powered pal!

The pre “death of Superman” writing and artwork teams for the Superman books at the time were a well-oiled and highly-entertaining machine!

Oooo. I didn’t see that special “50” coming. What fun! Lots of fun plot twists, how Superman gets back his powers is acceptable and not “deux ex machina” nonsense, instead it’s “rules.”

Yeah, fun to see the FF show up to celebrate the issue. Again, how fun to have Sam Lane likable in this era.

While a crazy time had trying to piece all this together in order etc, this story comes dangerously close to a 10 out of 10 rating!!!

Read the first 2 in this arc today. Once again @Vroom great choice. I have never read this story and was shocked to find out that Lex had a child with Perry Whites wife! I really like the second story with Batman… I mean Superman having to take on Mammoth with just his wits and a few gadgets from Dr. Hamilton. Also what a great conclusion to the fight with Superman physicking out Mammoth. I am curious if it is actually red K though from what I remember of its effects is that it puts Sup’s in a state of rage. Fun fact which I’m sure @Vroom already knows is that K was originally red in color when first introduced.