Greetings once more fans of all things Super and welcome to our third week of action and adventure!

This week, the focus shifts to the early 1990’s. It was a time of Saturday morning cartoons on the major TV networks, The Dark Knight Collection, MC Hammer was telling the world “U Can’t Touch This!” while Paula Abdul was Straight Up with us, Saturday Night Live was still funny, the Fox TV channel had some fun shows on and of course, Batmania was riding high once more. Amongst all of that however, there was… Superman!

In this story, Lex Luthor gains the means to be as strong as his mortal enemy. Or does he? Read on to find out!

What you need to read for this colossal crimson caper:

Bonus Question: The Starman from this arc has been a fixture in the current Justice League series. Are you reading his adventures there?

Krisis of the Krimson Kryptonite was the last major Superman story before the fabled Triangle Era officially began in Superman #51. It’s a unique story at the beginning of a decade that would prove to be one of the most notable in the history of the Superman franchise.

This spoiler laden discussion runs one week from today, July 5th until next Friday, the 12th.

Suit up and embrace yourself in (to quote a Superman toy commetcial from the 90’s) “the power, the power, of Superman!” 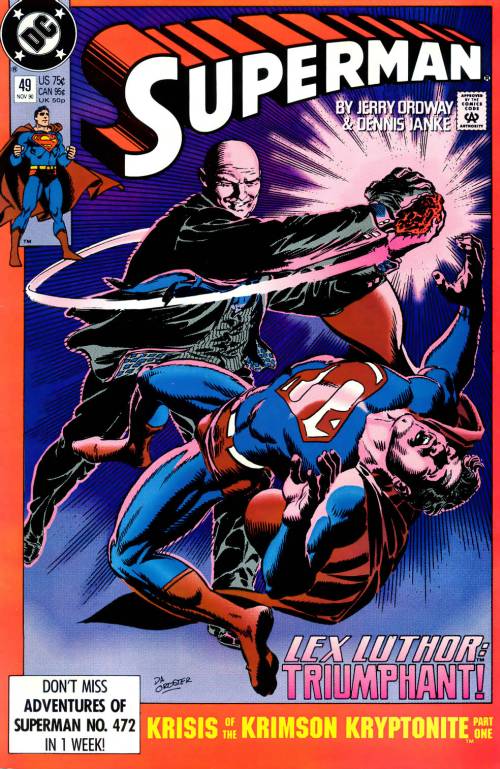 Haha a comic book scavenger hunt.
I can do this. 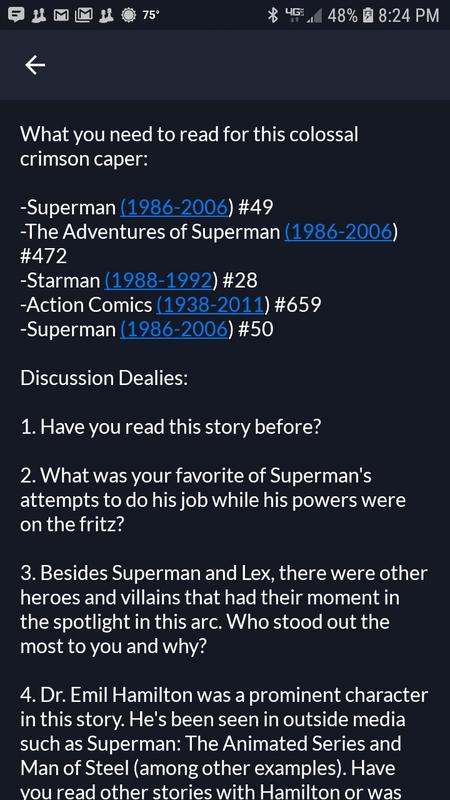 Create public list with the 5 comics for easy reading “Krisis of the Krimson Kryptonite.”

Post easy to use links for others and myself to refer to to dive in without searching:

Huh, never heard of this story before, definitely curious to see what this is about!

@Don-El Thanks for the assist with the links.

Let’s be honest, searching is half the fun. You’ll probably end up coming across a whole bevy of books you hadn’t even thought of reading but now want to due to searching these books out

Half the fun! If that’s literal, I’m not going to be happy.

@msgtv If G.I. Joe has taught us one thing since the early 80’s, it’s that “Knowing is half the battle!”.

Searching for comics is…78.38% fun. In my estimation

I’m a big fan of Jerry Ordway’s art & writing. For some reason his drawings look very realistic to me, they just help me believe in the characters actually being really human. I like this version of Luther it’s kind of need saying Lois & Clark not married yet.

I mean the premise of using magic and red kryptonite to set the stage for this interesting powerless Superman story is a little out there. But the end result of exploring the concept of what makes Superman a hero: is it is power or is it his character? is a great study that we’ll read through here!

Just finished part 3 (book 4 of the series) and it reminds me what a strong supporting cast Superman had outside of the Daily Planet. Sawyer, Turpin, Gangbuster, and Guardian all play a role here. Something that’s been missing since New 52.

@msgtv That bit about Superman’s undies was surprising to me too.

I’m just chalking it up to same color BVDs for the MOS. He likes to match his suit when possible

Just finished it today and I’m honestly a little surprised by how much I really enjoyed this. From what little I’ve read of this era, I’ve never really jived with the 90s era of Superman (even going through all the Death/Reign stuff was a bit of a slog – so, so, SO many Bloodlines annuals, they made my heart cry…), but this was really solid, engrossing stuff!

Since that kind of covers the first question, I’ll go through the rest:

“What was your favorite of Superman’s attempts to do his job while his powers were on the fritz?”

The little kid part of me really liked the exo-suit during the prison break – I mean, homeboy literally looked like an action figure with the rolling joints and everything! I also liked the issue with Mammoth, where he actually used more guile, trickery, and a little bit of bluffing to save the day and made people none the wiser about his lack of power.

“Besides Superman and Lex, there were other heroes and villains that had their moment in the spotlight in this arc. Who stood out the most to you and why?”

For me it was probably Starman. At first it was a bit of hometown pride seeing he was living in my birth state, but his power set is kind of interesting. I don’t know if I would have followed his story in the comics at the time, but now that it’s all on this app, I’m definitely going to give some of his earlier issues a try!

“Dr. Emil Hamilton was a prominent character in this story. He’s been seen in outside media such as Superman: The Animated Series and Man of Steel (among other examples). Have you read other stories with Hamilton or was this your first exposure to him in the comics?”

I think I read him a bit in the Death/Reign era of books, but I don’t think he hung around much outside of the issue where they try to resuscitate him. I liked him here – as a character on his own, he isn’t that compelling in these issues, but he’s a good supporting member, and it’s nice to know that at least this Emil won’t do our boy dirty like he does in S:TAS/JLU.

“Finally, what did you think of how the story ended?”

First, I really liked how Clark eventually got his powers, by confronting Lex as Clark Kent the reporter, with Lex screwing up and slimily trying to change the wording of the deal when called out by Mxy.

The fight with Mxy was honestly kind of felt weak and unnecessary. I guess it was nice to have a showcase of Clark using his power after a month or so of comics not being able to, but ultimately it felt more obligatory than a proper climax.

Though the big thing is really the proposal and Lois agreeing to marry Clark. I was a little surprised by this because I always figured that Clark would tell Lois he was Superman before he would pop the question. Heh, some boy scout, huh?

“Bonus Question: The Starman from this arc has been a fixture in the current Justice League series. Are you reading his adventures there?”

I haven’t been – I kind of lost track of the book around the Drowned Earth crossover. I definitely plan on getting ahead of those, especially with the news that the JSA are coming back through that title.

A point I forgot to write about the Mxy stuff – I did like the more than implied crossover that he’s actually The Impossible Man in Marvel who decides to mess with the F4 when he’s bored messing with Superman.

Also learned, Jimmy Olson wears a bolo tie. Must be going to the rodeo after visiting his mom.

Vroom, how much more meta could you get than having Superman buying Superman underoos in an issue of Superman.

With Jimmy wearing a bolo tie, this came through my mind:

WRITERS: Hey, if people think Jimmy Olsen is lame with the bow tie, maybe people will find him cool if he wore something more current, like a bolo tie!

Speaking of jokes, that reminds me: why did they name this story like this? I feel like they were trying to invoke Mortal Kombat, but it reminds me more of the Ku Klux Klan.

Another satisfied customer. Entertaining story, with a big movement in Clark and Lois’ lives. One of the things that strikes my from this story is how consistent Clark/Superman is as a character over time. Since the 70s at least Superman and Clark have had the same motivations, personality, moral code etc. Batman fluctuates between jerk and silent detective, Diana as a veers from princess of peace to Amazon warrior, and more, but Supes remains steady.

Mxy should keep messing with that orange rocky dude.