When I was a kid, among the few non-superhero DC comics I had were those were from their Star Trek titles. Random issues of the main Star Trek title itself, as well as The Next Generation. I never followed any one book with a strict adherence but I highly enjoyed the issues I did have.

IDW is the current license holder for Trek comics, so it’s highly unlikely we’ll ever see the DC Trek pantheon on DCU (if it can happen at some point, I’d be all for it).

Does anyone know if IDW has reprinted the DC Trek books? I know they reprinted most of the regular Marvel G.I. Joe series, so it’s not unheard of for them to reprint books based on licensed material that was once under different ownership.

I’m curious to hear if anyone else is familiar with the DC Star Trek titles. Creative teams, titles, etc.

I know they did those G.I. Joe books a while back, but I think the DC Star Trek books are in limbo like Marvel’s old ROM stuff.

IDW does a stack of Star Trek, and in fact are the only group publishing anything related to Star Trek in comics or I believe paperbacks. They focus on the “new” Star Trek alternate universe version that came out with the first Chris Pine Star Trek movie.

IDW does have the classic Gold Key original Star Trek comics on Comixology Unlimited. However, no one is republishing the DC run of Star Trek from between the mid 80’s to the mid 90s.

Vroom, I do frequently see those issues at my local flea markets on the weekend.

@DE I’ll bet they’re Dollar Bin books. I have no interest in buying them, but I’m curious what eBay lots of them go for.

I bought 450 DC comics for like 25 bucks the other day. It included nearly every DC Star Trek series. Pretty awesome deal.

Haven’t actually read any of them though because I have DCU which brings me so much more.

IDW just put out a series called Star Trek Year 5 that’s been really good so far, also there’s a mini series going on called Q Conflict that involves the different casts of various shows in a Secret War type of scenario. I recommend both for any Trekkies out there.

Yeah, I might be off on the price. The guy was already offering a crazy deal like ten free and then I think a quarter a piece. Maybe fifty cents but I really thought it was a quarter. A few years ago, I’d just have given him a hundred bucks and taken them all, but because I’ve been doing stuff like this for awhile, I actually have like six thousand comics about half of which I’ve never read and buying things when you see great deals means you don’t usually get consistent runs so it’s just like reading a shotgun spread of content, so running out of space in my house, I was trying to keep it small, but the guy was like, “Want them all?”
And I explained my situation and was like, “It would have to be a crazy good deal,” and he was like, “Give me another twenty,” so I took them away.

I think he has an ungodly amount of stuff and was just unloading all he didn’t want. He had a ton of gaming cards and figurines as well which he was also unloading for dirt cheap.

For my part, I don’t even know what I’m going to do with all these comics. I’ll probably be in his shoes in a few years.

There are trade paperbacks, but I think they are essentially reprints of similar DC trades. I believe they are published by Titan as much as IDW.

Years ago, a company called Git Corp released a CD-Rom of all the Star Trek Comics that had come out at the time. Looks like it is still available at Amazon for a reasonable price.

@Misfit Thanks, that’s good to know. Now that I think about it, I recall seeing some of DC’s Star Trek trades at a local used records store. I might have to soon set course and make it so for that store.

DC’s Star Trek titles were the first comics I ever followed and collected regularly. For me at the time as a newbie, it was either that or Superman, and two titles a month was easier to afford with my allowance than four.

A few months ago, I bought the G.I.T. Corp CD-ROM that was just mentioned, and it was a great value. It has almost every Trek comic ever published (Gold Key, Marvel, DC, etc.) until just before IDW took over the license. I got it for around $20 (on Amazon, I think).

IDW did reprint some of the DC Star Trek Comics. The link below will take you to the listing of Star Trek Archive Editions. Volumes 1-3, 5, and 6 are all DC reprints.

@TravisMorgan Thank you kindly. I’ll look into those.

@brigadier, I believe Pablo Marcos did do some Star Trek for DC. If I’m not mistaken, he was involved with The Modala Imperative, two 4-issue miniseries (one for Star Trek, and one for Star Trek: The Next Generation), one of the few crossover stories DC did. He may have done some other Star Trek stuff, too.

I just found some DC Star trek archives on comixology unlimited FYI… And I’m seeing Curt Swan is one of the artists! 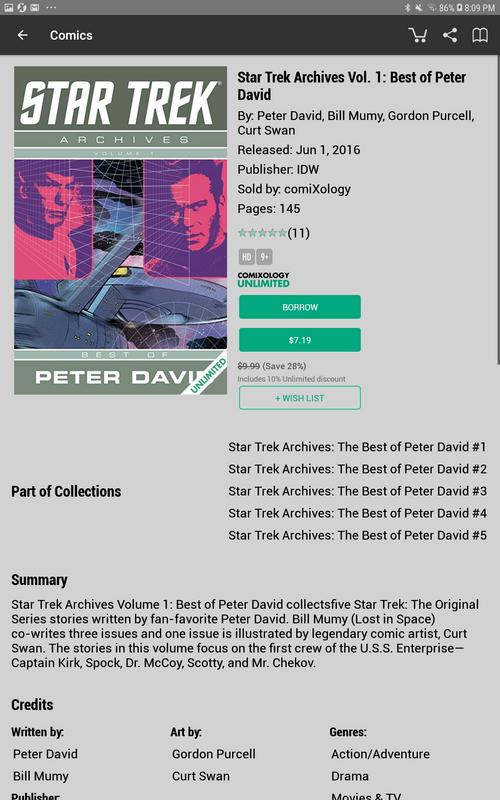 @Don-El Neat! Even neater than Curt Swan was involved.