Before the Flash, Green Lantern, Wonder Woman, Batman and Superman, There was DC Comics. I would love to see DC very first Comic Book that was first published when it first started, in the DC library. To me it would be so cool to see it as a piece of history that started all!

As far as I know, there is no actual comic called “DC Comics.” The letters “D” and “C” actually come from “Detective Comics,” which, I believe, was the company’s first hit comic book. For several decades, the name “DC” was basically a nickname (or brand name) for the company. It wasn’t until the early '70s that “DC” became the company’s official legal name. 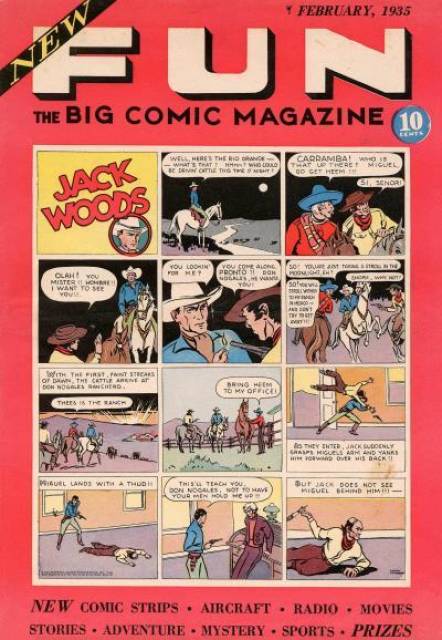 Cool, Thankyou for the info and picture.

Both New Fun/More Fun and New Comics/Adventure Comics were published by National Allied Publications which was started by a guy named Malcolm Wheeler Nicholson, a cavalry officer turned pulp author, turned comics publisher. He came up with the idea of making comics with new material instead of reprinting popular newspaper strips because he couldn’t afford the syndicates fees. It was this lack of funds that led him to partner with Jack Liebowitz and Harry Donnenfeld in order to get out a third book Detective Comics. I don’t think it was a super big hit but it did well enough that Liebowitz and Donnenfeld were able to buy out Nicholson and absorb National when the Major’s debts became too much. DC’s first really big hit was their fourth effort: Action Comics #1 featuring the debut of Superman by Jerry Siegel and Joe Shuster who had already created several other popular features for the other National/DC titles including Dr Occult and Slam Bradley.