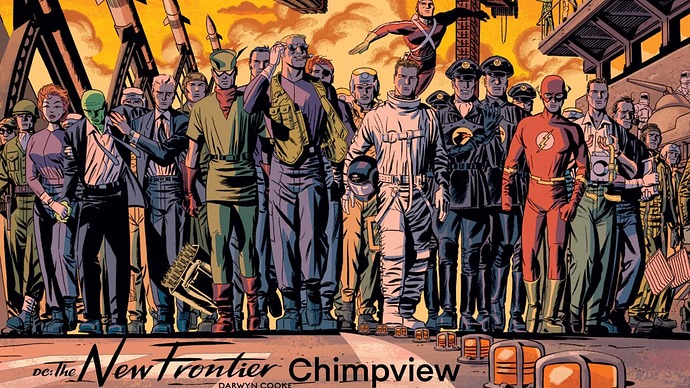 I, as I’m sure everyone can guess, love DC comics. The heroes are a colorful reminder that we can achieve great things, thus we sympathize with the characters, we hold onto hope that they will overcome their obstacles and give us a reason to try as hard as we can to do so ourselves. The New Frontier is everything I love about DC in the form of one unforgettable mini-series.

Everything about Darwyn Cooke’s art is perfect. From the lines, to the colors to the overall style, every single aspect coincides to create an indescribable warmth only so many comic artists are able to pull off. So much care is put into every single page, but what Darwyn really excelled with were his splash pages. A large amount of detail are put into them but they somehow never lose their charming silver age simplicity.

There is not a single poorly written character in the bunch. Each of the main characters have their own reasons for the reader to care about them. They all have their own distinct struggles that, despite their differences, link to the same heroic mission. My favorite moment in the entire book is between Barry Allen and Max Faraday, where they both agree to put away their spite toward one another in favor of the same selfless goal. Even characters less focused on have their time to shine. I keep going back to how well Batman is portrayed even if his scenes can be counted on one hand. Cooke is able to plant his name near the top of my list of favorite Batman writers with such a limited number of comics he’s written that feature Batman. What might be my favorite Batman line is uttered in this comic. I won’t say what it is just in case anyone hasn’t read The New Frontier, I really don’t want to rob anyone of the experience of reading it for the first time.

There are a considerable amount of aspects I din’t love at first but I have come around to over the years. Namely Wonder Woman and, even more notably, the villain. In the first issue, each of the Losers are killed by dinosaurs on an island of dinosaurs. Later in the comic the villain is revealed to be the island of dinosaurs from the beginning, just in case you thought this was a bad comic.

Unsurprisingly this comic scores a big ol’ 10/10 from me.