Reading Bendis’ last issue of Iron Man I got one of those nice little surprises that I really enjoy, a Marvel character making a DC comics reference. Tony turns off a zombie killing contingency with the code phrase “the infinity killed Sue Dibny” You can also find Marvel characters talking about someone’s Kyptonite. Any other examples?

I recall an issue of Mark Waid’s Daredevil where a kid in a school bus sees him swing by and shouts, “IT’S BATMAN!” 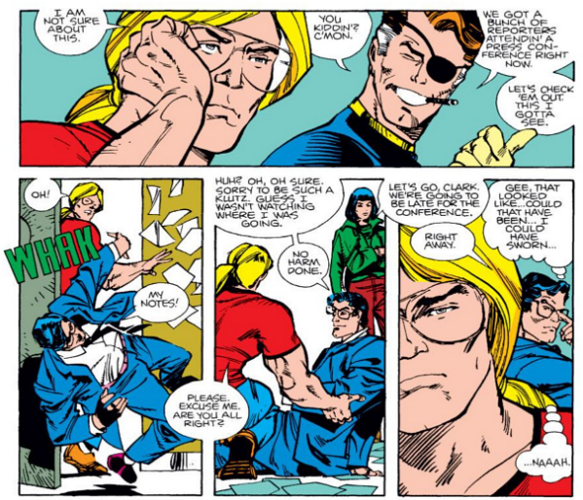 The big one is probably the Squadron Supreme who are thinly veiled analogs for the Justice League (Hyperion=Superman, Nighthawk=Batman etc).

Lois and Clark popping up on the borders of Marvel comics is a grand tradition. If you look close you can see them painted into several of the crowd scenes in Marvels.