DC is 2021 Publisher of the Year, sez Multiversity Comics:

What publishers did the best work in 2021? We highlight some of our favorites in our Best Publisher category for the 2021 Year in Review.

Post any other 2021 DC year-end accolades that you may find in this thread.

Mini-series: Crime Syndicate. A two stories in one mini that starred Earth 3’s greatest villains, with some swell Jim Cheung covers on #s 1 and 2.

New character: Yara. Freakin’. Flor. Why more people aren’t talking about her is a mystery, because she’s quite the badass and has an intriguing story unfolding within the pages of Wonder Girl, of which, she is definitely not the only Wonder Girl in the series.

Most-anticipated mini-series: A toss-up between Justice League vs. Legion of Super Heroes and Trial of the Amazons.

Right now, I’d say JL vs. LOSH, but that’s because little has been said about TOTA at this point.

As a Legion fan, I’m hoping they get a comeback after JL vs. LOSH.

Most-anticipated storyline: It started this year, but 2022 will see the conclusion of “The Warworld Saga” in Action Comics.

As a huge Superman fan, any story touted as “The biggest Superman story since The Death and Return of Superman.” will instantly have me hooked from start to finish.

I made a topic counting down my top 7 comics of the year titled “Chimp’s Best of 2021”.

Nightwing #87 gets my Single Issue of the Year nod.

It’s a one and done issue that features a simple story, but is crafted in quite the eye-catching fashion.

Whether you’re hardcore into Taylor’s run, or haven’t read Nightwing in a while and want something that’s easy to get into and out of, Nightwing #87 is a perfect example of a one and done issue done right.

Plaudits and heartful thanks to my DC issue of the year: Flash #776! Jeremy Adams is killing on this book, and this issue was laugh-out-loud funny.
Best mini-series of 2021: Blue and Gold and Superman '78.

Those are my Runner-Up nods for Best Mini of '21, especially Blue and Gold. 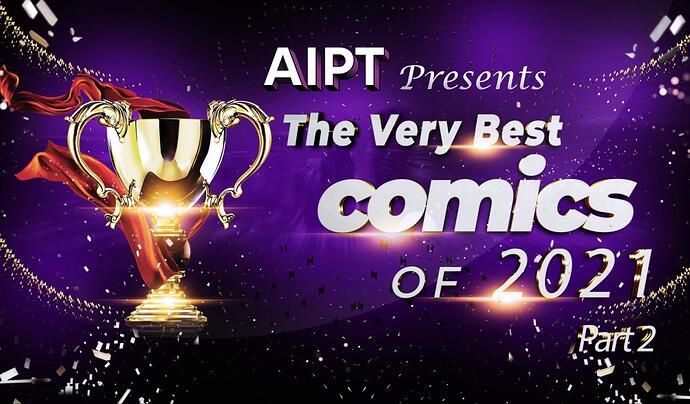 Our best-of coverage rolls on with categories like best maxi-series, letterer, and more.