Last night my wife and I played the Forever Evil DC Deckbuilding Game set with the Rogues crossover set mixed in. It was the first time we’ve combined a set and a crossover (previously we’d only mixed in Crisis expansion cards) and it worked really well. I did come away with one question though:

Like the regular Forever Evil game, Crossover 5 gives you a series of Super Heroes you have to defeat. As the theme of the pack is the Rogues, the heroes are unsurprisingly speedsters. They include Flash, Jesse Quick, Jay Garrick, Max Mercury, Wally West, Bart Allen and… Hawkman? 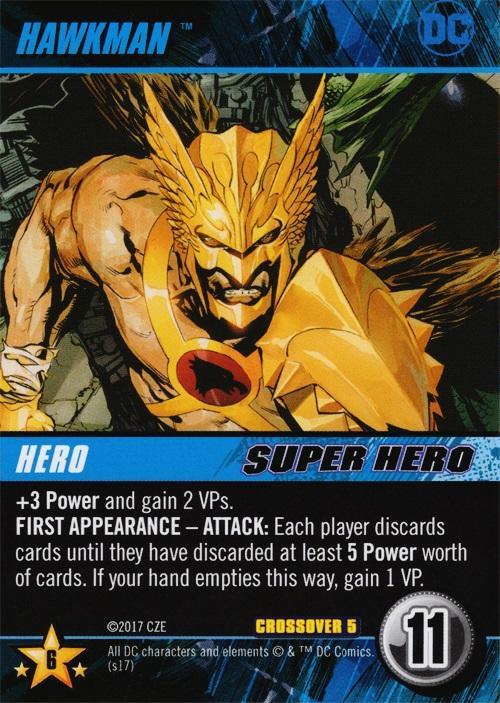 Can anyone explain to me why Hawkman of all heroes would be included in this lineup? I thought maybe my sets got mixed up, but it says Crossover 5 right there on the card.

They needed eight Super Heroes, and for some reason left out Jesse’s father Johnny Quick. They could have also used John Fox or Walter West from the Mark Waid era. It was just really weird playing speedster after speedster and then suddenly there’s a guy in a bird costume with a mace.

If anyone else has Crossover 5, can you please confirm that this is not a bizarre printing error in my set alone?

Yeah, that’s one of the superheroes. Think they were just trying to get more JSA members because of Jay Garrick. It doesn’t make much sense, but it’s the best excuse I have. 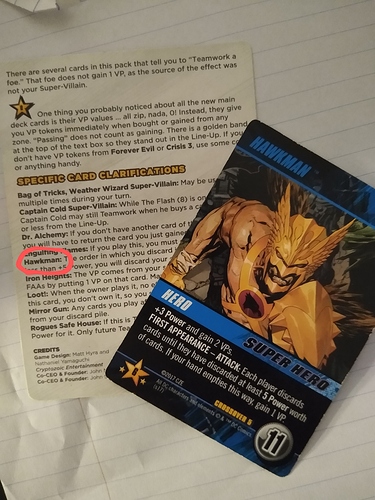 At least it’s good to know I’m not crazy.

This thread is old, but I figured I’d chime in with the answer. The reason Hawkman is included is most likely due to the fact that he first debuted in Flash Comics #1 alongside Jay Garrick, and spent the entirety of the Golden Age sharing an anthology book with Jay.