I’m pretty late to this show, but I watched the animated Legion of Superheroes with my daughters on this app for the first time. They love the female characters, but the team’s roster is usually made up of dudes, so I drew up some fan art with some of our favorite female Legionnaires for them.

I didn’t realize this show covered a few classic story plot lines that I remember from the Legion of Superheroes comics I read so it’s kinda great my kids know why Triplicate girl became Duo Damsel, what happened to Lightning Lad’s hand and that Brainiac 5 is the good Brainiac!

Yeah. I’m a proud nerd-dad. I really wish they made more of this show, the growth from season one and two was great. My hope would be that if they do make a Legion show again that it would feature more of the women, they are such fantastic characters!

I’m glad this app has a few of the Legion titles, I have to confess, I’ve never REALLY read much of them, and only know their stories second hand… 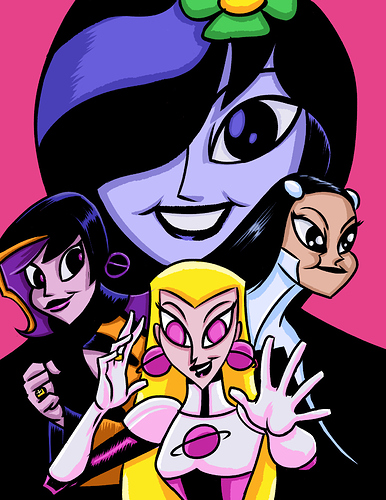 There are so many awesome artist dads on this app. Hope you blew up that beauty to poster size for your girls!

I miss this show. I wish it had been given a surprise renewal instead.

@CynicalPink I didn’t blow it up, but that’s a great idea! Since we don’t get a constant stream of Legion shows we’ve moved onto DC Superhero girls. We like both versions (the old Shea Fontana one was such an amazing primer to ease my my young girls into DC, and we kinda miss it! And the new Lauren Faust one has such great looking animation and super cool fights!).

@J3D28F.17202 I miss the Legion show a lot too. I skipped it when it first aired and now I’m kicking myself for it. They really treated the material with respect but still taking it into its own direction. Bouncing Boy is my fave.

I love that this piece has a Powerpuff Girls vibe and that you made it for your daughters! They seem pretty lucky to have such an awesome dad. I know something like this would have meant a lot to younger me.

Oh thank you! I love the Power Puff girls! And it might be a hokey dad thing to say, but I’m the lucky one to have my girls. It’s very inspiring and re-energizing as an artist to see everything through their eyes! It’s like everything is amazingly fresh again.

Yes, absolutely! That’s why as much as I love the more mature series we get nowadays, I’m glad families aren’t being left out of the loop.