[Characters of DC] Month Three: An Archer’s Tale: The Life and Times of Roy Harper 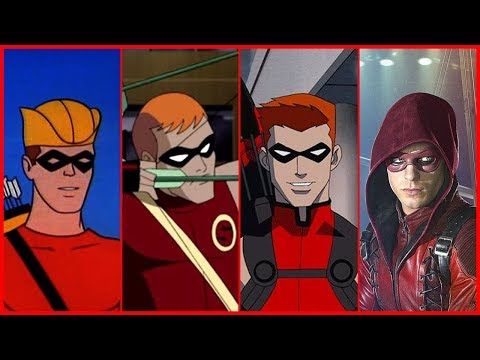 Roy Harper was one of the earliest sidekicks to appear on the scene. He has a vast array of stories and he has been a part of many teams including the Teen Titans, Titans, Suicide Squad, Outsiders, Checkmate, Justice League, and the Outlaws. Whether you like him as Speedy, Arsenal or Red Arrow this month’s activities have plenty for everyone. So here we go….

What to read and watch

If you are interested in joining the Characters of DC Club follow the link or questions DM me @JasonTodd428.

Next Month: Huntress Stalks the Night

JT I’m in, man. Lot of the early stuff I haven’t read so this will be good.

My first encounter with Roy was through his first appearance in the 1960s Teen Titans, which is actually one of the issues here. Its pretty dated these days but I still have a fondness for that era of the Teen Titans and its characters.

In researching the character I came across some material that went back farther than that and that I hadn’t read before so it was a lot of fun for me too. I hope you enjoy reading the older stuff @msgtv

Made my way through week one’s readings. Boy, those Golden Age stories are just flat with characterization. Roy is relegated to a chirpy Greek chorus generally cheering on Green Arrow. 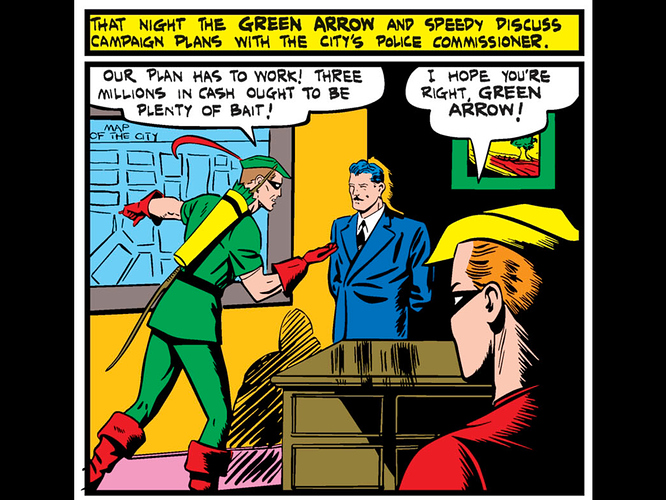 It’s not till we get to the Adventure Comics backups that we get some amount of personality from Roy. Maybe I’m reading into it, but he seems to have a little attitude about these stupid arrows. 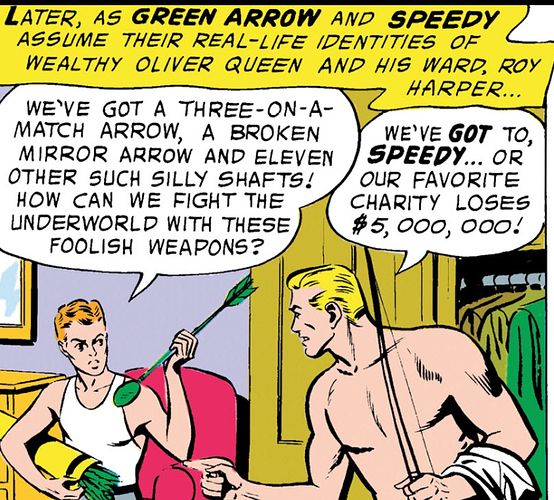 The Teen Titans issues are fun, but Roy’s back to being Robin 2.0 with a bow and arrow. But we do see the beginning of his bad decision making. Maybe don’t drink pond water. 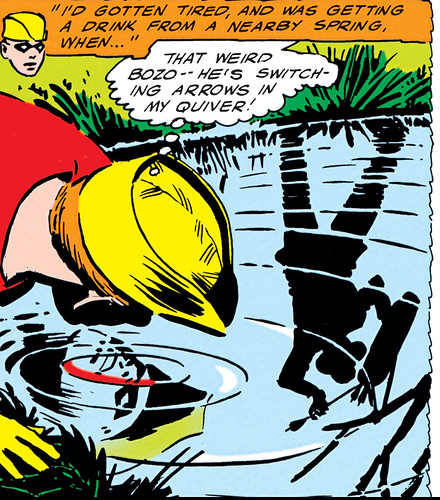 Just what every teen in America wanted in the '60s, a personal note from LBJ. Looking forward to next week when I expect Roy to really step forward. 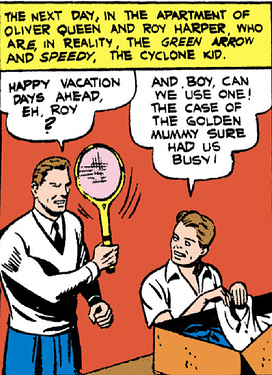 “Send a cease and desist letter!”

“Sir, we own these characters, too!”

On top of that, Mort Weisinger writes their first appearance as if the readers have seen previous adventures with this dynamic duo. And let’s be honest: they had. Not that these heroes will stick around much longer if they keep catapulting themselves at the side of buildings… 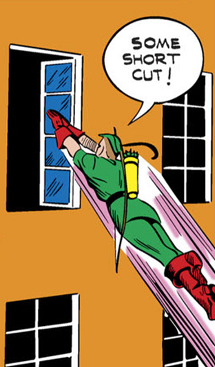 @msgtv I did like Roy’s sass in that panel you posted. I liked it better than the chirpy Greek chorus version of the panel before. The Roy in Adventure Comics is commonly thought of as the “modern Roy” so I don’t think you’re reading to much into that.

@AlexanderKnox I did find the whole catapulting business rather amusing and from the is car no less. Really put me in mind of some of the wackiness in the Batman '66 show and the gadgets the '66 Batmobile had.

I do like the touch of whimsy in these Golden age stories here even if the characterizations are a bit flat. You can tell that these were written for a different audience then comics are these days. The next batch of stories will have a large and noticable tonal shift and not just because of the content.

You can tell that these were written for a different audience

I enjoyed the Silver Age stories, too (especially the “Aquaman and Arrow trade locales” story). I sorta wish that the Legion of Super-Heroes had thought to nab Speedy and make him feel inadequate as they did with Superboy.

Just so I could check all the books as read, I read everything in them not just Speedy. Early LoS are buttholes.

Here we have a collection of a few early adventures of Speedy’s . What did you think of these stories in general and of Roy’s portrayal in them specifically?

Overall, I was entertained, but I agree that there wasn’t any characterization in those early issues. It’s like you could have just replaced Speedy with Robin and the story would have been the same…waaaiiiit, a minute! Are GA and Speedy just a a knock off of Batman and Robin?!?

How would you compare and contrast the early version of Speedy in More Fun Comics with version presented in Adventure Comics? Any major differences between the two characters? Anything you liked better or thought was worse about how the character was handled?

I don’t know that I saw much difference. It seems like it’s not until Teen Titans that there’s a need to give him much personality (and even then there’s not much).

Early Teen Titans Stories: What did you think of the interactions between him and the rest of the team?

I like that he’s a bit of a smart ass. That checks.

How do you feel about the character’s development at this point in his existence?

There’s not much there yet outside of “smart ass teenager,” which fits all of them, but what can you do? It was a different time.

Hey, is it me or is Speedy’s pose on the cover of 4 the same exact pose used in the cover of 11? Like it’s just a straight copy, like you dig?

I enjoyed the Silver Age stories, too (especially the “Aquaman and Arrow trade locales” story). I sorta wish that the Legion of Super-Heroes had thought to nab Speedy and make him feel inadequate as they did with Superboy.

@ralphsix: I do believe you are correct about the pose on the covers of both those issues. I don’t think I even noticed that before so nice observation.

Naturally, I’ve read the GL/GA issues but it’s been a while. As a story goes it’s still remarkable particularly for its time, but it has a pretty big flaw. Why get hooked on smack? Because other jerks call my dad names, or jerks hate me, or my guardian ignores me. And I can’t take advice from you because of war and other bad stuff. That’s some bad 1970s liberal writing. But, the depiction of addiction itself and our reaction to it (though dramatized) is pretty strong. I’m not sure what it says about him or the evolution of comics, but the first time in this month we see Roy with a strong, real personality, he’s strung out. 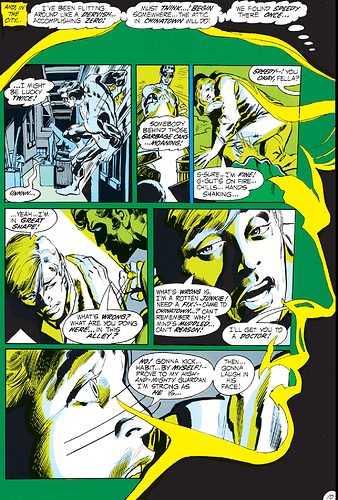 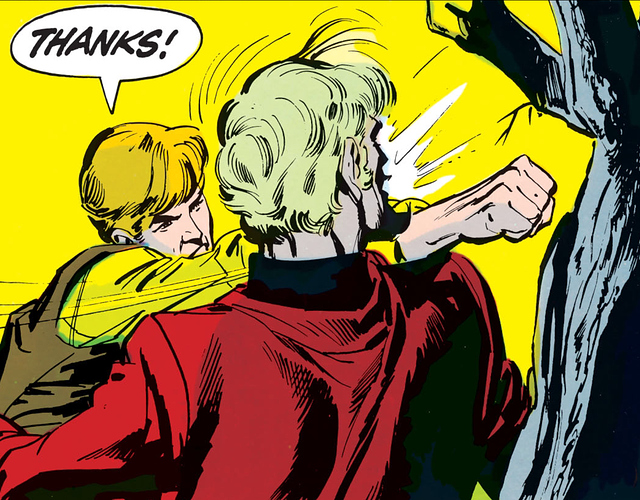 I read The New Teen Titans #20 and there was no Roy! What’s going on? Okay, I’m on the wrong book, my bad.
As for The New Teen Titans #20 (1984) I really enjoyed both issues, cuz everyone has got so many issues. Donna and Terry, Garth is mourning, Wally is trying to figure out how to live up to Barry’s memory, and Jason’s just happy to be there. But the center of the story is 100% Roy and Cheshire and this really works. She’s a mercenary willing to kill for a buck, but her motivations sometimes go deeper. He’s torn between duty and love. Suddenly, carbon copy Roy is the most interesting character on the page. Just goes to show, a good writer can work any character. 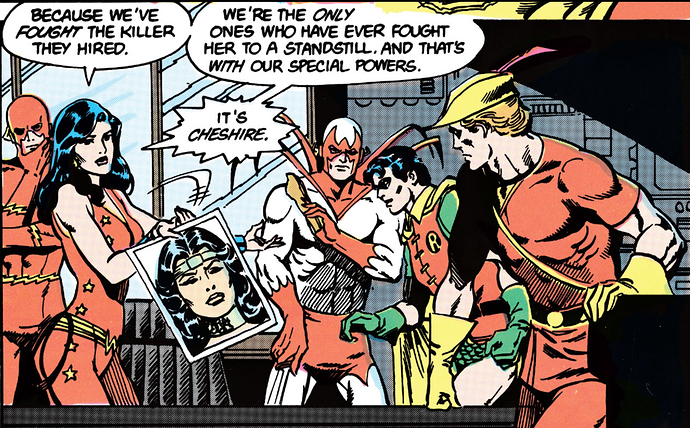 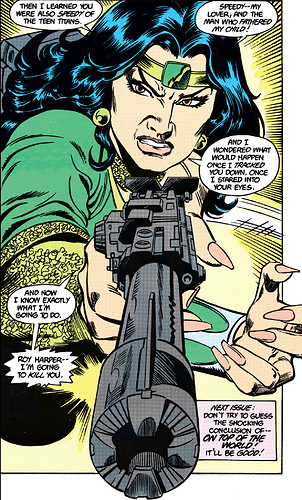 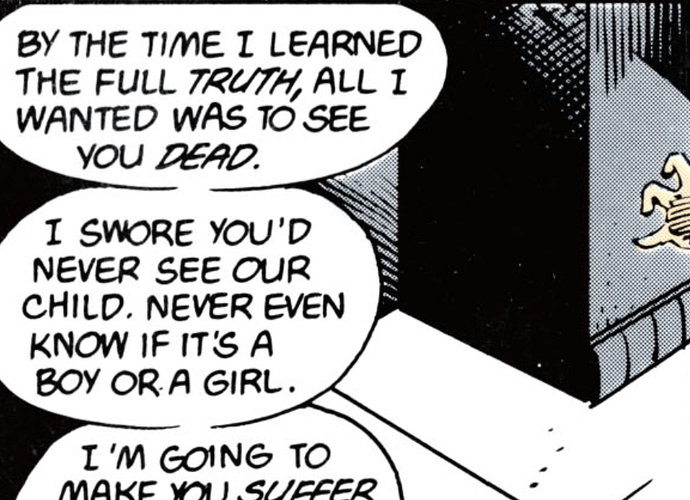 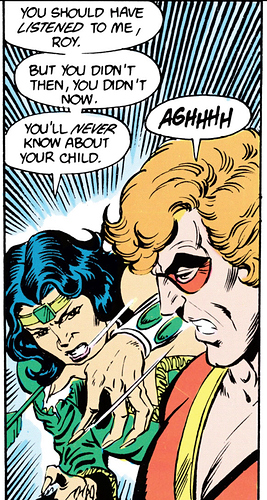 I’d read Titans (1999) up to issue 25 earlier last year, so I was familiar with this two-parter. But, I didn’t love it because everyone is acting like their 12 years-old. Roy, is the only one that vaguely seems his age. He is acting a little like a jerk, but I don’t think he honestly understands how his constant ‘joking’ ceases to be a joke after a while. I had stopped Titans with issue 25 so I hadn’t read 27. This issue I really enjoyed. I like the idea that Cheshire isn’t just Roy’s baby mamma but despite everything she’s done he really cares for her. Can’t explain love. What they’re gonna do to Lian is just… 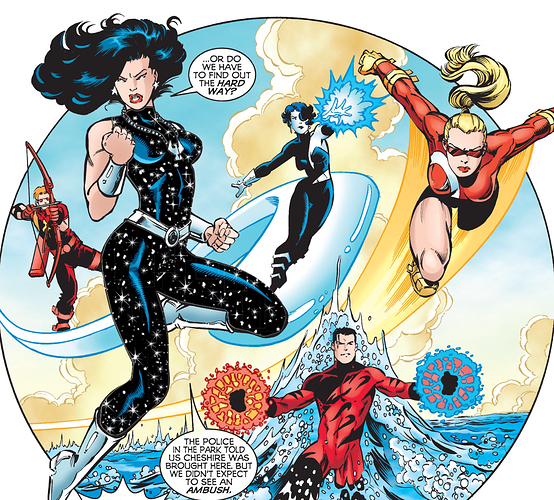 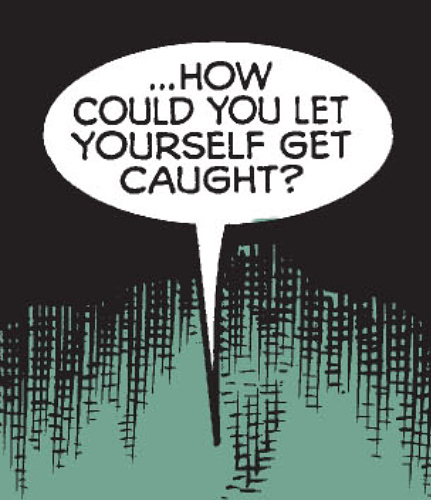 A tad off topic, but how often do we get to see the Robin costume without the red tunic? 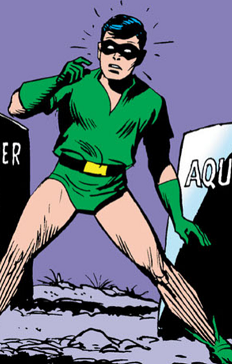 That two parter is one of my favorites because of the struggle between duty and love that Roy’s dealing with here. I also like it because we see how complex of a character Cheshire really is.

Also I agree with you that Terry is a jerk. I never liked him.