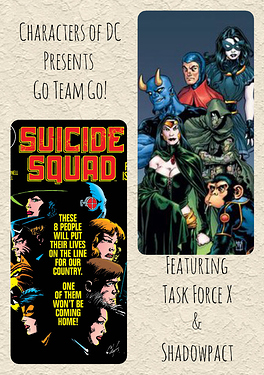 Hello all and welcome to a special anniversary edition of Characters of DC! One year ago this club had just begun. I’m looking forward to Year Two!

And now on with this month’s discussion.

DC has had a lot of great teams over the years. From the JSA to Task Force X and beyond these teams scattered across the DCU have been involved in many events over the years and have become staples within the DCU. This month we will be taking a look at two of these teams and learn how and why they formed, who their members are and which team you would join if you could.

As always I will be making posts during the month with stories to read and other nifty information to discuss.

Join Characters of DC to explore DC’s vast collection of characters from across the multiverse!

Task Force X (nicknamed The Suicide Squad) is the brainchild of Amanda Waller. They are a group of criminals and Super villains who take on very high-risk covert operations in exchange for commuted prison sentences. They are the ones who get called in when a situation requires more extreme measures that the regular heroes will not take.

There have been several members of Task Force X over the years so rather than list them here’s a link.

Members of the Suicide Squad

Issues for these two weeks.

You can also read any other Suicide Squad book you want the above doesn’t appeal to you.

In two weeks we will take a look at Shadowpact. Hope to see you then.

Awesome topic @JasonTodd428. Looking for more about the history of the Squad? Check out our previous History Club topic month. I’ll be back to talk about my take on these issues, but first I still need to go to your Swamp Thing topic. So many good topics, so little focus by me.

[Suicide_Squad_Vol_1_1] The challenge is to take a shifting roster of little known characters, a concept that largely failed thirty-years early, highly serialized character-driven story-telling built issue-upon-issue, and turn it into a series that last more than 60 issues and a team that would be relevant for years to come. By 1987, the Suicide Squad was little more than an interesting name with a largely forgotten history in DC Comics. But, an influx of talent and ideas from the thriving “In…

Shadowpact is a a team of magically based heroes . The group was founded on the spur of the moment by Enchantress, Detective Chimp and Ragman in order to fight against the Spectre.

Next month we will be taking a bit of a break from characters and instead C of DC will be offering up some Holiday Tales for your reading pleasure. Please be sure to tune in.

Are we still reading Suicide Squad or have we moved on? My notifications got turned off again.

You can still read Suicide Squad if you like. We are also reading about Shadow past as well.