Welcome back to CHARACTER CHRONOLOGY, a feature where I detail the publication history of the obscure characters you demand to know more about In honor of one of our most active posters, Reaganfan78, I’ve decided to dedicate my third edition to the 40th President of the United States of America, Mr. Ronald Wilson Reagan. Believe it or not, President Reagan has been more prolific in his activity through the DC Universe than either of my previous featured characters, so I’m breaking this overview into two installments. Part 1 covers Reagan’s appearances up through 1986, the year he played his two most crucial roles in DC history.

(Please note: I’ve omitted the many, many appearances Ronald Reagan has made in MAD Magazine as a public and political figure. MAD may fall under the DC umbrella, but it exists in a space apart.)

[And remember: if there’s an obscure character you’d like a chronology for, let me know below!]

Coming in Part 2: the aftermath of President Reagan’s actions in LEGENDS, his role in the MILLENNIUM crossover, the remainder of his second term and beyond! 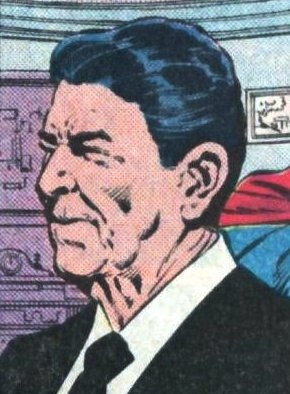 Thankyou HubCityQuestion! I can’t wait to read part 2. I’ve always wanted to know more about any of our Presidents in comics, I know Reagan was in The Dark Knight Returns.