With the premiere of the final season just a couple weeks away, we finally got our first look at the fourth and final season of the CW’s Black Lightning! While it’s definitely exciting to see the show’s return, one detail I noticed while watching is that the trailer doesn’t actually reference the fact that this is the last season, which seems really confusing. Normally, a show that’s gone on for multiple seasons will draw attention to the fact that it’s ending, as finales always tend to generate at least a little more hype than usual and thus draw in more views. But you wouldn’t know that the show’s ending just from watching this, which I just can’t wrap my head around. Black Lightning’s been a pretty underrated show as far as the general Arrowverse is concerned, but it’s also generated a lot of love and deserves to get even more of that during its swan song

Looks fantastic, and even without saying it’s the final season this trailer gives off real “this is the end of the road” vibes. I was really hoping this season would focus on Jefferson training the next generation of heroes (i.e., all of the younger metas introduced last year) and becoming the leader of the Outsiders. That’s still possible, but since the series is ending this year I guess it makes more sense to focus on the Pierce family.

While I do agree w/ that, it’s still baffling to me that that fact isn’t even mentioned specifically. The promotional material for season 8 of Arrow never forgot to mention that it was the last season, but between this trailer and the poster that was released yesterday, there’s still nothing for Black Lightning. It’s just really confusing and frustrating to me that a pretty simple yet important detail is being left out like this 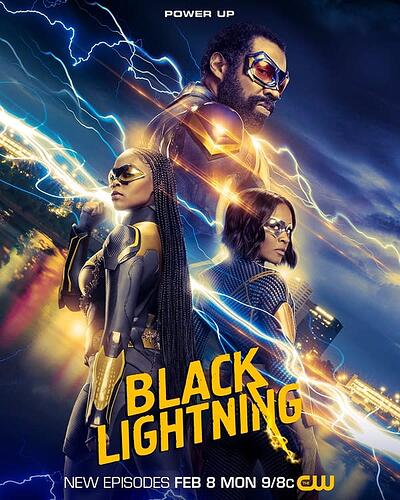 For sure. Maybe they think mentioning that it’s the final season will scare off new viewers who might check it out and become interested enough to watch the Painkiller spin-off. Arrow’s final season was big news because it was the first and longest running of the CW/DC shows, so people were talking about that in entertainment news anyway. Plus, you might be able to bring back some old fans that dropped off by telling them it’s about to end.

Either way, I bet we start to see mentions of it being the final season down the line.

Plus, you might be able to bring back some old fans that dropped off by telling them it’s about to end.

Exactly. I don’t think they’d have anything to lose and a lot to gain by playing up the finality of everything. It’d be different if they just made that announcement last week or something, but it’s been a couple months now, which is plenty of time for the CW’s marketing to integrate that into the promos