I miss Zinda so much! I was really tempted by that Arkham games Oracle figure, but couldn’t quite justify it, and I’m pretty happy with my Heroclix one. Maybe when I buy a house. In like 10 years.

It is Gordon in the back, but the far left figure is actually Black Bat, Cass Cain.

Well, I adore Batwing a lot. But probably not as much as I love Cass.

Yes much love for Wing but Cass is my girl.

All the love! (though as you can tell from my profile pic, my girl is Steph!)

Hey everybody! Got another DCSHG WAL!

Hello, fellow kids! Welcome to yet another glorious Monday, known the world over as Harley Monday! We are nearing the end of this amazingly funny, zany, hilarious, and wonderful series (a second season is upon us, do not despair!

) Ready your bats and grab the nearest tummy-filling snack and/or tasty beverage as we zoom on!

Thanx for the figures! We’re gonna get that BOP collector thread up very soon! I hope you all add to it!

You’re welcome ty. I’ll have to think of all the BOP. I know Ivy & Katana were in & I’ve got a good amount of those. I’ll have to check all the lineups, & than locate the figures. Hopefully get more b4 than. Gotta do some shelf space arrangements. Putting it off cuz idk where to start lol.

@BirdsofPrey Alert! Please join us for another night of merriment and friendship!

As we are continuing to wind down this epic season of one of the greatest shows known to humankind, won’t you join us, please?

I’m curious to see what you guys think of this.

So DC announced back on Thursday that they’re creating a new Batman: Secret Files series, with each issue being a 40-page one-shot highlighting a member of the Batman family.

The first one in June will be focused on Duke Thomas/The Signal as he comes back from his sabbatical from Gotham. But what’s more pertaining to this club is the July issue focused on The Huntress, which not only has an insane team of Mariko Tanaki and David Lapham (!!!), Helena is also gaining…a super power?

On Tuesday July 27, Detective Comics and Eisner Award-winning writer Mariko Tamaki teams up with acclaimed Stray Bullets writer/artist David Lapham for a new tale featuring Gotham City’s Violet Vengeance! Huntress has been through a LOT lately…including her brain being invaded by a violent parasite bent on sending her on a deadly slugfest. If that wasn’t enough, now she has to deal with enhanced abilities too, thanks to a villain by the name of Vile. This parasite has given her the ability to see through the eyes of his victims and this is not her idea of a good time! Huntress isn’t one to be played with, and she’s on the hunt for Vile, with a crossbow bolt with his name on it!

It sounds like something that could be wrapped up and reversed at the end of this story, but it could also be something that sticks around. What would you guys think of Helena having a super power like this? 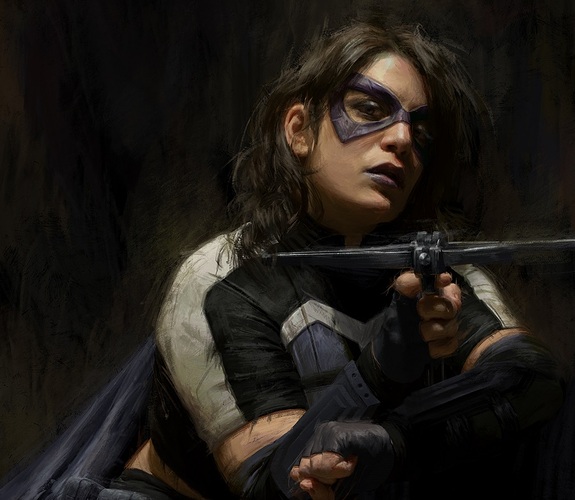 I’m not sure about a super powered Huntress, honestly. But I’m eager to check out it out. I’m sure we’ll cover this storyline once it drops here!

I don’t like her having a super power, but it sounds like it could be temporary, which could be okay.

I dont know how I feel about this. I’ll certainly give it shot, of course.

Hey @BirdsofPrey! Got some brand new reading for ya—continuing our spotlight on

Huntress! [image] Huntress: Cry for Blood 1-6 Helena Bertinelli (aka “Huntress”), known as a figure of vengeance, teams up w/ The Question to discover the secrets of her past in order to prove her innocence after she becomes the prime suspect in a brutal gangland murder. We’ll take the first week (4/19-4/25) to read, then discuss during the second week (4/26-5/2).…

DC History Club: Huntress Topic for June 2020, with Polls Quiz Wiki & Discussions Post 01 2020 June Huntress Intro [1613589907812] The members of the DC History Club have voted for Huntress as the topic for June There are two versions of the Huntress. Helena Wayne is the daughter of the original Golden Age Earth 2 Batman and Catwoman. Helena Bertinelli is a Mafia princess whose family was murdered, leaving her the sole survivor when she was a young child. She vowed vengence Each week …

Cry For Blood is one of my favorite evers. So good!!!

I’m down with it. Reminds me of an issue I just read in The Batman Chronicles. Blind guy had a power where if he touched u or u touched him. He could see everything u were seeing thru your eyes. I thought it was a cool idea & a cool power?

Oh, that was Legends of the Dark Knight, which we actually covered over at WOB a couple of months ago. Pretty good stories, written by Dwayne McDuffie.

Hello and welcome to the latest iteration of the World of Bats, the Batman Book Club! This week, I thought we’d honor an industry great, especially relevant given the day. Today, February 20th is the birthday of Dwayne McDuffie, who has created a lot of characters and concepts for both DC and Marvel, from Damage Control to the Milestone Universe. He was also one of the chief architects of the Justice League and Justice League Unlimited animated series. And on the day tomorrow, ten years ago, Dw…

That’s right. I remember being super excited when I saw his name at the beginning. Yeah, that was a quality read for sure. Went thru the whole roller coaster of emotions.