Hey everybody! I was thinking today about all the great supervillains in the DC universe. Obviously the best ones are the ones with compelling origins. The ones you actually can see where they started and then ended up in a fleshed out manner are usually the ones you want to read. That said, who do y’all think has the most compelling origin? My vote goes to Mr. Freeze. His wife’s illness, the desire to find a cure, and him eventually being turned into a cold, dark person essentially cut off from the world in his suit of ice all make him interesting to read or even watch in the animated series. What do you think?

Freeze definitely has one of the best.

The mystery of the Jokers origin is great.

Sinestro’s is very good as well- the drive to do terrible things because he believes his cause is just.

With few exceptions, Villains without a backstory.
Darkseid has a very Shakespearean back story, but you don’t need to know his backstory, it’s interesting, but it doesn’t make or break him.

The Joker is best without an story except for got dumped into a vat of chemicals. He emerges fully formed. Alan Moore was full of

, when he wrote his origin in Killing Joke. That origin story takes away depth from Joker as a villain, it does not add to the character.

One of the examples, and the best example of a villain origin story is Sinestro. It is such a long, slow burn. It builds up layer by layer. It adds to the character because yo can see how his psychology morphs as he becomes more and more jaded about the guardians, and rightfully so. He was completely justified and correct in killing them.

It was from an episode of the recent Duck Tales reboot

Earlier in the series it was established that Darkwing Duck was an old tv show from the 80s in the new Duck Tales universe. The title character was played by a duck named Jim Starling

Well in one episode it was revealed that they were making a Darkwing Duck movie and cast a new young actor named Drake Mallard in the role.

Well Jim Sterling is angry because not only is he not cast in the role but they’re making Darkwing much more gritty and grounded in realism as opposed to the old campy tv show (a reference to the Nolan Dark Knight movies) so he tries to sabatoge the movie and kill Drake Mallard.

This causes Drake to adopt the Darkwing Duck persona in the real world and become a real superhero rather than a tv character.

Scarecrow and Magneto have two of the most heartbreaking origin stories to me. Mr. Freeze is super relatable.

BLACK ADAM! to me has one of the best origin stories and can go toe to toe with Superman and Win 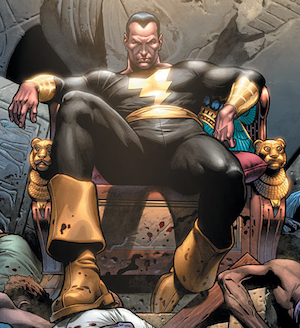 AND win! That’s a bold statement.

Superman has trouble with magic only saying it would be close

BLACK ADAM! to me has one of the best origin stories and can go toe to toe with Superman and Win

I have to agree with you. I think Mr. Freeze has the best origin. What makes it so great is that one can actually sympathize with Freeze to a degree. I can see how the tragedy of his wife’s illness could turn him into something else. I also have to say I always liked Two-Face’s origin as well. The very idea that he was originally an upstanding DA adds a dimension to him some other villains lack.

I’m fond of Solomon Grundy’s origin story. It’s like something out of a horror movie or urban legend.

One of the examples, and the best example of a villain origin story is Sinestro. It is such a long, slow burn. It builds up layer by layer. It adds to the character because yo can see how his psychology morphs as he becomes more and more jaded about the guardians, and rightfully so.

Well said. Even right down to how he acquired the yellow element and founded the Sinestro Corps. The universe’s most feared army.

Yes! Me too. That Lawful Evil mentality just makes for such great villains and leaders. Ra’s al Ghul is another great villain along that same line.

John Byrne and Marv Wolfman’s Lex Luthor. He’s the top dog in Metropolis. He practically owns the city. Almost all the inhabitants “work” for him. And then this gaudily clad “showboat” makes the scene and grabs all the adulation that should be his. His reaction to Superman, and subsequent hatred, is all too human. Simple and eloquent in form and design. Byrne and Wolfman are master storytellers.

The villains in an old silver-age Supergirl story. They were the last of a race of evil scientists. Gee, I wonder why that society fell apart.

Sure, but what was wrong with, “I’m going to use my genius to protect my best friend. Uh-oh, I messed up. Good thing my best friend saved me. But oh no, my hair fell out! I’m going to turn evil now and try to kill him for the next few decades?”

I really like Bane’s backstory, you know the whole born in the darkness thing