Best Robin and why

This post isn’t to discuss who’s the best fighter, most skilled, etc… rather who is your personal favorite of the Four (main) Robins.

Mine is without a doubt Tim Drake. He’s not only my favorite Robin but one of my favorite DC characters of all time. In my opinion he’s the most relatable, he may not be the best fighter of the robins but he’s by far the most like Batman. His determination, intellect, and sheer will to win as well as his dedication to preparation makes me believe that if the gloves came off and all four faced off, Red Robin would be the last one standing.
Thoughts?

Well, my screen name might give it away, but yeah—Tim Drake all the way. He’s not just my favorite Robin, but my favorite character in all of comics.

Though his mom would be murdered shortly after he was introduced, and his dad would follow the same fate years later, I always thought it was interesting that Tim wanted to join Batman’s cause before he was struck with tragedy.

Perhaps the only Bat family character to pursue being a vigilante purely in the name of justice.

So yeah, Tim Drake all day.

Definitely Tim. He’s shown that he puts other people’s needs before his own, is skilled enough as a strategist to beat Lady Shiva without laying a hit on her, is one of the best detectives in the Batfamily, and is the most relatable of the Robins by far.

My personal favorite? Jason Todd. Of all the Robins, he’s the only one who knows what it’s like to grow up in the real Gotham City. Protecting it is personal to him. Dick’s a traveler, Tim was sheltered, and Damian has delusions of grandeur. Jason had to fight for scraps in Crime Alley. He knows what it’s like to be the people Batman is trying to help, because he was one of them.

He had the best Robin suit and he’s one of two Robins (the other being Jason Todd) whose last name can be used as a Seinfeld reference.

That’s true. I asked Newman what he thought of Damian and then snapped a photo of his reaction. 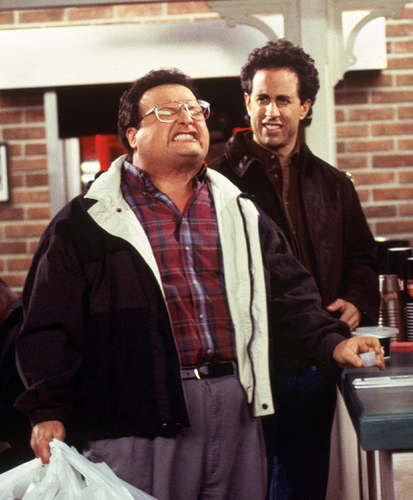