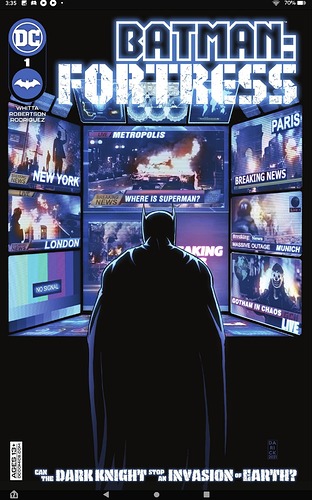 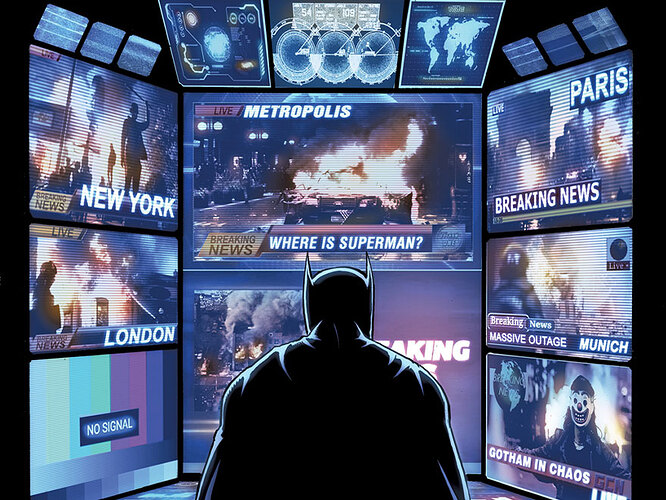 Can the Dark Knight stop an invasion of Earth?

When an unknown alien ship enters Earth’s atmosphere, disrupting global power and communications and plunging the planet into chaos, the world is left wondering…where is Superman when he is needed most? In the mysterious absence of the Last Son of Krypton, Batman must rally the rest of the Justice League to counter the alien threat…but first, he must quell a crime wave on the blacked-out streets of Gotham! Gary Whitta (Rogue One: A Star Wars Story) and Darick Robertson (The Boys) have joined forces to tell a brutal and shocking adventure that will turn everything you think you know about Superman upside down!

When an unknown alien ship enters Earth’s atmosphere, disrupting global power and communications and plunging the planet into chaos, the world is left wondering…where is Superman when he is needed most? In the mysterious absence of the Last Son of...

The first of this eight-issue series was released today and I have been looking forward to this one since I heard about it.

We start with the world going dark and learn a constantly generated ‘A cross-spectrum energy wave’ is knocking most communication and major energy transmission out…we also learn superman has a unique energy signature. i think the same thing that’s knocking out communications might be blocking clarks powers. this is also set some time after Jason’s death but before Alfred

I think that Bruce avoids patroling in crime alley and the east end is a nice touch and explains why he seemed to calm down. however, I love that he has a bust of his mother with her pearls on it.

I couldn’t shake the feeling that this was so similar to One Dark Night by Jock. I know there’s 7 more issues, and it’ll turn into a very different story, but it was just so deja vu reading it.

Same. The whole blackout thing could have easily been dropped to focus entirely on the invading alien force.

I like the story and I’m excited for the second issue.
Best line
He’ll fly halfway around the world to rescue a cat stuck in a tree, but he doesn’t show up for this?

Same. The whole blackout thing could have easily been dropped to focus entirely on the invading alien force.

Well yes, it is similar to Jock’s work, in that it’s a blackout, however, it’s different enough to be interesting. the focus on this was to show just how this Batman operates. He is picking his target Ignoring the rioters and instead of going after the rouges who are more of a danger than the others. Penguin who was drowning a woman, and Joker who had a school bus full of kids.

I’m not saying it’s bad, I’m just saying that it was a very odd choice by editorial to release these books so close to each other (relatively). But I’ve been complaining about market cannibalization for years now.

So I’m on #4 and so far I gotta say that this mini series is not bad, its a decent read with some unique creative choices and classic DC character designs. It gives me the impression of those 90s Elseworld stories.

It’s definitely a Batman book because these aliens are so OP to be able to take on the Justice league(who fought alien invasions before) but somehow Bruce is still alive and doing the leg work here. 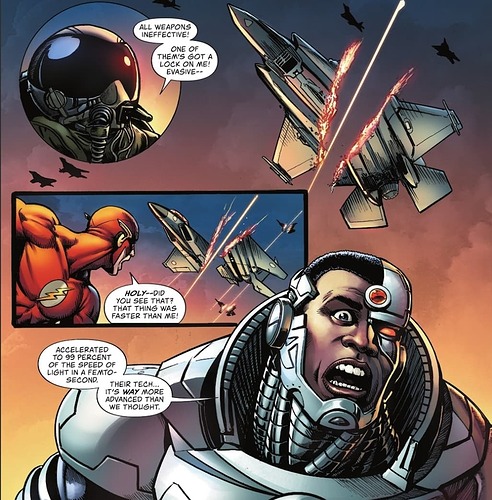 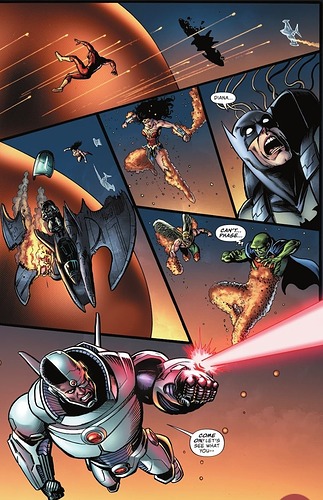 I’m expecting to a degree a reveal about the nature of Superman and or Kypton, similar to that twist from the Superman: Earth one book involving Kyptonians and those aliens 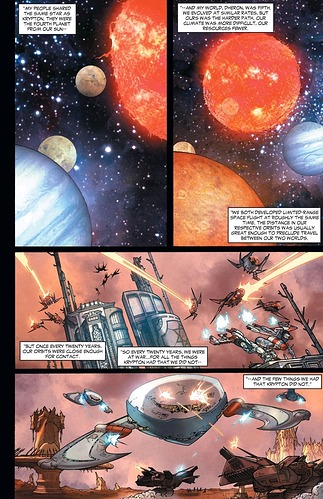 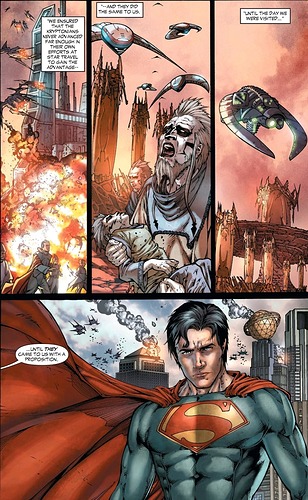 So what I’m saying besides the surprising death of one Superman supporting character, I don’t really expect the twist to surprise me so much. I don’t love this or even like it, I’m just fascinated by it to continue reading.

Well, the aliens are using Hybrid Kryptonian technology. so perhaps it gets better under a yellow sun.