WellI thought i actually made a disscusion form for this but we have a two batman beyond series this one taking us back to the original DCAU batman Beyond.
Gotham City is now alive, and its first action was to kill Bruce Wayne.

so what do you think about issues one and 2? I like that we are seeing terry on his own, however, I am wondering if we will learn the fate of some of our beloved heroes…and villains in the DCAU. I am hoping we will finally learn the fate of Catwoman/Selina Kyle of this universe. Does she learn her Bat is really Bruce Wayne? Does she go before Bruce does like on earth-two?..did they have a kid together?
because 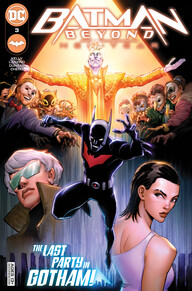 the dark-haired woman opposed Babs on the cover looks like she could be the bat and the cat’s daughter.