ASK...THE QUESTION: Where Did Martha Wayne's Falling Pearls Come From? 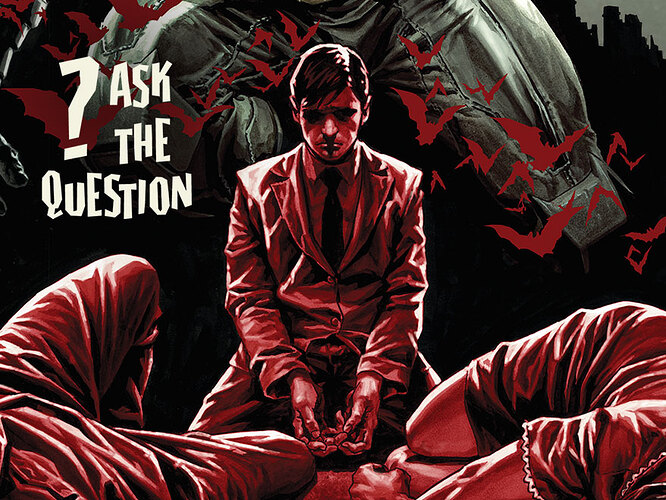 Hello, once again! Alex Jaffe here, better known in the DC Community as HubCityQuestion. My personal mission: to take on any question you have about the DC Universe—no matter how strange, granular, or obscure—and satisfy your curiosity. As a faithful steward of the truth, I offer my time in this monthly column to address these inquiries. If you’d like to submit one of your own, you can stop by my office at any time in the DC Community to make your inquiries, which I’ll address to the best of my ability. Let’s get some answers!

In most recent versions of the Waynes’ murder, Martha’s pearl necklace features heavily. The necklace breaks, the pearls go everywhere. When did that visual motif start?

We’ve been watching the Waynes get murdered in Crime Alley since 1939, but the iconic imagery of the scattering pearls was born in 1986 as part of Frank Miller’s The Dark Knight Returns and expounded upon further in his Batman: Year One the following year.

To see the full list of questions and their spectacular answers, head over to DC Comics!

Want to ask a question? Head over to the dedicated request thread!

I saw the question and immediately thought, “Dark Knight Returns.” Granted, she did wear a necklace as far back as her first appearance in Detective Comics #33: 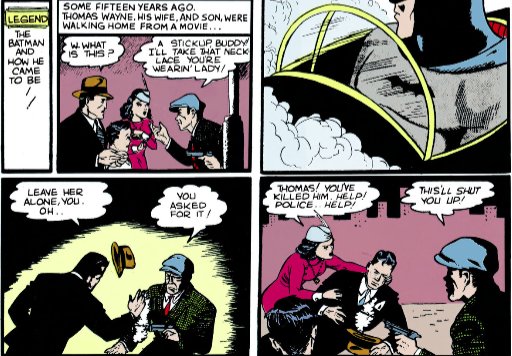 And she is missing the necklace once Martha is dead, presumably indicating that Joe Chill stole it from her after killing the Waynes: 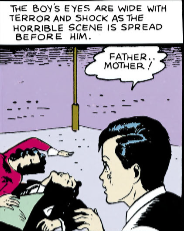 So Frank Miller isn’t pulling his imagery from nowhere. However, it doesn’t seem to be a pearl necklace in Bob Kane’s original 1939 panels. (Granted, Bob wasn’t the greatest artist that DC has ever seen, either, but still…) And the necklace certainly never flies apart dramatically.

Side note: it was a pearl necklace in the 1985 Super Powers Team show, which contained the first on-screen depiction of the Wayne murders. My top biographer is the answer again.

I’m happy to see what you were investigating with Dial H for Hero. That is a LOT of community contributors who went on to get jobs in comics!
Zeep the Living Sponge is one of my favorite names in comics and I appreciate anytime I see him in print.
I also hope your column helps get Hero Hotline (1989) closer to getting added to the digital library, especially with One Star Squadron (2022) coming out right now.