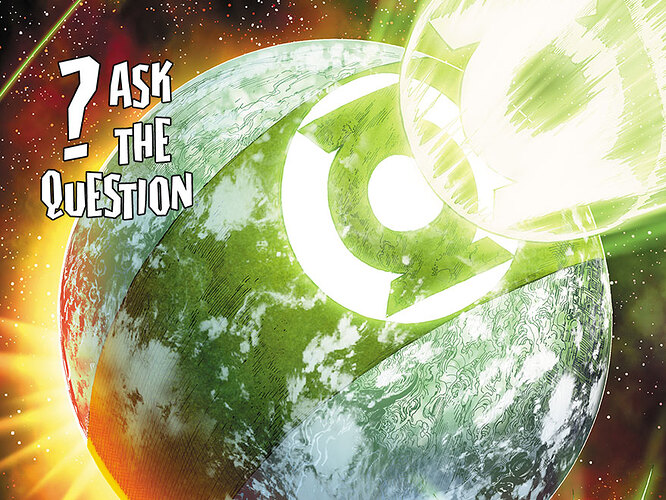 Hello. I’m Alex Jaffe, better known in the DC Community as HubCityQuestion. My personal mission: to take on any question you have about the DC Universe—no matter how strange, granular, or obscure—and satisfy your curiosity. As a faithful steward of the truth, I offer my time in this monthly column to address these inquiries. If you’d like to submit a question of your own, you can stop by my virtual office over in the DC Community at any time to state your case. I’ll do my best to address them all to the best of my ability.

Let’s get some answers!

I’ve got a question I’ve been wondering about for a while—has Mogo ever used constructs in combat? It’s possible he has, and I am just totally forgetting, but I feel like all I’ve seen him use is just pure energy attacks. I do remember him creating constructs to help other Lanterns (like with recreating Kilowog’s family). I was just wondering, especially since it seems like he would have some very interesting ones, since he’s a planet after all.

As a living planet, Mogo is a unique entity amongst the Green Lantern Corps. As such, so too is Mogo’s relationship to its ring unique. When called to battle or to protect itself, Mogo is known at times to emit bright green light, blast powerful rays of force and construct defensive walls, as all Green Lanterns can, albeit on a much larger scale. But as more creative constructs go, Mogo’s go-to move is creating likenesses of other people—like in the Kilowog example you mentioned. The first construct we see Mogo build was in 1990’s Mister Miracle #14, a tentacle-headed representative of sorts constructed to represent Mogo’s interests speaks with humanoid visitors on their level. This ability is expanded upon beginning in 2005’s Green Lantern Corps: Recharge, where Mogo demonstrates the ability to conjure the image of significant figures from one’s past to inspire the Corps and bolster their will. Twice, this ability is corrupted: first, in 2007’s Green Lantern Corps #10, when Despotellis infects Mogo to turn the Corps against itself, and later, in 2011’s War of the Green Lanterns, when a Krona-controlled Mogo uses that same ability to distract the Green Lanterns in the midst of battle. 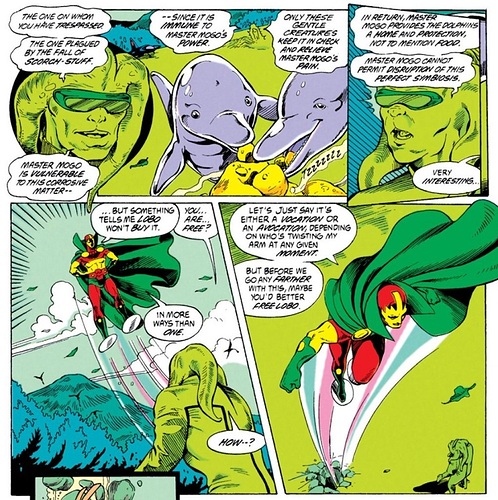 But Mogo’s most frequent use of its Green Lantern ring isn’t hard light constructs, as with other Lanterns, but the ability it grants the planet to completely control itself. With the power of the ring, Mogo is able to shift its land masses, control all the native life on its surface, move about the universe, and most formidably, increase its gravitational pull so that no enemy can escape its grasp. Whether these powers were something Mogo could do innately or relied upon the ring to facilitate was a matter of scholarly debate for some time, but was settled in the 2015 Green Lantern: Godhead story, as Mogo became dormant once Highfather had taken its ring.

And while Mogo doesn’t use its ring in the traditional sense, it’s important to remember that every Green Lantern ring shares a special connection with Mogo. More than just a secret weapon or backup base of operations, Mogo’s greatest duty to the corps is its guidance of every ring in the universe upon the death of its owner to find a new bearer worthy of its power. Those rings don’t just fly themselves.

To read the rest of the questions for this month, head over to DC Comics!

Want to submit your own question? Be sure to head over to the official request thread to ask!