I’ll take a stab here. Core plus whatever characters you’re already reading. Some titles only really contributed by having the red skies, plus some of them are a lot harder to place in continuity.

CBR did an article on The Answer today: 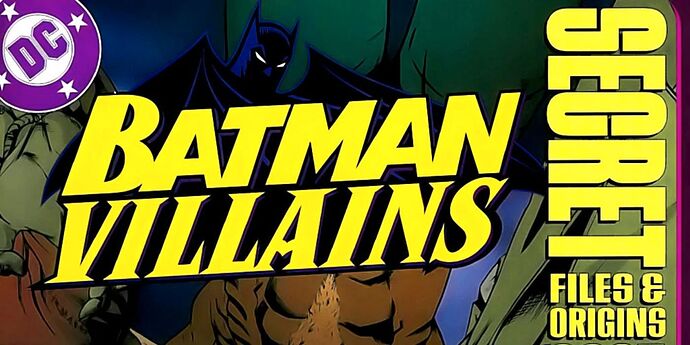 Why Has a Batman Villain Introduced 25 Years Ago Still Never Appeared in a DC...

Batman's most obscure villain never appeared in an actual story, and he's since been forgotten, failing to ever truly face the Dark Knight.

I’m glad that somebody besides me remembers him. I’m mildly obsessed with this character and I hope that DC someday publishes Alan Grant’s story about him that is surely sitting and gathering dust in some filing cabinet somewhere.

Couldn’t agree with you more on this one, “Kookie.” If Batman won’t shake loose of the Riddler, I think we’d all like to see some version of “Q” face off against Grant’s aforementioned Answer. Even if it’s a one-shot only special. I’m sure up for it!

What race of aliens are the aliens in Camelot 3000?

I am starting to get confused about the DC Multi-verse set-up, and all the reading seems a little dated. Earth Prime seems to several distinctions, but now seems to be the Arrowverse TV Universe??? And what is the difference between Earth 0 and 1 ??? And Earth 2 seems to be all over the place (the Earth 2 I loved was the New 52 Earth 2 with the World’s End storyline…) The rest I understand…but “Prime”,0,1,and 2 seem to be changing all the time…

Not sure DC cares anymore

Do we ever see them again?

I am starting to get confused about the DC Multi-verse set-up, and all the reading seems a little dated. Earth Prime seems to several distinctions, but now seems to be the Arrowverse TV Universe??? And what is the difference between Earth 0 and 1 ??? And Earth 2 seems to be all over the place (the Earth 2 I loved was the New 52 Earth 2 with the World’s End storyline…) The rest I understand…but “Prime”,0,1,and 2 seem to be changing all the time…

In 1961, a story called “Flash of Two Worlds” in The Flash #123 set up the designations of Earth 1 and Earth 2. Earth 1 was where the then-modern DC stories were said to take place, with the “Golden Age” stories of heroes like Jay Garrick and Alan Scott taking place on Earth 2.

From there, an entire multiverse grew. One of the Earths introduced was “Earth Prime,” which was meant to be our own reality, where superheroes were fictional characters in comic books.

This was all until Crisis on Infinite Earths in 1985. The entire multiverse was (allegedly) destroyed, and all of reality as it was known in the comics was condensed into a single “New Earth.”

In 2007, it was revealed in the series 52 (not to be confused with The New 52, which came later) that the multiverse wasn’t destroyed after all, but reformed. “New Earth” was designated “Earth 0.” Earth 2, the home of the original Golden Age superheroes, were still out there. But Earth 1 was now the home of new updated versions of heroes such as those seen in the line of “Earth One” graphic novels.

In 2011, the “Flashpoint” event reset the multiverse again. This time, “Earth 0” was synonymous with “Prime Earth.” The “Earth 2” you read about in the New 52 was born, itself updating the classic Earth 2 stable of Golden Age heroes. And as the “Earth One” graphic novels were still being published, that remained Earth 1.

The multiverse as we see in The Flash and other Arrowverse shows, meanwhile, is treated as an entirely separate entity than the multiverse from the comics, and those Earth designations aren’t designed to be compatible with those we see in the books.

Why is it that the Emotional Spectrum doesn’t account for happiness or sadness - two of the most basic emotions?

Except in the current comics they have books unfortunately labeled Earth-Prime for books relating to characters from the tv shows (Batwoman, Superman & Lois, Flash) ??? At least that is the way it looks…?

Yes, that is a special one-off series that has no connection to the regular DC books. The CW’s New Earth was designated “Earth-Prime” at the end of their Crisis on Infinite Earths. Also, the “Earth-Prime Stargirl” issue doesn’t actually take place on Earth-Prime, since that show actually takes place on the new Earth-2 that came out of Crisis which more closely resembles comics Earth-2.

About a month ago, I asked for an update on Plastic Man, which you were nice enough to provide. Since then, a YouTube piece on him and Mr. Fantastic, caught my attention. It got my mind looking at something (I imagine) most of us have overlooked before.

Most Marvel fans know that Reed invented the “unstable molecule” for their costumes. That which the FF (and apparently, everybody else over there) uses quite freely. But, ever since his debut with Quality Comics, and right up to present appearances in the DCU, Plas has always had a costume, that does exactly what he does. How, does it do that, exactly?

Hey Q. Yeah, it’s me again. For some reason, I seem to be stuck in a Plastic Man groove, at the moment. Hopefully these will be my last inquiries about the amazing oddity that is “Eel” O’Brian. Considering his past criminal record (although I don’t remember him ever being tried and convicted of anything), how was he able to become an FBI agent? At the very least, you need a squeaky clean background check for that.

And when DC put him back in circulation, his world was always more Angel & the Ape, and Inferior 5 than Justice League, as I remember. So, when did he “officially” merge with the more serious sided heroes of the DCU? I remember a Neal Adams cover for a Brave & the Bold team-up he had with Batman. Was that his first “crossover” with a main stream DC hero? Curious, as always, and thanks for your time!

With all this multiverse business taking up so much oxygen these days, in both the DC and Marvel Universes, I got to wondering about someone. Somebody familiar to both companies, but not in use by either for over 25 years. Last seen (I believe) in Green Lantern #87, vol 3. I refer of course to inter-dimensional ferryman Axel Asher.

Being co-owned by each company, I thought he could be used by both, with no strings attached. Am I wrong about that? Does each company have veto power over the character’s usage? Or is it just that dimensional travel has become so commonplace, that mister Asher’s services are no longer required? As always, just curious.

Surfing the DCU website as I do on occasion, I came across some unpleasant news. The passing of Tim Sale, on June 16th. They say that bad news comes in threes. So, I was always expecting that 3rd shoe to drop, after Neal and George. I wasn’t aware that he was so close in age to Prez. I guess that’s what took me by surprise.

The little I knew of him, showed him to be a fine man and a heck of a visionary talent. His Batman: the Long Halloween and Dark Victory, will always stand out as some of the finest material to come out of his era. My deepest condolences to his family and friends.

Patty Jenkins gave us a live action Max Lord, and her version of the old Monkey’s Paw story, in WW84. I assume said “paw” has appeared in the pages of DC prior to that film. Where and when, please.

This question requires a little bit of splicing, because while the “Dreamstone” as named in Wonder Woman 84 does have comic origins, its function as seen in the film is nothing at all like how it works in the original material. That “Monkey’s Paw” element is a Patty Jenkins invention. Originally, the Dreamstone was the property of Justice League villain Doctor Destiny, as first seen in Justice League of America #19 (1963). Using the Dreamstone, Doctor Destiny had the power to project illusions in the minds of his victims. In Neil Gaiman’s Sandman, the Dreamstone was revealed to actually be an artifact of great power belonging to Dream of the Endless, the spiritual embodiment of and ruler over all dreams.

Why Jenkins chose to use the Dreamstone in Wonder Woman '84 and bestow it with an entirely different function, I couldn’t say. Maybe she just liked the name.