Blue Beetle should have his own show, the Blue Beetle similar to the Young Justice version though. They could make a connection with Booster Gold appearing on DC’s Legends of Tomorrow. The first season could be when he starts off first getting the scarab attached to him, and learning how to control the powers it gives him. The last episode of the first season could be when Booster Gold appears because history would be messed up, and the old Blue Beetle dies I think too soon, so then the first two episodes of the second season could be them and other Blue Beetle’s throughout time trying to fix it, then the show would get the connection to the Arrowverse and the show would continue as normal. He could probably have a crossover between one of the heroes, but not really appear that much because he is a young hero and all. 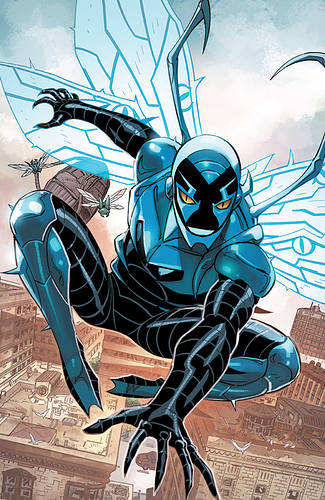 Ted Kord or Kord Industries it seems has been refferenced quite a few times. Could have a Blue Beetle series with Jaime and Ted as a mentor figure sort of the direction the comics went. He could be the founding member of “Team Beetle”.

Could be cool, that would have to be alot of cgi though.

Way more than Supergirl and Flash already have.