Armageddon: All You Need to Know Before Tonight's Flash Premiere (Spoilers!) 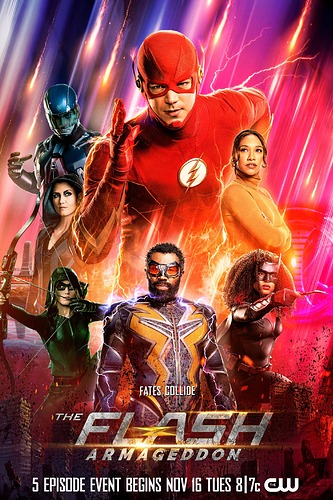 The Flash returns tonight for a thrilling eighth season, but this time our favorite speedster won’t be starting the season off alone. Tonight’s premiere is the first installment of a blockbuster five-part event called “Armageddon” which will unite Barry Allen with some of the greatest heroes of DCTV. If it wasn’t clear, we’re living in the Golden Age of Superhero Television, which is great, but it also means that it’s really easy to fall behind. Plus, while there are plenty of Arrowverse fans who watch all of the shows set in its shared universe, there are just as many who don’t. As a result, whenever these big events happen, we always hear from fans wondering if you need to get caught up on everything before you dive in.

First, the answer to that is always yes! At least, if you’re able to. All of the Arrowverse shows are awesome in their own way, and they’re all available for binging, either on HBO Max or on Netflix.

However, we do realize that people have lives and responsibilities, and that for most of you, dropping everything to binge seven seasons of DC’s Legends of Tomorrow is probably just not going to happen. Also, “Armageddon,” just like all of these big events, is designed more or less to be a standalone adventure. You’d be fine going in fresh. However, we propose a third option—a middle ground, if you will. We can catch you up! This feature will bring you up to speed on what’s been happening in the Arrowverse ahead of tonight’s Flash premiere. So, without further ado, here’s everything you need to know before watching “Armageddon.”

If You Haven’t Caught Up on The Flash

If you’ve been away from The Flash for a few years and decided to return to watch this crossover event, welcome back! You might notice a few new faces at S.T.A.R. Labs, and maybe you’re curious about some missing ones. For starters, Cisco Ramon has moved on. He was offered a leadership role at A.R.G.U.S. and we couldn’t be prouder. Cisco’s replacement is a scientist named Chester Runk, and once you meet Chester, you’ll understand why. He’s basically an enthusiastic nerd, much like Cisco was in the early seasons.

And no, you’re not seeing double, last season Caitlin Snow and Frost (who dropped the Killer from her name) found themselves in separate bodies. The arrangement took some getting used to, but Team Flash is used to dealing with doppelgangers by now. Speaking of doppelgangers, Harrison Wells is no longer in the picture. Last season all the Wells across the multiverse sacrificed themselves to help restore Barry’s powers. This process resurrected the original Harrison Wells, but he chose to go his own way.

To get fully caught up ahead of the Season Premiere for The Flash, head over to DC Comics!

Are you excited for a new season of The Flash? Let us know in the comments!

Are you excited for a new season of The Flash? Let us know in the comments!

As you command- no, but I hope the viewers love it.