Are the Batman Missions still being released?

They’re my favorite to collect this past year, i was wondering if they’re still coming out with new ones, cause i have most of them.

Arctic Armor Batman has been available at Amazon for a couple weeks, while he and Mr. Freeze are both showing up at Target.

-Thrasher Suit Batman
-Man-Bat
-Scarecrow
-Nightwing
-Classic Batman (due out soon)
-Rebirth Batwing (due out soon)
-12" Battle Armor Batman (not the exact title, which escapes me at the moment, but Batman is in his blue and gray suit and features battle armor accessories and sound effects)

-Batman vs. The Joker box set. Comes with 6" Batman and Joker action figures (first 6" figures in the line of Batman in his blue and grey uni and of Joker in a suit) and a Joker themed helicopter.
-Batcycle, which comes with a Batman figure.

We’ll see if any new stuff debuts at SDCC. I would hope at least a few more 6" basic figures come along.

Awesome! Yea i love the 6 inch figures, and i have the freeze and arctic batman. Is the man bat 6 or 12? I dont have that one, im also missing harley and riddler.

And when did that box set release? I haven’t seen it.

Man-Bat is in the 12" scale. It’s a repaint of the figure that came in a two-pack with the Stealth Suit Batman.

As for that box set, walmart.com had it a few weeks ago while Amazon has it available to order, but not in stock for one to three months. Here’s a picture from Amazon: 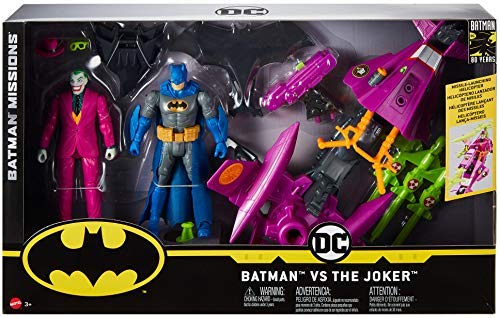 …and a loose (opened) look at the Batman vs. Joker set and what it comes with. 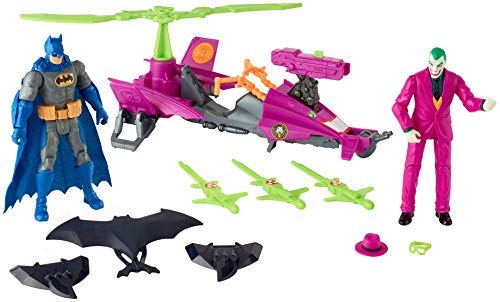 I found freeze at kroger signature store lol and i found arctic at walgreens.

Wanna see a pic of all mine?

I found Batgirl months ago at a Kroger store too. Goooo Kroger!

Do you know any other stores that carry them besides target, kroger, walgreens? Walmart never carries them i dont know why.

I really hope they make a jim gordon version or a alfred.

Amazon carries Batman Missions too. They currently have items I’ve not seen elsewhere such as:

A 12" scale Batcycle with an included Batman figure is listed, but is out of stock ATM.

Walmart briefly carried the 6" figures for a while, and had a good amount of pegspace alloted for them, but they rarely had anything in substantial quantities.

Their next reset came along and the space for Batman Missions went to something else, something not DC.

Lastly, you’ve a nice setup. Are those carded doubles or do you keep them carded to begin with?

I honestly dont mean what carded means, they’ve never been opened. I have bought doubles and took them out on display.

Carded=in the package, still on the card. Boxed is the term meaning the same thing for action figures sold in box style packaging.

Loose=opened, as in loose from the package.

Your figures are carded

@vroom let me know please. I don’t wanna miss out on in store buys.

Batman Missions product has never had a specific on-shelf street date (select movie based waves of DC Multiverse in the past have), so it’s really a “They show up when they show up.” way of doing things.

Online is typically the best way to buy collector based lines more and more, but if you’re averse to that method, then the best advice for physical finds is to check your stores on a reasonably frequent basis and hope they’ve ordered what you want and that your timing is good enough to result in finding what you want.

Ahhh ok thanks dude. And i got freeze already. I need the riddler and harley. And theres a killing joke joker i want so bad.

I know you’ve got Freeze, but my mention of him was for anyone reading who doesn’t have him

The Killing Joke style Joker hasn’t been found at any physical stores from reports I’ve read, nor has the deluxe Batman that is in the same series with him. Amazon is the only place I’ve seen them at.