Backstory: Across the vast reaches space and possibility lies many mysterious worlds and planets. One of which being an Earth identical to the one we know save for the fact that everyone is mysteriously a robot!

Every single individual on this world is a robot fashioned from plastic with physical abilities beyond the common man. Somehow aware of the world of flesh and blood, they would seek to replicate it.

The Robot Wonder Woman of this world noticing that they did not possess a Steve Trevor on their planet, would attempt to kidnap the real one. Driven by the need to make their world exactly the same.

However as Diana is busily rescuing Steve from this world, she would discover that Robot Wonder Woman and her Earth differed quite heavily from the Earth she was familiar with.

The most blatant was that for a world where any injury one may suffer no matter how grievous could be instantly repaired, life held little value. Thus little hesitation existed for something as final as murder for a people for whom such an act was only temporary.

Secondly, these robots never held any worship of the gods. Thus any of the restrictions which dictated the Amazons actions did not apply to them. So the world knew of Robot Wonder Woman and her people. The Amazons freely came and went from their island. Men would come and even stay on the island. And all of their contests and events were heavily commercialized with people from across the world coming to attend.

Most importantly from Dianas perspective, this Robot Wonder Woman lacked any sense of compassion or empathy. Garnering glee at the chance to slaughter those who opposed her and take whatever she wanted consequences be darned. 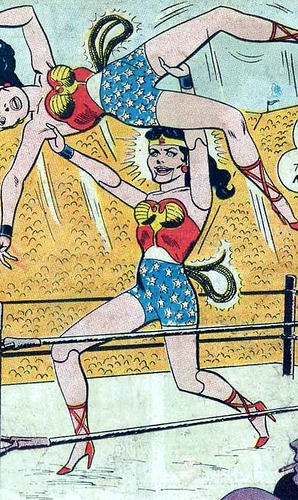 Kanighers era on Wonder Woman had quite a large number of evil dopplegangers of Wonder Woman. From evil alternates from parallel worlds, to duplicates created by villains in order to replicate Wonder Womans abilities.

Backstory: In a solar system where every world is populated in some manner or another, Jupiter was no exception. Secretly beneath the dense weather patterns which blanketed the worlds atmosphere was a massive planet where all life was scaled to size, with the bipedal humanoid populace all being one hundred feet tall.

These people known as the ‘Jovians’ possessed massive spacecraft and could travel the stars, but otherwise lived in a society that was somewhere between ancient Rome and the medevil period in terms of technology and culture. A world which was credited for being the homeland of Paul Bunyan, an alien who as a baby had been jettisoned from his planet to be found on Earth to be raised by lumberjacks.

The most startling figure on this world of Jupiter without a doubt however was none other than their own Jovian counterpart to Wonder Woman. The god Jove on her lips every other sentence, this giant counterpart to the more familiar Wonder Woman declared herself to be the champion of her world. Defending its peace and prosperity against any which may seek to ruin it.

Lacking the magic lasso or any form of invisible transportation, this Jovian Wonder Woman possessed incredible strength comparable for her gigantic build, and was just as dedicated towards helping others as Earths own Wonder Woman.

However for all her virtues, this Jovian Wonder Woman had a tendency to be over confident, and even look down on those who thinks less capable than herself. 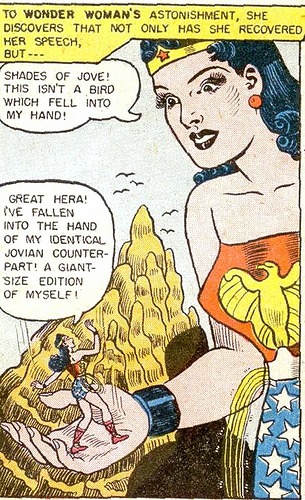 Well at least they kept the villain ideas fresh. Wait no, that’s not right

Greetings @WonderSquadron! Just a heads up: Our archaeological efforts, along with new profiles (of the villain variety) have a shiny, new permanent home all to themselves! Stop by for updates​

You read that right, friends. There are 80+ years fiendish and/or strange treasures to be excavated from the vaults, and we aim to collect as many as we can RIGHT HERE. [image] Table of Contents:

Ps. Glorious images I have discovered in the vaults while engaging in official Wonder-research, friends!

Enjoy, and have a great weekend! 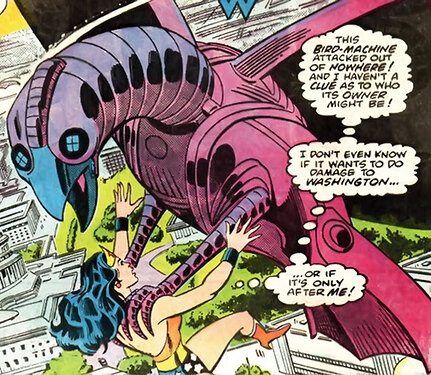 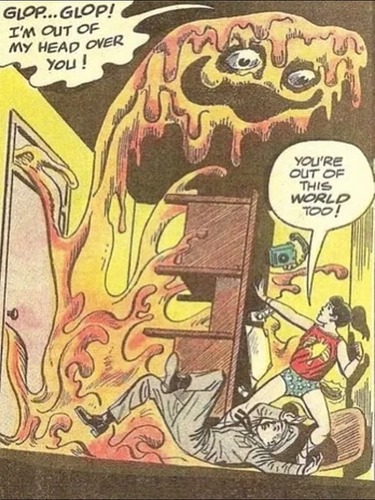 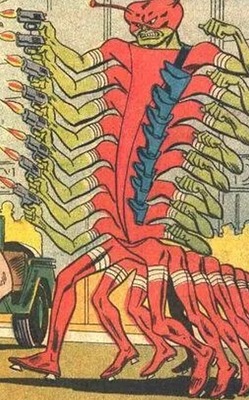 lol, Barista Steve is nothing less than a treasure. 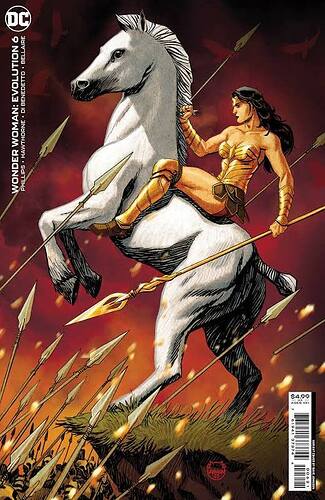 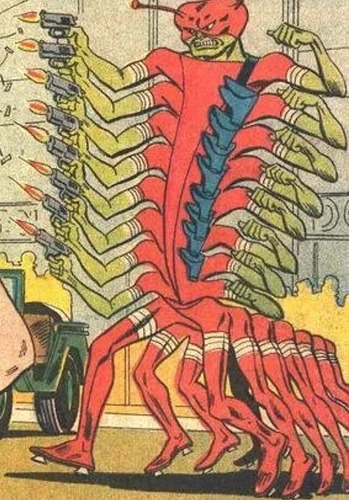 This monstrosity was in one of my Wonder Woman “reference” books (the DK one I think) - it’s the Crimson Centipede! It has stood out in my memory because I have a centipede phobia.

I was compelled to find out more at the time and learned that it has a Rebirth counterpart: 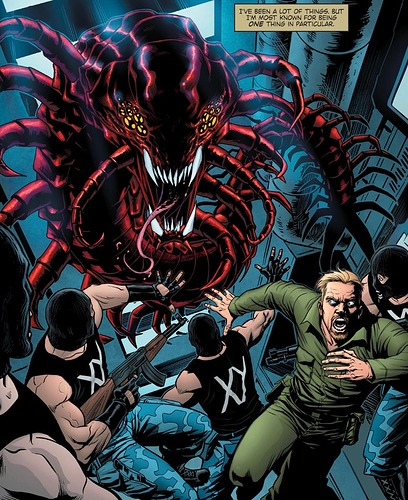 (Steve’s face embodies my sentiments if I encountered that thing.

I think Gloppy is my favorite…

He’s much less threatening in the older version

He’s much less threatening in the older version

The shoes do lessen his imposing nature, I must say…

Okay he’s a little less cute there…kinda getting some “haunted fun house” vibes from his face.

The shoes do lessen his imposing nature, I must say…

It’s definitely the shoes! You’re right! And the story w/ Gloppy…in a manner of speaking, it’s a funhouse type situation…?? 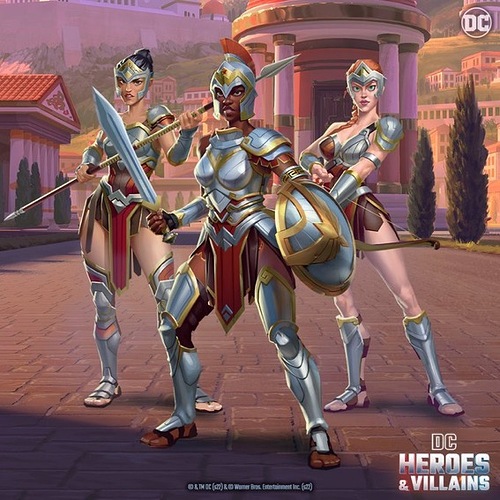 Since it’s still AAPI Month, I have to bring up Peng Deilan - the Wonder-Woman of China! 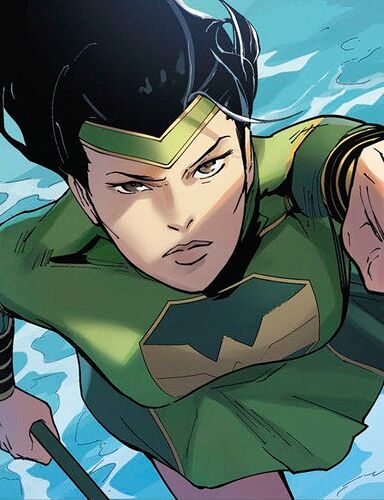 Deilan may not technically be an Amazon, but she certainly upholds all of Diana’s ideals as a key member of the Justice League of China. I thoroughly enjoyed Gene Luen Yang’s New Super-Man series overall and would love to see more of Deilan someday.

The series is being discussed by the DC History Club if anyone wants to check it out.

I finished New Super-Man today. This was a fun series that also had a lot of important stuff to say. Great choice for AAPI month, @TurokSonOfStone1950! Not only because it introduces so many wonderful Asian characters, but because it addresses some of the nastier stereotyping in DC Comics’ past. What an amazing job Gene Luen Yang did! And good for DC in giving him the platform to actively call them out on some of those things. I think I appreciated Kenan more because of how far he came as a cha…

I just noticed Diana’s phrase “by the gargantuan crab of Crete!” Absolutely amazing. I can’t wait to use that in a conversation.

Have we found out a release date for this game yet? I feel like I signed up for notifications a long time ago…

Greetings @WonderSquadron! Just a heads up: Our archaeological efforts, along with new profiles (of the villain variety) have a shiny, new permanent home all to themselves! Stop by for updates​

Woo Woo! Its here! I am so looking forward to this ^^
I’ll keep posting up my supporting character bits on here, though I shall be henceforth posting all villainous aligned individuals over at our sparkling new Encyclopedia going forward~

I confess, to this day I always find it a little surreal whenever I hear the Crimson Centipede compared to actual centipedes. His silver age version was as much a centipede as Batman is a bat~
Now the Rebirth Centipede, THAT was scary.

I wont go into a whole thing on it since Razzzcat has it, but its an alien that gains the abilities of anything it eats and this included a collection of sappy 1960s love songs…and a crush on Wonder Girl?!? From what I understand, Kanigher had been planning to make him a reoccurring character somehow or other.

What is this for?!

The series is being discussed by the DC History Club if anyone wants to check it out.

I really should find time to since im a huge fan of Peng Deilan and that run. I just feel like I really outta reread it again before commenting and ive yet to find the time

Backstory: Professor of space at Holliday college. Astronomo was the foremost mind on the subject of advanced space sciences. One who could invent things such as spacecraft capable of traveling to other planets in a matter of hours.

Studying the skies and the stars, Professor Astronomo could be counted upon to take one glance at any celestial event and somehow deduce whether a planet was hollow or how advanced an alien civilization truly was.

Not one to go on crazy and wild adventures, Astronomo creates machines to do the exploration for him or otherwise will enjoy studying the stars from his Holliday College observatory.

With Astronomo as one of the teachers on the Holliday College faculty, Etta and her fellow Holliday girls would grow quite knowledgeable in matters of SPACE! 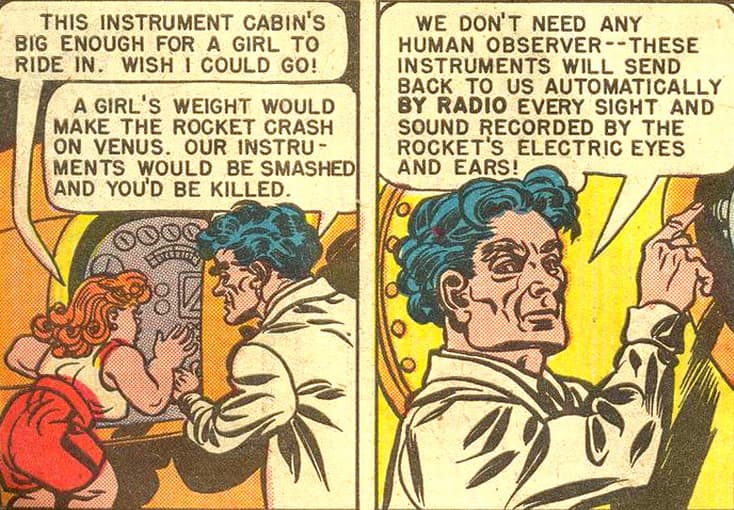 I confess, to this day I always find it a little surreal whenever I hear the Crimson Centipede compared to actual centipedes. His silver age version was as much a centipede as Batman is a bat~

I think I focused on him originally just because he had “centipede” in his name and I liked the idea of Diana fighting him. Like, “wow, Diana even fights centipedes! She really is the best!” - since I detest them. But I wasn’t actually grossed out by it like I would be a real centipede.

(And look who is right next to him in my book, @Razzzcat. I have no memory of seeing Gloppy before though.) 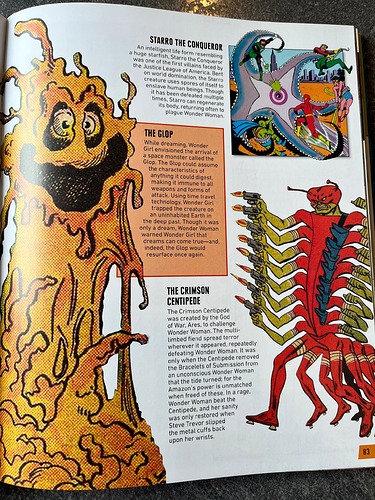 Wow, he even warrants a place on the timeline: 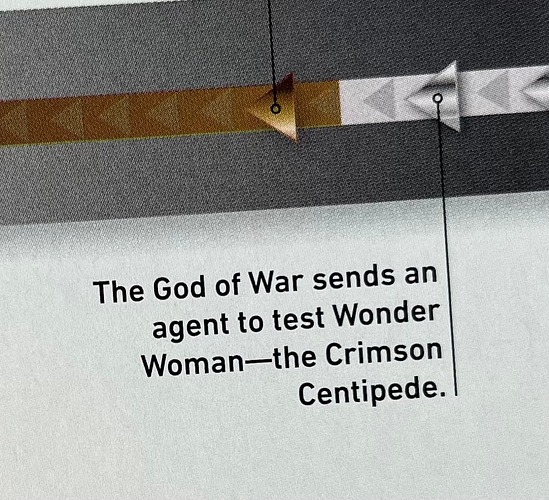 Wow, he even warrants a place on the timeline:

Eh? Someone made a timeline for Wonder Woman stuff? Like, chronological in universe? Thats certainly neat.
A bit weird and surreal that they would specifically mention Crimson Centipede considering how overall minor his story was in the grand scheme of things. Neat that they included him though

Backstory: Roberta ‘Bobby’ Strong came from a family of adventurers and big game hunters. A no nonsense individual who was confident in her ability to tackle any situation which came her way.

A member of the Holliday College Beeta Lamda sorority, Roberta was one of those brave individuals who would follow Ettas lead in going on wild and crazy adventures. Be it fighting aliens, modern day romans, wild beasts, or nazi terrors.

The Holliday girls were no stranger to danger, willing to tackle any threat which may endanger others. With Roberta being no exception. 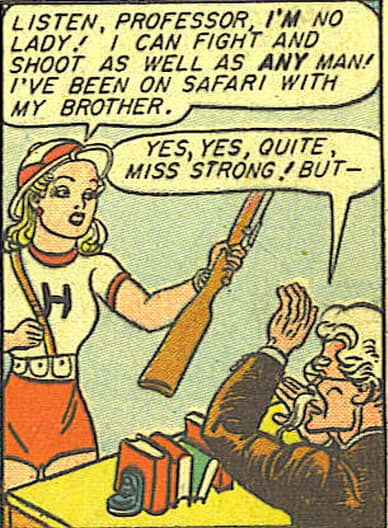 Eh? Someone made a timeline for Wonder Woman stuff? Like, chronological in universe? Thats certainly neat.

Yep! I haven’t looked in this book in awhile so I forgot about it. It spans 4 pages. 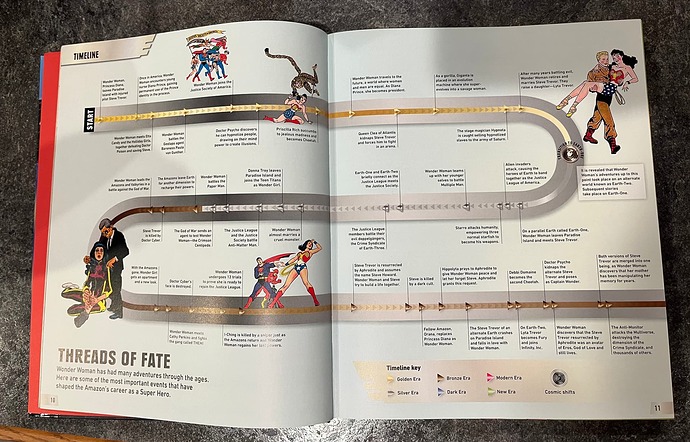 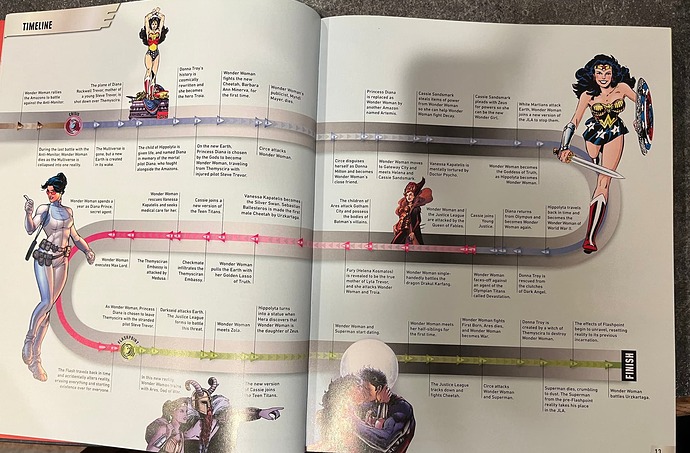 DK makes some of the best reference books for fictional universes. The only downside is that with ongoing stuff they quickly become outdated. This one concludes just as Rebirth is starting. 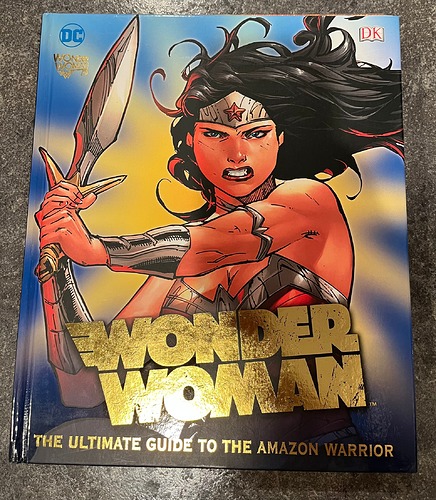 I feel like “weird and surreal” sums up quite a lot of Wonder Woman history, to be fair. Maybe the author started to get overwhelmed by what actually was important vs interesting. (Or maybe they have a centipede phobia like me and couldn’t help fixating on the guy.

For the silver age it mentions Multiple man, that dumb cursed prince who is forever taken out of context, Paperman, and yeah, Crimson Centipede…
Like I love wierd and surreal and Multiple Man was one of Wonder Womans BIG reoccuring foes from the period. Im just surprised Angle man and the Duke of Deception didn’t garner any acknowledgement since they were the two big bads Kanigher used the most.

Bronze age hits pretty much all of the significant notes, though skips that silly five minute period where Wonder Woman worked for NASA and that tribe of Amazons living on the Amazon river.

The second half of this is surprisingly packed and dense with the writer of this history covering nearly every storyline of note. Kinda shows off which era the historian was heavier on knowledge wise.

Not that I can throw shade. Basically every story mention of this involving the justice league or justice society is one big blind spot for me.