Am I seriously the only one who read 2018’s American Carnage?

Vertigo died a long time before the imprint got its plug pulled. Its success was based almost entirely on reprinting Sandman and Preacher trade sales. To be fair, those are great comics. But when was the last time Vertigo did something truly important? There have been some enjoyable Vertigo books in the 21st century. The Losers was a fun spy comic with beautiful art provided by Jock and a rotating cast of other talented artists. Some of the Sandman sequels/spin-offs were interesting companions to the original, even if they never lived up to it. Daytripper and Scalped are the two most promising candidates. Both were relevant and fresh, and showed a level of craft rarely seen, especially not by fairly new creators. But they were exceptions. Not the rules.

Anyone remember the 2018 Vertigo relaunch? Yeah, me neither. The books didn’t last long, and didn’t receive a lot of critical attention. They were, near as I can tell, base-level satire. Horror/comedies with a point to make, but with really no clue as to how to make it. And then this came along: 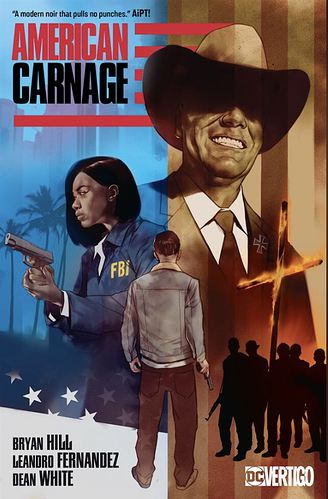 In an age when everything has a sci-fi twist and a genre-bending edge, not to mention thinly-veiled political analogies, it was almost refreshing to see a book that wanted to tackle a problem as it was, in real-life. American Carnage is a book that feels more relevant than anything else I read from 2018.

I’m a fan of Bryan Hill. He’s done so few bad comics that it’s honestly saddening to me that more people aren’t. Postal, for (basically) a first comic, reads as well as many other comic creators’ magnum opuses. His run on Detective Comics was compelling and enjoyable, and Wild Storm: Michael Cray was, in my honest opinion, better than the Warren Ellis Wild Storm series it was a spin-off of. Point being, a new book from him (drawn by Leandro Fernandez no less) was an immediate draw. And the book certainly didn’t let me down.

For those who don’t know, the book’s premise is simple, but effective. A mixed race, white-passing ex-FBI agent is tasked by his former colleague to infiltrate a white supremacist group led by a popular media figure.

The twist? It pulls the same trick as Scalped, but on a much grander scale. No character is purely a hero, but no villain, not even the horrible racists, is portrayed as cartoonishly evil, either. It doesn’t invite sympathy with them, to be sure, but they’re humans. Monsters, too, but the book is clear; no one is born that way. They make their choices. People shape their minds. Their attitudes are a product of their lives, not the other way around. It’s a much more nuanced depiction of racism than most versions of it I’ve seen in comics, or any other medium, for that matter.

Conversations in the book are layered, careful dissections of American race issues. The dialogue services the thesis of the book in a way that I haven’t seen since Alan Moore’s prime. That’s not hyperbole. The political leaning of the book isn’t necessarily Democratic or Republican, but it’s also not a South Park-style, “both sides are dumb” kind of thing. It’s an examination of how in many ways racism persists to this day because there’s a tendency to treat it like a political football, rather than actually try to understand it, and where it comes from.

All of this is to not talk about Leandro Fernandez, whose art is excellent. Thick shadows, masterful facial work, and meticulous storytelling make the book feel unlike anything else on the shelf. Its aesthetic is all its own, and it helps the story run like a well-oiled machine; enforcing the mood but never at the cost of the plot.

And it’s a good plot, full of twists, turns, and reveals. Complex motivations. Betrayals. And a far cry from a happy ending. I don’t want to spoil anything, because I really want to get people to read the book. Honestly, my only problem with it is that the pacing gets a little bit fast towards the back half, as the series ended before it was initially planned to, but it’s never as much of a problem as I’ve seen it become in other books I’ve loved that came to a premature stop.

The point is, American Carnage is going down in history as the last truly great Vertigo book. The last one with something to say. The last one that said it well. The last one with a creative team so good and so clever that you won’t even realize how good they are. It comes highly recommended from me. Please read it, it’s well worth your time.

I really enjoyed it. I started trying to read it monthly but ended up binging the last 5.

It was my read first every month it came out

What did you think of the ending?

I don’t remember much

Then both the black.guy who passed as white and the rich.guy died?

I temember the daughter and not really knowing what she wanted.

Ainly I temember the atmosphere

I’m just going to spoiler blur this whole post out, but here’s the ending as I remember it, and what I thought:

Basically, in order to cover up her involvement, Rick sends a voicemail to the FBI agent who enlisted him (I forgot her name) telling her what to tell her superiors after she kills him. Then, he goes and kills Wynn Morgan’s daughter in the hopes that it will put enough attention on him that he won’t do anything else illegal for a while, and that his mission won’t have been in vain. Jennifer’s daughter (Morgan’s granddaughter) ends up in Morgan’s care. On the way to kill Rick, the FBI agent gets pulled over by a cop and shot. She then kills him, and we learn that the hitman in the stereotype Obama mask was a police officer. It’s implied that he was like Rick: a sleeper agent in their ranks. Only he actually ended up loyal to Morgan. I think it’s a fairly good end to the series, but I definitely think there was initially supposed to be more to it. For instance, the FBI agent’s MS diagnosis never comes back.

I liked it. The comparison to Scalped is a good one. There’s some 100 Bullets in there too. Felt the ending was a bit rushed, though, perhaps due to cancellation.

American Carnage is a really intriguing series! Paired with great art too! After reading it, I was hoping there might be more, or a followup. It was just that interesting!

Loved it but it did feel like it could have gone for more issues.

It definitely felt like a Scalped-esque story with a 100 Bullets aesthetic.

Looks fun, I’ll check it out. I’ve only read a couple of Vertigo titles but I’ve really liked them so far. Specifically I really loved Daytripper, and I’m currently making my way through American Vampire. I’ve got to check out Sandman and Y the Last Man at some point too. Just haven’t gotten to them yet.