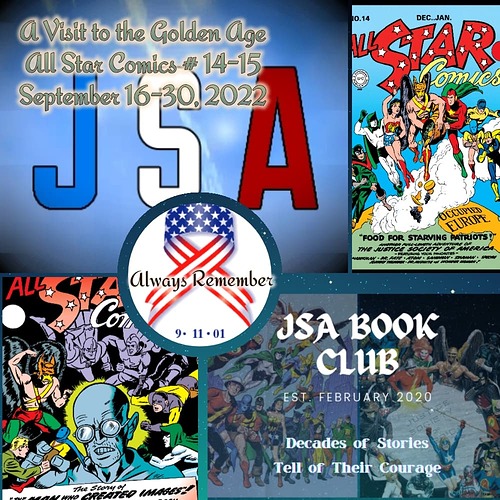 Hello all and welcome to our second September session for the @JSABookClub. This month we will be taking a trip back to the Golden Age and some early stories that feature the JSA. In the first the members of the JSA fight hunger as they bring much needed food across enemy lines to feed Allied resistance fighters across Europe. The second features the first appearance of one Henry King Sr. AKA The Brain Wave. Before we get to these tales of daring though we must have the…

Join us for all things JSA by smashing the JSA BOOK CLUB link!

Warning
Remember the issues we are currently reading are a product of their time. Some material may contain attitudes, art or language that may not be in line with modern ideals of equality and acceptance. Feel free to not read anything that makes you personally uncomfortable.

And that’s all for this month folks. Next month we will be taking a look at some more stories from the JSA Classified so be on the lookout for that.

For November We will be going back to the 1999 JSA series in honor of the JSA’s triumphant return to an ongoing series this month.

For December I will be taking a break because of various holiday commitments so I will see you all again in January 2023!

This is the first issue beyond the end of events in All-Star Squadron. Obviously these events would need a massive rewrite as several of these heroes would be kept out of Europe by the Spear of Destiny.

It’s excellent to see the work of the resistance fighters in Europe being showcased at the time. Their work got overshadowed in later decades. They weren’t waiting around for the Americans, Soviets and British to save them.

Starman wonders how they can transports tons of food to Europe. Maybe use your secretary’s invisible jet? I assume the food capsules were originally designed on Thanagar and Katar went back in time to give them to Carter.

My favorite story is the Dr. Fate one. Using Hitler’s interest in the occult was a nice touch. What’s weird is that the only magical power he really uses is flight. He teaches the prisoners in the work camps to sabotage the shells.

And at the end they all get together near Moscow to help the Soviets drive away the Germans in the nick of time. No? Maybe next issue.

ALL-STAR #15
Making people appear out of thin air to do your bidding is a pretty good super villain power. When the thugs disappear the court system isn’t overrun with flunkies. Quite considerate.

The real fun is in the bracket scenes where Wonder Woman has no one turn up at the meeting and gathers the girlfriends to go after Brain Wave to show up the guys. There is no mention that Hawkman’s girlfriend is indeed a heroine in her own right. Wonder Woman at least gets to be in on the action in this story.

Note in both of these issues Jack Kirby does some of the Sandman art and Wes teams up with Sandy the Golden Boy for the first time in All-Star Comics.

14- Still 5 members of the original team. I guess Hourman got the worst part of the deal.

How about you join anyway Wonder Woman?

My favorite is Hawkman. 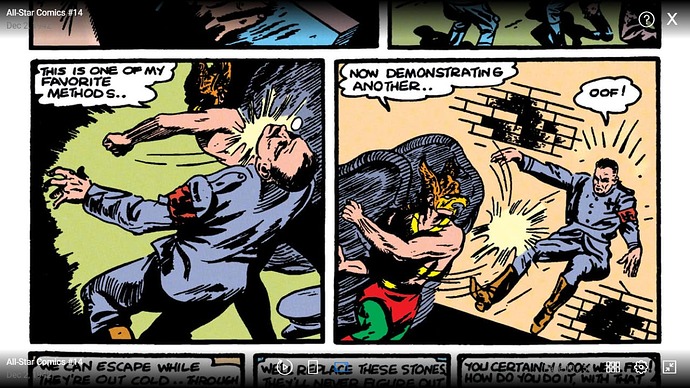 After the last page I presume Johnny died. I enjoyed this issue.

15- this was my favorite image.

Him having blond hair in the flashback felt wrong.