Some say there’s a Snyder Cut. Some says there is not.

As for the beast itself, do you believe–

I’ll stick with Variety’s reporting that the cut still needs millions to complete and will not happen.

Given the timing and everything we know about the behind the scenes drama, I believe Snyder finished filming everything but–outside of what was shown in trailers and completed for the film–never got a chance to work on post, so things like CG and sound editing (not to mention scene editing, color saturation, etc) remain unfinished. If there is a Snyder Cut, it’s largely actors against green screens and unfinished effects with lots of background noise (and maybe even storyboards for scenes that were completely CG).

things like CG and sound editing (not to mention scene editing, color saturation, etc) remain unfinished. If there is a Snyder Cut, it’s largely actors against green screens and unfinished effects with lots of background noise

Why are you ignoring the dozens of screenshots from numerous different scenes released by Snyder & Momoa & Ray Fisher showing so many shots with clearly completed visual effects? It may not be 100% complete, but the picture you’re describing, that it’s all actors against green screens, is plainly false. 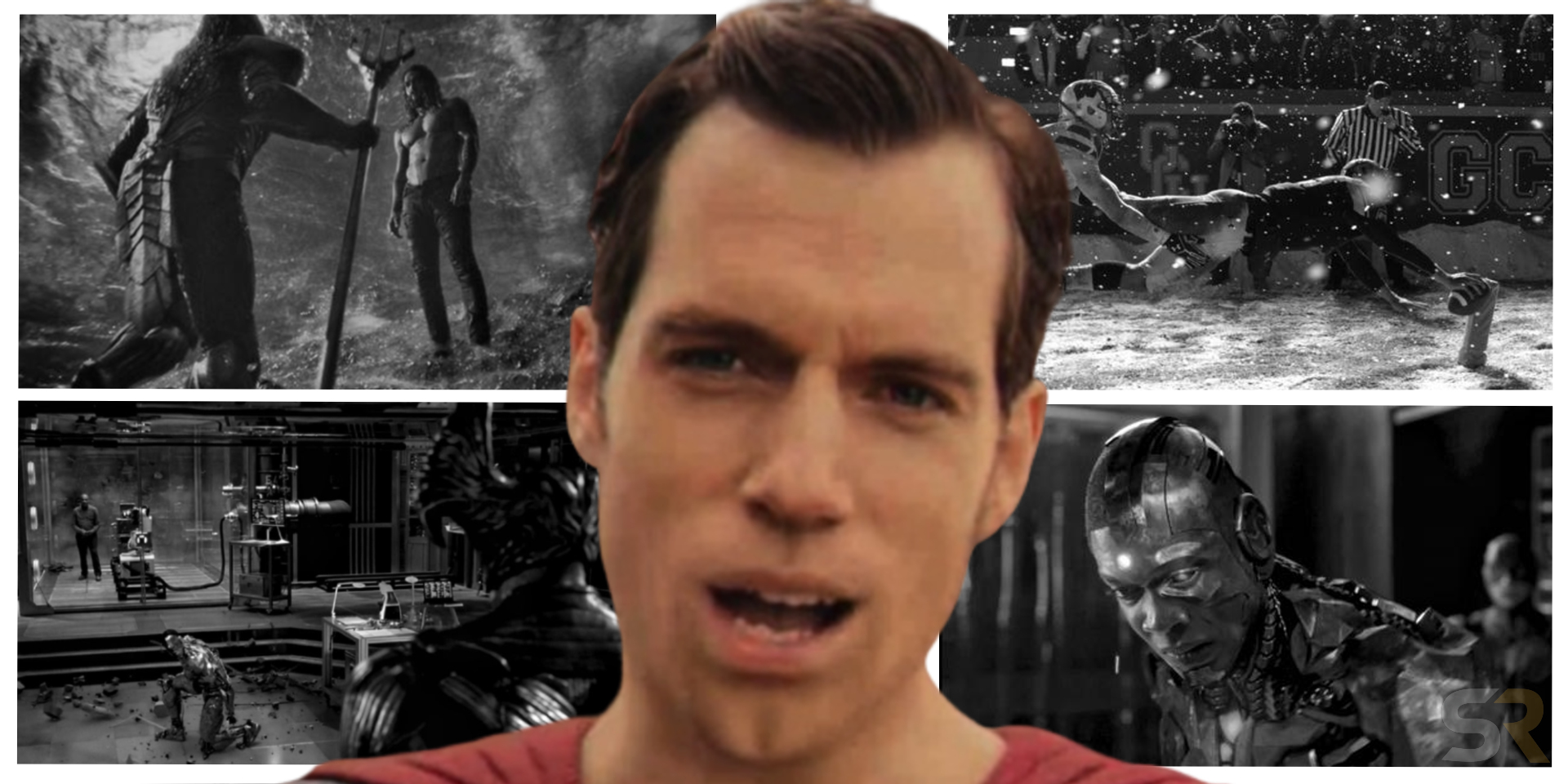 The mustache is only the beginning.

I’ll stick with Variety’s reporting that the cut still needs millions to complete and will not happen. 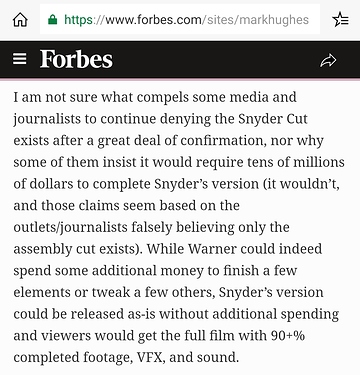 Even your source admits that WB needs to spend money to finish it. Yet somehow doesn’t give a figure or breakdown and has no experience in those areas. (Check his Forbes bio)

Your source fails to address the key issue.
Is WB going to release the ”Snyder cut”. Variety’s source says “No.”

You want to rubbish Variety and their long history of real journalism about the actual goings on inside Hollywood studios. Go ahead. You don’t have real journalism, only an opinion piece, by someone who has financial incentive to show he’s on Snyder’s side. 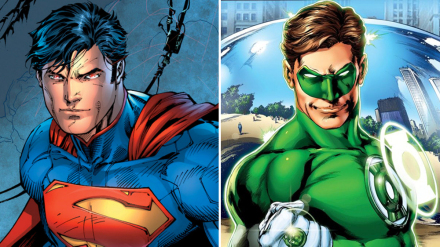 DC Films appears to have hit its stride, rebounding from the commercial failure of “Justice League” and the critical drubbing of “Batman v. Superman: Dawn of Justice” with a…

Why are you ignoring the dozens of screenshots from numerous different scenes released by Snyder & Momoa & Ray Fisher showing so many shots with clearly completed visual effects?

These screenshots are just that, a particular, individual frame. You are supposing that all frames in that “shots” are complete. Somehow, with all this, there has been no leakage of any video. You do know what key frames are? And that it takes 24 frames to make up one second of a film.

Somehow, with all this, there has been no leakage of any video. 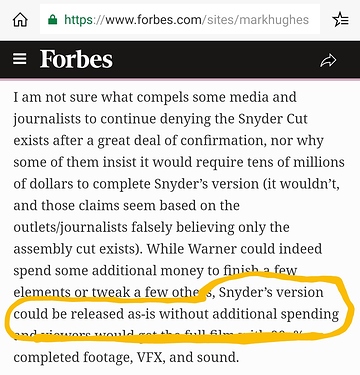 Would I like to see a Snyder cut? Absolutely! Would it be the end of the world if it didn’t come out? Nope.

His union required first cut with no VFX could be released. Could does not equate to will.

So now you want to believe in criminals.
If that is footage, it is owned by WB and released without their consent, whoever did it is guilty of piracy which is a serious crime.

For all we know that maybe the only footage of that scene that is in anything to a complete state, and may not actually be finished footage, as their may be other elements to add.

The public has been led to believe the “Snyder cut” would have been longer.

This in no way contradicts Variety’s report that the film will still require millions to complete, nor that it will not be released.

It is obvious WB doesn’t give a rats about the “Snyder cut”. They aren’t taking legal action, which they easily could do, given the legal staff they have. A few screen shots and a snippet of video from a dead film gets released. If WB cared about releasing the “Snyder cut” they would be required to take legal action in order to show they care about their copyright of that footage or any stills released.

So now you want to believe in criminals.
If that is footage, it is owned by WB and released without their consent, whoever did it is guilty of piracy which is a serious crime.

VFX companies release VFX reels all the time. I guess you think the VFX artists themselves are criminals

Thanks for posting that I’d never seen this footage!

If the vfx contains copyrighted material or characters they must have permission of the copyright owner. There are often items in a contract that allow a vfx company to release portions of their work, generally for promotional purposes. In that case, they have the contractual ability.

Do you have any evidence that the clip in question falls under such a contract?

You are still avoiding the one piece of data, because you can’t refute it. WB is the only entity that owns the “Snyder cut” and has not released it and has announced to plans to release it and a highly reputable industry news report has cited their WB sources as stating “There’s no way it’s ever happening.”

It’s irrelevance is what eats at Mr. Snyder, and, IMO, that makes its non-release so much the sweeter.

Okay-- just for the sake of exploration, not argument, let’s go with the rough cut theory.

Which rough cut is it you want to see-- because there would likely be TWO. And they would not be the same thing-- just as there’s a third rough cut by Joss Whedon, possibly a nearly completed cut by Joss Whedon, and the final, released version cut together by a Warner Bros editor assigned to bring the movie in under two hours.

In an alternate universe, Henry Cavill signed on to two more Superman films, and Zack Snyder made two more amazing films that everyone enjoyed. The people were happy, and nobody cared about money, nor did they care about the fact that Marvel had been bought by Disney because those who enjoyed comics enjoyed all the movies equally.

But in this universe, DC and Warner Brothers saw the money Marvel was making and decided to do their best to emulate what they were doing, because they too, wanted to make a lot of money. So instead of Zack Snyder making two more awesome Superman movies, he got saddled with a revamp and a retcon, and was told to make a Batman Superman movie in order to speed up the plans to bring about a Justice League film that would compete with “Avengers”

What we got were one or two lines that sounded like a Batman movie, and then the rest was a bunch of prattling that ended with a Giant doughboy fighting 3 of the Justice League. What have we seen in the Batman V Superman Film, The Wonder Woman Film, and the Justice League film? In all three films ALL 3, team of heroes fights ONE GIANT GUY, who is of course super powered and evil.

Steppenwolf? That one guy from mythology? Doughboy Zod?

What would have been great, is for the accounts and lawyers salivating over money to stop screwing around, and let real artists do their craft, and let them make amazing films that will not only exceed expectations, but turn the kind of profit that these same greedy weasels can celebrate.

If the people running warner brothers truly loved their characters and the things that they stand for, we would not have to take to forums and complain about whether or not there’s a good cut of a terrible film on the floor somewhere. I wish Zack Snyder had been given not only the budget he deserves, but… TRUST. THE TRUST HE DESERVED TO DO A GOOD JOB.

The love he showed for the Watchmen movie alone proved that he should have been the right person to do the job. Unfortunately for him, he suffered a tragedy of his own and had to step away from things to deal with it. I honestly believe that Christopher Nolan, Zack Snyder, and Patti Jenkins have shown us that they can make amazing single character films, and I imagine if all three worked together could save the DC Universe of movie characters. Why we settle for the things we settle for with regard to the DC universe, is beyond me.

What would have been great, is for the accounts and lawyers salivating over money to stop screwing around, and let real artists do their craft, and let them make amazing films that will not only exceed expectations, but turn the kind of profit that these same greedy weasels can celebrate.

So you are saying filmmakers need to have unlimited budgets.
You are saying trust a guy who couldn’t return a 3x ROI multiplier to have an unlimited budget to make films.
So over a quarter of billion dollars to make a movie (BvS) isn’t enough. Aquaman had a budget of $160 and smoked all of Snyder’s movies away in revenue. Wonder Woman budget was $150 million and it grossed $150 million more than MoS. A movie that had a budget of 75 million dollars more than Wonder Woman.

By your rationale, WB should be able to charge $100 a ticket to see these films. After all, you want to see films that exceed expectations, you are willing to pay a lot more to see them, correct? Or does that rationale only apply when it is other people’s money?