How is Elvira? I will be getting that book in June once the softcover is released.

Batman/Superman: World’s Finest: 2 issues from 2022
Writer: Mark Waid
Guess who wound up at a comic shop again. And I’m a reasonably simple man. I see yellow oval, I see Mark Waid, I at least give it a shot. This seemed solid as stray two issues go.
1,009.

Star Wars: Knights of the Old Republic: 3 issues from 2007
Writer: John Jackson Miller
Still in a Star Wars mood, so I got back to this. I love this title.
1,013.

April was by far the most consistent month so far. I didn’t have a single day drop below six issues, which is the minimum to reach 2022 by the end of the year. This also made it my most productive month so far, breaking the record I set in January. Total, I real over 220 issues.

I referenced it earlier, but one of the best things I read was the new Astro City Metrobook collection. I only got through the first six issues (the initial series released under Image) because I’m trying to savor it, but it is so good. I’ve read large chunks of AC before, but this time I’m going straight through, first issue to the last. It’s really nice to see a superhero book that’s an alternative to the Big Two, but doesn’t become a grimdark, cynical mess. The closest thing I can think of is Invincible, and even that is a far cry from the simple superhero goodness that this is. Busiek really knows how to make superheros relevant and down to earth without relying on shock and gore, which I appreciate a lot.

Honestly, I’ve taken so long getting to this that I kind of forgot everything else I was going to say. I was taking a history of comics class, and we read this little book called Watchmen (I’ve never heard of it, and I don’t think the writer or artist did anything after, but it’s decent) so that’s on there. I also reread the Silk Spectre Before Watchmen mini which I remembered being good and… I remembered wrong. I wanted to like it. It’s written by Darwyn Cooke, so there’s part of me that wants it to be amazing, but it’s just very Scooby-Doo-ish. Like, this guy’s using drugs to brainwash hippies into being die-hard capitalists and it just feels very not Watchmen. The only thing Watchmen about it, really, is it can’t stop reminding you every five panels of what happens in the original book. At a certain point, foreshadowing becomes overshadowing. But then again, it’s not really foreshadowing when everybody reading it already knows what’s coming.

Then there’s Multiversity, which is… interesting. Each issue is basically a mini series and moves way too fast. And, up to where I am, it seems like every issue is just a pastiche of a different big DC book in one way or another. The Society of Superheroes and whatever the social media one was were both more subtle, but both play on a lot of the same stuff as New Frontier and Kingdom Come respectively. Then there’s Pax Americana, which just doesn’t even try to hide the fact that it’s Watchmen. Which, on one hand is interesting. The Charlton characters starring in Watchmen feels like one of the biggest “what ifs” of the comics industry. But at the same time, the characters have to be changed so much that, for the most part, they don’t even resemble their originators, and instead just mimic the Moore creations. It’s one thing with Blue Beetle and Question, and Nightshade is actually very different from Silk Spectre (probably because Spectre was really more Black Canary) but, like, Captain Atom just isn’t even close to actually being Captain Atom. There’s no attempt to pretend like he isn’t Doctor Manhattan, which he’s just not. I get that Morrison was playing solely with the pre-DC version of the character (so he’s not even Nathaniel Adams) but still. Also, it’s forty pages. Watchmen is well over 300. There’s just no room for that type of story. 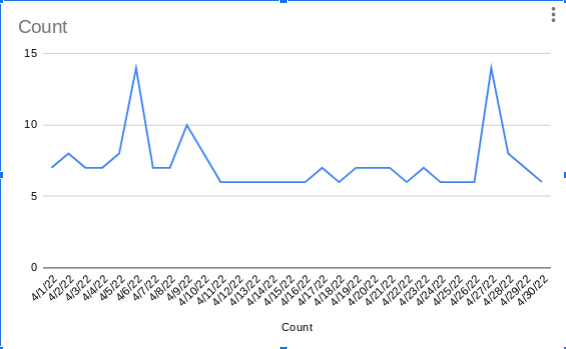 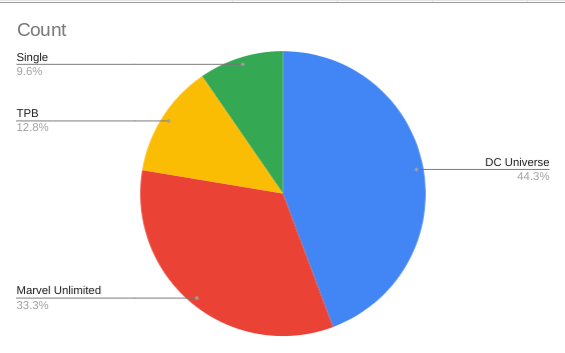 It starts out great, but then the Knights of the Round Table come in, and the actual plot finally starts, and I start not caring. I just wanted a comic where King Arthur and a generic protagonist fight a bunch of aliens in the future, but ended up being disappointed.

Has some pretty good stuff, and also some things that leave me confused, as most Morrison comics do. The confusing stuff does have it’s ups and it’s downs. Some of it is good because I’m given a lot to think about, and when I come up with an answer I end up thinking it’s brilliant, however the bad part about it is sometimes I’m not smart enough to think of an answer to my questions and I ultimately don’t understand whatever happened.

Star Wars: Knights of the Old Republic: 28 issues from 2007-2010
Writer: John Jackson Miller
I sort of forgot to stop reading this. I cannot express the level of hype I have for this book.

It (and those who are familiar with the game will understand why I consider this relevant, while those who aren’t shouldn’t worry too much about it) doesn’t spoil the events of the game and in some ways even enhances them? Like, the game characters aren’t a big part of this plot; all the leads here are a degree of separation or two removed from the game’s big names and it takes place several years earlier (six, I want to say?). But it gets you accustomed to the world, expends a surprising but not unwelcome amount of effort on giving Malak of all people a lot more depth, and kind of bridges the gap between the Tales of the Jedi comics and the KotOR game.

But that’s all kind of a sidenote, because as a distinct story in its own right, this is just good. The protagonists all became favorites very quickly because they’re just memorable, likeable, and don’t feel mined from the same rather limited selection of archetypes you see for most Star Wars protagonists (which isn’t horrible because they’re all strong concepts, but it does feel like any given character from the movies has about a hundred suspiciously similar wannabes in various places, often including elsewhere in the movies). Plus, it’s not necessarily fully a laugh-out-loud comedy book, but its comic relief elements are major highlights because it manages to be consistently really funny while telling an overall serious story.
1,041.

Star Wars: Knights of the Old Republic – War: 5 issues from 2012
Writer: John Jackson Miller
Zayne Carrick is a treasure and it’s good to see more of him, but this mini feels like an unnecessary postscript to the ongoing rather than a fleshed-out follow-up. A big part of the charm of the ongoing was the cast, so a sequel series that has only Zayne in common (Gryph and Jarael get a scene each, but aren’t really plot-relevant) is a bit of a letdown. There are some passingly interesting new characters, but not in the same way.

It reads like Miller was… kinda done telling the story he wanted to tell, then got told to do five more issues, and scraped together whatever he could come up with. And it’s not bad or uninteresting, entirely, it just seems like it’s there for the sake of having another mini. I suppose Dorjander Kase is a suitably intriguing antagonist, but he doesn’t have much to work with.

I was trying to figure out what else felt different about this, and I realized a big one: In terms of my praising the ongoing for its comedic beats, I feel like this book by contrast takes itself a bit more seriously. It’s not 100% gritty and there are some, uh, Zayne-y schemes (sorry), but it doesn’t really have time for much in the way of actual gags.
1,046.

Sorry it’s been a spell…the stories are exactly what you’d expect, light,jokey,pun-filled and also what you wouldn’t expect. There’s an actual continuity flow to them, it’s not like the DC Elvira book, and I’m good with that. Well worth it to Elvira fans. 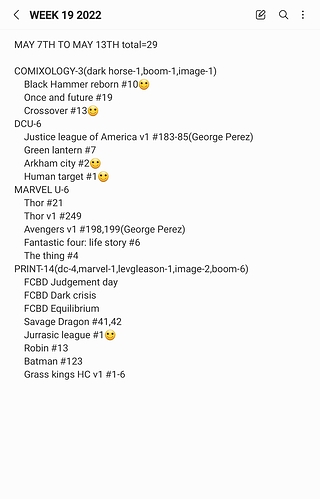 Give ONCE & FUTURE a spin. It’s a book where a bloke and his grandma take on King Arthur. Solid good stuff.

I had this wicked breakdown of the first 13 weeks, was all set to pie-chart the hell outta it, annnnnnd…now it’s week 20. Mid-year tally coming soonly.

That book is soooo good.

I started with Wic/Div, fell off(need to get back), started on Once and Future but then got swallowed by DIE. Gonna get caught up before hitting Wic/Div again.

And then i read an issue of ETERNALS and I’m like, " maybe there’s TWO Gillian’s…?".

Thst is what I was hoping for! I have one of the old comics in a long box and it was fun but I wasn’t sure if the whole thing would be fun.

There is an Elvira one-shot coming out as well as a new series!!!

It totally goes with the tone of the newer books that DYNAMITE is putting out. Our snarky mistress of the dark, just doing her thing. They aren’t WATCHMEN, but they aint SPIDEY SUPER-STORIES either.

I just looked it up and saw Dan Mora does the art, and now I might have to check it out. Thanks for the suggestion!

I read all of these years ago before I knew who John Ostrander was, so this is a neat revelation. I loved his Suicide Squad, and I enjoyed his Star Wars comics as well.

It’s been years, but I have fond memories of this series and character. This was a sweet cover: 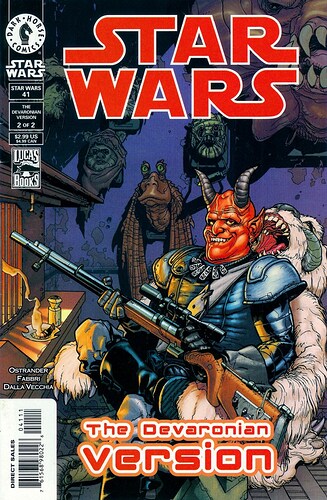 I enjoyed Rogue Squadron as well. The Expanded Universe was a lot of fun for me. I read a ton of the novels as well. I was sad when they decided to ignore it for the new movies.

I read all of these years ago before I knew who John Ostrander was, so this is a neat revelation. I loved his Suicide Squad, and I enjoyed his Star Wars comics as well.

Yeah, Ostrander is pretty reliably good. I also really like his Spectre and Martian Manhunter titles; those deserve more attention.

I enjoyed Rogue Squadron as well.

The comic so far feels a little truncated next to the novels, and I could list some gripes with those, but overall I think I like them, yeah.

The Expanded Universe was a lot of fun for me. I read a ton of the novels as well. I was sad when they decided to ignore it for the new movies.

I tend to agree. I know there’s a lot of good stuff in the new EU (I haven’t really gotten into much of it yet, but I will at some point), but I feel like a lot of babies went out with the bathwater, and quality of any given installment aside, the sequel trilogy makes for a generally less compelling post-Return setting than the old EU.

I also really like his Spectre and Martian Manhunter titles; those deserve more attention.