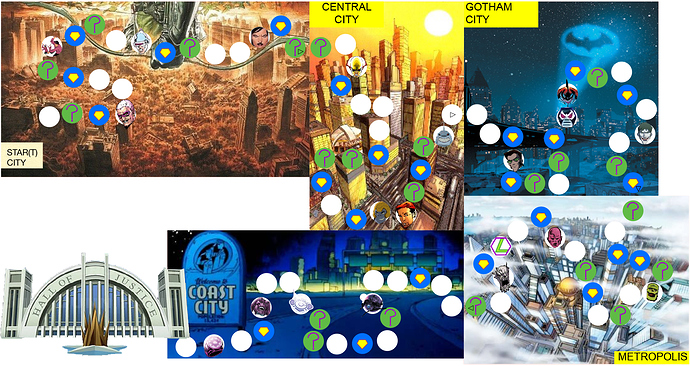 image1960×1041 1.77 MB
The name of the game is 𝟙𝟘𝟘 𝕄𝕚𝕝𝕖𝕤 𝕥𝕠 𝕥𝕙𝕖 ℍ𝕒𝕝𝕝 𝕠𝕗 𝕁𝕦𝕤𝕥𝕚𝕔𝕖! We need heroes to tryout for the Justice League and gain powers, make alliances, and fight villainous foes along the way! How do you get there, you ask? Keep reading below!:

𝐒𝐩𝐚𝐜𝐞𝐬:
Depending on the space you land on, different things can happen.

If anyone wants to play, comment down below! The game is scheduled for Tuesday at 7PM EST

If you want to join, pick the emoji you want to play as and comment down below. Remember: the game is Tuesday at 7PM EST

Is this the game reep you were talking about

If nobody’s mind, I’ll be a Green Lantern. I never play this kind of game before, but I’m willing to give it a try.

Is there batman if so I will be him

Yes, and both of you are on the gameboard.

It just needs to be an emoji. No superhero needed

I wish I could play…but I can’t

Yeah…I have a life

My gosh what is this?! I’m gonna need to read the rules later. Right now I need pizza.

I really wish I could play but I have a life

It’s okay if you can’t make it.

The game is in a couple days, so if anyone wants to join, now is the time (or you can wait to join Monday).

I would like to join if that’s alright. Can I be

You have been added to the gameboard!

The second post is now a wiki, so anyone can change the name of name their default attacks, if they want.

The game is TOMORROW AT 7PM EST!

Join now before it’s too late! Unless you don’t want to play, of course. Your choice.

Put my trident on start, wasn’t sure if you were assigning Attacks&DP so left it blank for now. Thank you for putting this together @ReepDaggle you Rock!