This has to be DC’s best year for movies in a long time. Both the Justice League and The Suicide Squad are fantastic films. Zack Snyder and James Gunn did an amazing job! One about the formation of superheroes from all over in order to stop an evil force from taking over the planet. The other revolved around both villains and antiheroes from Belle Reve prison to do work for the government so they can accomplish a nearly impossible mission that’ll cost most of them their lives. If you had to choose, which one was better?

For me, I feel like it was The Suicide Squad. Due to comic book accuracy, beautiful storytelling, action, HEAVY violence, and emotion. Viola Davis, Idris Elba, Margot Robbie, and John Cena were my personal standouts out of the film. Everyone overall also did a great job in terms of portraying each character. James Gunn nailed it! 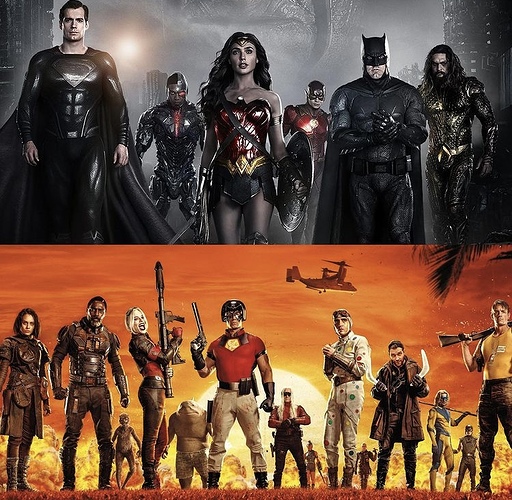 I think I’d have to give the nudge to ZSJL. TSS was fun, but I think it kinda meandered a bit in the first half. Meanwhile, ZSJL had a stronger pace (which is surprising since that movie’s about double the length of TSS), had stronger characters and was just more entertaining for me.

Justice League. Not even close. I kinda have to care about your characters if you want me to worry that they’ll die, and Gunn completely failed in that area.

I cared more about King Shark in Gunns movie than I did about Superman in Snyders.

I’ll have to disagree there. I think Gunn did a fantastic job making me care about the characters.

For me personally, Suicide Squad wins it out.
Snyder having his vision realized was neat, but… if it wasn’t for that, I don’t think it’d really even stick in my mind.
Edit: though actually, thinking more on it, there were some really good things in Snyder’s Justice League that helped carry it. Flash’s characterization being one of them.

I couldn’t even manage to care about Ratcatcher, and she’s clearly meant to be the emotional core of the film. And it’s not as if Gunn is incapable of making compelling characters. I care about every single member of the Guardians of the Galaxy. Conversely, my only real concern throughout TSS was, “Don’t kill Harley. I’d like her to be able to appear in another film that doesn’t reduce her to a series of punchlines.”

This is a really tough one. I’ll give the Snyder Cut the edge in storytelling and visuals, but TSS gets it in humor and action, and I think they both had great character work, just done in different ways. The main heroes in ZSJL obviously went through heavier and more detailed journeys, especially Cyborg who I was so glad to see have a more fleshed out arc, but I felt that TSS’ character work was pretty efficient despite the lighter (but still brutal) tone. Cleo’s incredibly sweet nature endeared me to her almost immediately, and beyond being hilarious and badass as always, Harley’s monologue after killing Luna was really well done and shows that Gunn has a great understanding of her character

I feel like I might give the slight edge to TSS overall since I know it’s gonna be the movie I end up rewatching more, much shorter running time and all, but I still have a ton of love and respect for both flicks. At the end of the day, I’m just really glad to see DC releasing 2 fantastic movies that have been mostly well-received by both fans and critics

I mean Gunn has said “Don’t get too attached.” a lot recently.

Meaning you shouldn’t care so much about these criminals because they are all expendable and almost all of them were going to die. That’s what he was going for.

Boomerang’s death hit me hard. Harley’s cry for him was just to soon. They were both villainous friends.

Well, I only had an interest in giving one of them a try, so it’s an easy vote for The Suicide Squad for me.

Lmfao you have good taste!

I think the original plan for justice league was for it to be a 2 part movie. That’s what should’ve end up happening because Snyder’s movie was just too long. The Suicide Squad felt a little shallow and empty because it was a more comedy/violent centric film. I think both films have their strengths and weaknesses. Justice league has too much slo-mo and suicide squad has too much comedy.

suicide squad by a large margin, while justice league is very good it is also long and it leaves plot threads hanging,suicide squad can be watched in under three hours,is less drab, and doesn’t have a missing sequel. If the snyderverse was actually continued I might like justice league more.

also despite justice league being two times the length of suicide squad, the suicide squad managed to have more female characters to actively engage in the plot, waller, Harley, and ratcatcher. as opposed to just wonder woman(who is awesome but the movie has more focus on cyborg, flash, and bats)

Meaning you shouldn’t care so much about these criminals because they are all expendable and almost all of them were going to die.

Neither Suicide Squad film has really delivered on the premise in a fully satisfying way.

Yeah, I got desensitized from all the murder and mayhem because at the end of the day, it’s just an rated R comedy film. It wasn’t taking itself seriously and when it tried to pull at my heart strings, I was like meh

It didn’t feel like there were any real stakes even though people were getting killed left and right. I think the suicide squad was just meant to be a fun time at the movies. If you go into this movie expecting a serious compelling superhero film, you’re gonna be disappointed. Which is funny because that’s what they say about all marvel films. So I guess James Gunn made an rated R Disney film

The Suicide Squad reminded me of these two films. Basically an R rated guardians of the galaxy.