I’ve read assorted adventures of The Warlord, aka Travis Morgan, over the years but precious little from his original series that spanned 133 issues, 6 Annuals and ran for 12 years.

So, what’s a good batch of affordable issues to look for? Are there any multi-issue arcs worth a read or is this series primarily one and done stories?

I’m looking to pick up some issues of this series at a comic store in the next week or two, so any recommendations from it are most appreciated. 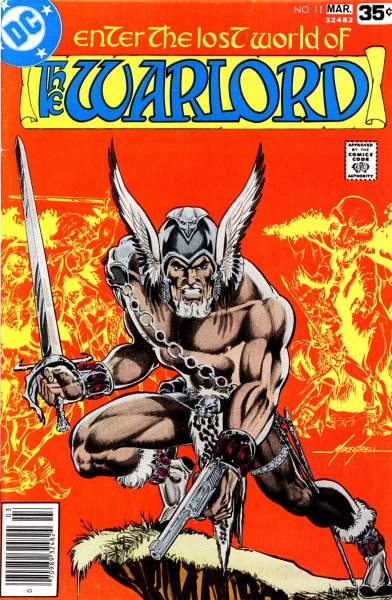 *Recommended. I blame Deimos for that typo.

Oh is that the guy from that eps of JLU S2 eps. 3 “Chaos at the Earth’s Core”

I only know Warlord from his appearances in Green Arrow, where the fact that he and Ollie look exactly the same (Mike Grell created Warlord and drew both titles) was a bit of a running joke.

Warlord is also a big player in Convergence.

@Vroom LOL I have that book gosh my memory sucks!

@mrmiracle Are those issues of GA available here?

@Vroom Unfortunately not. Grell’s GA run ends on here skips from issue #25 to issue #80, and the appearances are in #28 & #29. He also pops up during the Connor Hawke run (can’t remember which issue) but that’s not here either.

CORRECTION: Issues #27 & #28. But I remember them being a good little two parter, so probably worth adding to your list.

@mrmiracle They’re on my list, thanks for the info.