Your Complete Guide to DC's 2021 Round Robin Brackets

Also, voting on Twitter is hella hard. There’s already a flood of comments on the hashtag making it difficult to find the individual posts.

SO MANY amazing books here!

I love my speedsters, so I have to say Jesse Quick? YES PLEASE. I will take ANY speedster/FlashFam book. And it’s been so long since Jesse Quick’s gotten much attention.

BUT there’s also JLQ? Something I’ve been wanting to see forever? (Because that queer rep matters! A LOT!) And Ambush Bug sounds hilarious, and Jaime feeling directionless? Relatable.

I would be so, so happy to have all of these books.

Good note, @keath! I’ll grab the individual links and update the post above.

I swear… Robins is my vote, as an ensemble book, but on the other hand… Justice League Queer? That’s amazing. How about we pick three? Lobo’s sounds fun. On the upside, there’s no Tom Taylor Revolutionaries listed here, so hopefully that’s already in the works…

Oooh. A lot of these sound good. REALLY good. Some thoughts that come to mind.

Etta Candy having her own solo story sounds fun, though I don’t know if I really see Amanda Waller really joining the team. She doesn’t seem the kind of gal who would gel with a bunch of peppy soritiy girls.

Brave & The Bug could be fun, could have a lot of good meta gags about DC continuity.

Zatanna & The King of Nightmares sounds cool – she’s needed a new solo story for a while now. It DOES sound a little similar to what Paul Dini did in his run on her ongoing back in the day, so I’m curious as to how they would switch it up here.

Lobo and Animal Man is a combo I have never thought of before. Not a big fan of Lobo, but LOVE me some Animal Man. I’m not really sure if this properly explains what the story is, though, since the description mostly just sets up who Lobo is.

Son of the Creeper…eh. Could be cool, but nothing that really draws me.

Justice League Queer…LOVE the idea…not to sure about the title. I don’t know, I get that people in the community are reclaiming the word, but is it reclaimed enough to be the name of a book? Maybe something like Justice League Pride would work better. I’d also be curious about the characters involved and how they come together.

Robins…that is a book that I’ve been wanting for YEARS.

Paws Off the Justice League could be fun, but not one I would immediately go to.

Jesse Quick sounds interesting – that’s not a character that’s gotten a lot of focus before, so someone could really make a mark with her.

Blue Beetle, another character who’s long overdue for a new solo story. That sounds cool, I especially dig the idea of Starfire being there as a mentor.

Nightrunner? That’s a name I haven’t heard in a while. That could be cool.

I will NEVER say no to more Swamp Thing.

Suicide Squad Seven…I guess DC really feels they need to have Harley in a SS team in order for it to thrive, huh? Not that I’m complaining, I’d buy that in a heartbeat.

Asteria…that’s the name of Lynda Carter’s cameo character in WW84, right? That sounds interesting, could be an interesting foil to Diana.

Superman & Lois…intriguing idea, especially since it seems to have Lois more in the spotlight, but I don’t know if Lois blasting killer asteroids is a good use of the character. Lois is at her best when she’s a reporter.

these all sound extremely interesting and yall expect me to be able to choose???

Thanks. The “thread” from the main tweet helps capture most of them, but for some reason the final Asteria v Supe/Lois doesn’t show for me.

(And even after figuring out my Instagram password, I can’t find anywhere to vote there. I must be too old.)

Can we just bring back a Legends of Tomorrow type format to fit all of them?

I’m definitely for this idea – and DC is definitely playing around with anthologies and back-up stories lately, so if Robins doesn’t get voted in, say, why not have a Robins back-up in Nightwing?

If my choice was never known:) I’m up for Harlequin all year round. But some other choices I could follow as well. Let’s do them all… Fair to say everyone will be made happy

@Applejack are you voting for the ultra-awesome sounding Swamp Thing thing? Or are you ineligible?

Well, I’m absolved of the responsibility of choosing, at least! We’ll see who wins.

Could this be… Sweet Tooth?? 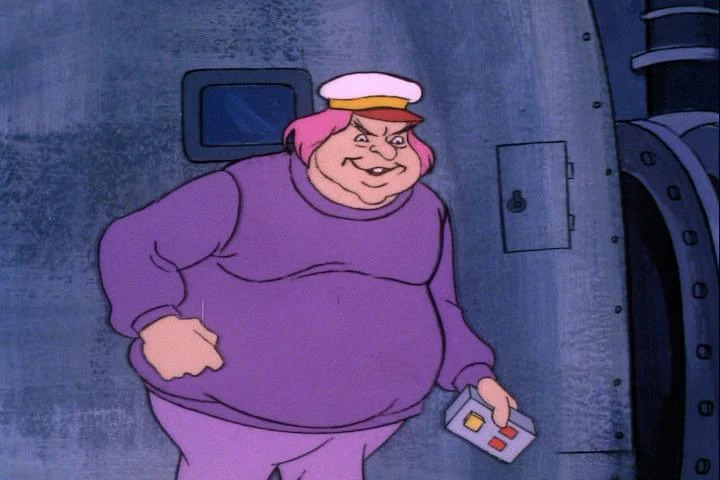 Eeeeeeeeeeeeeeeeeeee! So many options! I’m really intrigued by Suicide Squad Seven, not because of Harley but like the descriptions of the other characters is just so ridiculous and intriguing I gotta see it. I also love the Paws off and Jesse Quick books because 1. Super Pets and 2. Jesse needs more spotlight.

The fact that we have a chance to see fresh stories with characters that don’t get enough love, but the polls show everyone choosing the same tiredt ones over and over again. 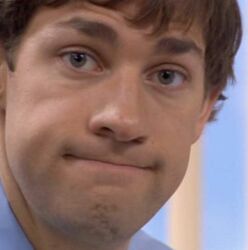 I don’t know how you all are going to be able to choose, but I’m excited to see where this goes! I love reading all of your opinions! 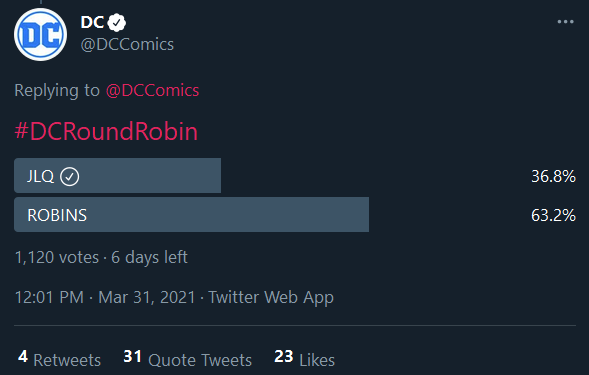 Zatanna & the King of Nightmares. Why? Favorite character. Also, the magical realm is where I make my bed in DC. Plus I have insane dreams in color & I Lucid dream. So this story is the most relatable to me & I’m always happy to root for Zee!!!

Honestly all these books sound great. There are no wrong answers here. Feels good to be taking part in an election where we’re choosing the greater of 16 Goods.

Could this be… Sweet Tooth??

I was hoping for the Tooth Fairy. 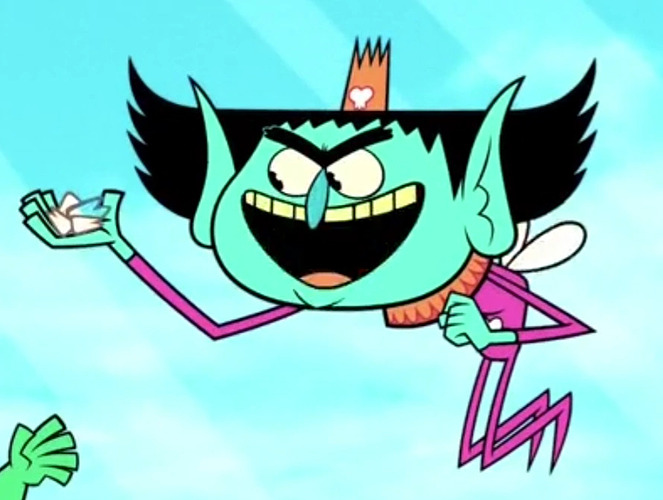