The Young Justice storyline jumps from the screen to the page with the upcoming Young Justice Targets! To celebrate issue #1 coming to DCUI next week, we’ll be welcoming two amazing guests for a DC Community Q&A. 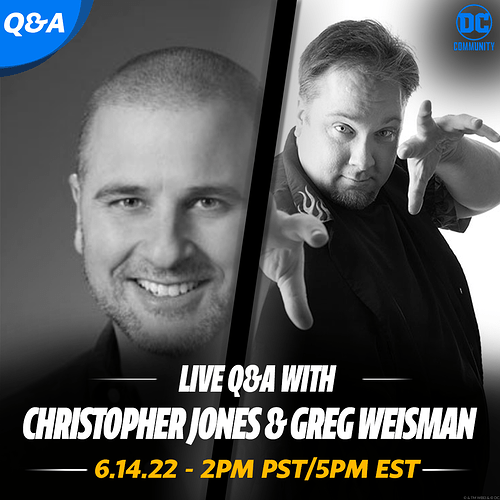 Join us on June 14 at 2pm PT/5pm ET for a Q&A with Chris Jones and Greg Weisman! Have questions about transitioning from TV to comics? Want to know what inspires the writers and artists behind the upcoming series? Drop all of your burning questions in the thread below, and come back next week for the live Q&A!

Please remember to submit only one question ! We have a limited time with Greg and Chris, so we’ll try to get through as many questions as possible.

Hello Greg & Chris,
Thankyou so much for time, my question is, will we see the Penguin on Young Justice? I’m a huge fan of the character and would love to see him on the show.

Who will be in the team? Will Greta Hayes be in it — asking for a friend

Thank you for taking our questions. I was curious if this was an idea that got left out of the current season or a new idea that came about after the season was written. I love this show and hope for another season or at least more comic series.

Why bring Damian into the show over Helena Wayne? Because this is one of the universes where she works.

Also, Damian Brat Wayne/Al Ghul/ Ibn al Xu’ffasch is literally the third worst thing done to Bruce and the worst thing in a long line of bad things Talia has done to Bruce. However, Helena Wayne is literally the best thing to happen to Bruce as he gets to raise her with Selina Kyle-Wayne the women he loves, and gets 20 years of happiness with her and her mother.
worst thing to happen to bruce: Parents murdered, Jason killed, Damian. Especially because Talia literally keeps him a secret from Bruce during his formative years and literally just dumps him on Bruce.

Damian seems to get special treatment from DC from having Bruce literally hunt to find a way to bring him back to life, something he does not do with Damian, to Damian literally surviving every apocalypse DC has had since his introduction. note: Damian’s middle name is actually unknown.

Damian Unknown Wayne! It has a ring to it, dontcha think?

yes, but I feel Damian Brat Wayne has a better ring to it.

I love that characters that first appeared in the original YJ tie-in comic series a decade ago like Wyynde, King Sha’ark, Blubber got to eventually show up in animation in YJ Seasons 3 and 4.

Is YJ: Targets introducing any new characters that Chris got to design/draw that we may see again down the line in the animated series?

Since there are so few questions, I risk a second but feel free to ignore if more show up.
Are there any plans for future Legion appearances assuming more shows or comics.

Hey Greg and Chris, thanks for coming back! That was a really phenomenal season finale we just watched. I’ve got one question though – how were Zod and the other Phantom Zoners instantly able to address Metropolis in English when they emerged from the Boom Tube? Thanks!

From what I’ve read online, it appears that each story will have a back up story as well. Will the backup be solo adventures of our heroes or villains from the past or team adventures filling in some gaps from the TV show, and was their a Young Justice character, you wanted to include more of but just didn’t have the space to do so.

I don’t see the point in putting a question when mine never get asked but whatever. In hopefully future seasons, will you be continuing to focus on the OG Team?

First this season is was great. Really enjoyed it. And exited for the comic. Hoping for season 5​

My question is I’m curious to why Vandal Savage was chosen as the big bad or an important one at least and will his plan continues to grow in these comics?

I’m a bit confused on the timeline, which might just be because I’m stupid, but is the child that Ursa is pregnant with in the season finale supposed to be, genetically at least, a version of Lor-Zod? Or did the present day Ursa already give birth to Lor?

When will you two work on the next Gargoyles?

Growing up that was one of my favorite shows!

Thank you for your time.

Hi Greg and Chris!! I absolutely loved the finale of S4 and all the episodes and how we got to see the original team again. Will the YJ Targets series introduce any new characters that we have not seen before and will some team members have new outfits and or designs?

This question is for Greg what made you decide to give Conner only some of his power from the comic in this series.

This season of young justice has been the best one so far. I hope it gets renewed you guys have been doing a an amazing jobs

Y’all are amazing and so was this latest season. I cried, screamed, and made many question my mental health, but I wouldn’t have had it any other way.

What was it like voicing Lucas Carr and being the one marrying Miss M and SB? After all this time, did you feel something special when you finished recording the dialogue that closed up what was opened back in pretty much episode 2?

My Question is for Greg. I know you said numerous times there will never be a definitive ending to Young Justice, that you only do open-ended closure.
But i have to know do you have a ending for the Darkseid Saga planned? Because i feel like it’s leading up to be essentially your Infinity Saga.

Thank you for your time #SaveEarth16

Hey there! I absolutely loved the season 4 finale. I have a nitpick-y question regarding the wedding scene. Conner mentioned that everyone there was “in the know,” so I’m curious about how Wendy Harris and Harper & Cullen Row found out (as in, who told them and when)? Thank you so much for your time and another wonderful season! Can’t wait to read Targets!