I heard a rumor that the next season of YJ is gonna be called, “Young Justice: Phantoms”

Assuming this is true, what do you suppose it means? The most obvious point would be that it has to do with the supernatural, but given that they’ve already covered magic at length in the show, perhaps it could have a deeper meaning?

Regardless, what are some of the things you would look forward to seeing? Last season had a lot of different teases and easter eggs, but there’s no way of knowing how much of that will become relevant, especially considering the possibility of another 2-4 year time jump.

Lot of connotations there. Perhaps metaphorical phantoms of the past. If so, the Jason Todd tease from the 3rd Season is sure to be paid off. And perhaps the return of Wally!

I definitely think it must refer to Wally. Like people keep seeing his “ghost” aka phantom because he’s trying to escape the speedforce. In Batman: the brave and the bold they did that with Barry Allen when he “died” so that’s my thought. (But I could just be looking for any connection to Wally coming back)

Given the Legion flight ring in the last episode. I’ll go with a group is sent forward in time. This would make them “ghosts” in a sense. Existing long after they are dead. Could we see the Legion and YJ team up to battle the black lantern corps? Or an incursion from the weaponers of Quard.

My personal favorite is a variation of the great darkness saga, where in the future, the pact between Darkseid and Vandel Savage is still in tact. YJ and LOSH must fight two formidable opponents at the same time.

Not sure what phantoms could mean. A lot of these theories sound great. But who knows. Maybe it’s a working title.

Even if it isn’t the title, Wally will probably have something to bring him back in some way. The legion has to be a big deal in it. I know we have Cyborg, Tim drake etc other Titans characters but I think it’d be fun to evolve Tim to his red Robin and bring in damien Wayne robin red hood just jump ahead and do full red hood and a more established secondary Titans team with Superboy mainly still with YJ squad ms. Martian, the outsiders and you know that crew. I think it’d be fun to see the natural development of each character as we already know they do.

Let me also say I love Artemis and I really want to see the green suit back and more of how she was originally… I don’t really see her as this newer version…I feel like the bow and arrows make the most sense for her, they distinguish her from her sister Cheshire and her new costume identity I mean I understand them progressing her as a character that way, but I’d like to see her essentially be a female green arrow, they’re essentially doing her with Mia on the CW now (kind of I guess?) But the YJ Artemis was what I liked alot. The early seasons when she was young and had the guys fighting over ms Martian then her lol Haha. I don’t think they will go backwards and do that with her but I think it serves her character better because she seems too much like Cheshire and while I guess arrows, archery is like her dad sportscaster but not really because she was modeling herself after Olliver and Olliver has less ties to the team now except for Speedy and the clone red arrow etc but Olliver seemed more involved when Artemis was legit his protegee

I do love the first season because we got to develop the characters with the smaller team, and I miss that. If they were at least doing the tie in comics we could get some insight into the characters background, home life, relationships, etc. In the fourth season I would like more time spent on character development like in the first season, where the action could be background and not the main focus of an episode.

Does anyone know when season 4 is supposed to come out? Season 3 premiered January 4th, 2019, but it doesn’t look like we’ll be getting season 4 January 2020. So when’s it coming?

no idea on a release date but i second the desire for more character building! less time jumping and more bringing back the season two characters they made me fall in love with, The teaser picture came out with Arrowette, Spoiler, Tim Robin, arsenal and Thirteen and they were BARELY FEATURED. I was EXCITED. i wanted, no, NEEDED to see this cast of characters back and i saw more WONDER WOMAN than Spoiler and Tim spoke OR moved in barely four episodes! I want everything season two promised me back.

This third season was impressive because it was ambitious and alluded not only to the League, the Team, the outsiders, batman inc., and the happenings of the galaxy as a whole, but it grabbed SO MUCH. the little tidbits and teases that were dangled in my face lead me nowhere and I would really like that payout. came for the dick grayson? stay for the tim drake! except forget Tim, here’s Dick again. No, i really adore Tim, i waited, i was almost gleeful, and now i feel like i’m still waiting. We could have focused on the second string of young heros, Bart, Jaime, Gar, Virgil and Eduardo, and we ALMOST DID THE THING and then the over ambitious plot came barreling through like the guitar intro to “Wipe Out.” I’d love to know that the wider world is still turning, but seasons one and two did it better with mission briefs telling us more definitively where people were. It was literally asked “Where the heck is Fate?” If there’s no accompanying comic series to back up the show to GIVE us either the character building we miss, or the World building they just can’t squeeze into each episode, i’m all for a much less ambitious storyline.

TL:DR please bring my small team in a big known world back.

Given the Legion flight ring in the last episode. I’ll go with a group is sent forward in time. This would make them “ghosts” in a sense. Existing long after they are dead. Could we see the Legion and YJ team up to battle the black lantern corps?

I did a vlog about my thoughts on Season 4 a few months back, and I leaned towards the Legion getting involved, too. I’m even guessing it’ll be called “Young Justice: Legion”.

Omg they can’t. We’ll have waited 8 years for Wally to come back which is simply rude.

I don’t think it will be that long because they had to wait for DCU to be released and start everything up again whereas now everything is in place and they could’ve recorded right after they finished season 3. Season 2 was released a couple weeks after season 1 ended so they’re capable of a quick turn around.

Phantoms as a way of saying “back from the dead”? Jason Todd (sense he had a tease in season 2 and 3) and also Wally because he was a GREAT character

Perhaps metaphorical phantoms of the past.

This is what I was thinking too. We had last season’s fever-dream-induced flashback to the original team and it was a really pivotal moment. They constantly revisited Wally and how the team felt about him all throughout the season. So I think this is going to be a central theme, as it’s been said season 4 will focus more on the original team.

With the outsiders group, they need to confront their “phantoms” as well. Violet’s past life, the one she took over as a mother box consciousness, has haunted her and she’s had to deal with the repercussions of that. Brion’s actions at the end of last season will need some kind of reckoning as well. 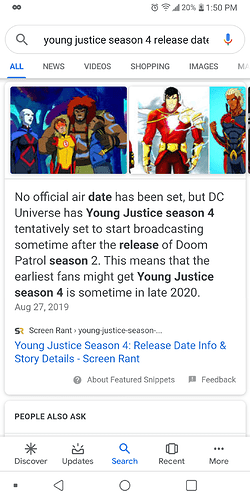 With the war between Darkseid and League starting to heat up maybe we could see Wally return sometime during the war like in the New 52 comics with Wally’s rebirth. Because that would be interesting since Young Justice came out around the time they started the New 52 comics. But who knows the speedforce is a very confusing thing, and it does make sense for Wally to be sent to the future or even the past because once a speedster runs fast enough they can time travel. What are your thoughts on my ideas?