"You Don't Know Squad": An Exclusive Sneak of James Gunn's The Suicide Squad 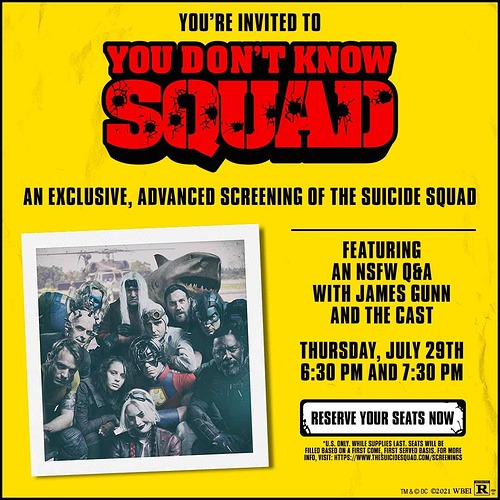 You are cordially invited to an early screening of THE SUICIDE SQUAD on Thursday, July 29th. Get the chance to watch the full movie ahead of its release as well as a 10-15 minute R-rated Q&A with James Gunn and the cast of The Suicide Squad.

Screenings are available in the following locations:

All locations have 2 screenings at 6:30PM and 7:30PM local time, so there’s plenty of opportunities to watch!

To snag tickets for the screening, head to Thesuicidesquad.com!

What are you waiting for? Get ready to be one of the first people to see THE SUICIDE SQUAD

Got my tickets. Surprised that it was actually free. Can’t wait.

Picked up my ticket for the DC screening last night! This is such a fantastic surprise!

Con: The theater with the showtime that would work for me (7:30) is very far away, and due to its distance and other reasons, I couldn’t make the show in time.

I know for certain that the theater I would have gone to does not have laser projection and Dolby Atmos audio like the theater I’ll go to on August 6th does. Being a big theater tech nerd, I’m happier waiting until August 6th for the superior presentation.

I’m gonna have to drive two hours just get to the theater it’ll be playing at, but y’know what? Worth it.

Got my pass. WOO.

Is Detroit sold out already? I see it as a city in the email but it doesn’t show up on the wesbite

Hey, looks like that’s the case, I also don’t see any passes for Detroit.

I actually realized on the website the theater for Detroit is in Sterling Heights and wasn’t sold out when I checked! But the theater looks like a less than average experience and it’s an hour away from me. I’ll just wait and go to a nicer theater near me or watch on HBO Max!

That was a funnnn movie. We need a spoilers thread because I have things to say! Kinda.