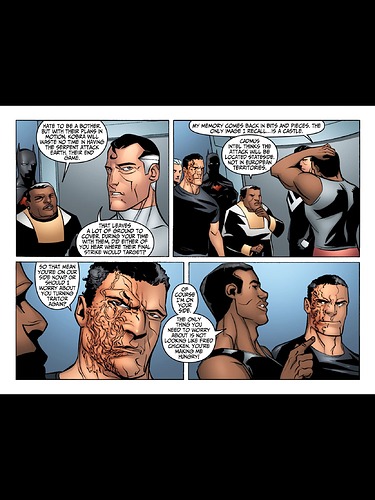 Source seems to be Justice League Beyond (2012), by Dustin Nguyen and Derek Fridolfs. They’re usually not this thoughtless, so I’m inclined to call this an unfortunate parallel to a stereotype rather than intentional overt racism. I mean, almost everybody likes fried chicken.

I am now hungry for fried chicken. It is cheap (by meat standards) and delicious.

I am now hungry for fried chicken. It is cheap (by meat standards) and delicious.

Speaking of fried chicken, KFC is cheap (by the standards of good chicken) and not delicious (unless you dig chicken-flavored bones).

pulls on his “Make mine Popeyes, true believer!” t-shirt

Noce to see praise for my state’s chicken.

I will praise Popeyes chicken all day.

This is more abuse of the disfigured.

I’ve read this a couple of time, I’ve find nothing racist about it.
All Superman did was asking a guy if he can trust him, and the guy say sure and try to light the mood.
It’s as harmless as the movies Uncle Buck and Liar Liar when both main characters make a joke on a person’s mole on their faces.
I don’t think DC comics would do anything bad to hurt the readers. There’s some comic that can have a real touchy topic like the famous Green Lantern/Green Arrow Team-up. Behind the famous storyline, the lessons are don’t do drugs and don’t judge people by their appearance which is true and a good advice.

Mha his face looks like a chicken fried steak to me. I agree with HubCityQuestion This was likely unintentional.

I will admit There is a long history of Racism in comics especially in the golden age of comics however some of this more due to the view of the time and the propaganda aspect of comics during war years and was truly whitewashed in a lot of ways. however, the more intentional aspects of racism in more modern comics Like in Darwin Cooks Justice Leauge: The New Frontier (graphic novel/limited series) is meant to reflect the times it takes place in.

Really the early era of comics right up till more recent times was also very sexist, especially when the comics code came around. However, the code did have some good points like “Females shall be drawn realistically without exaggeration of any physical qualities.” not showing all women as the busty goddesses some of the TnA eras of the 90 comics had. however unfortunately you also have them try to conform to societal norms of the time (and as the male writers understood it). Like Black Siren in the Justice League cartoon.

However, this was also somewhat subverted the idea that superhero comics were for boys at the time, thus we get a lot of fairly skimpy or form-fitting outfits (i am going to say this kevlar is not a hard material on its own, I own some welding sleeves made from it and its a spandex like material) on the heroines however on the other hand as I understand it this can be empowering to a woman, but my understanding is very limited as I am a man. The catsuit Michelli Phipher wore in batman returns and batman 89 is an example of this as I understand it, the same with Wonder woman’s outfit in Wonder Woman 77 tv show.

So let’s face it yes for a long time comics were both racist and sexist and are moving away from that., However, in this instant, I do not think it is.
(the history of comics is fascinating to me)

It’s as harmless as the movies Uncle Buck and Liar Liar when both main characters make a joke on a person’s mole on their faces.

“Go downtown, and have a rat gnaw that THING off your face!”

I do not believe the writer meant this to be racist. But I can see where some people would see it as racist. In my personal opinion it is just in poor taste.