John Byrne’s legendary work with Superman is well known and rightfully held in high regard.

However, Byrne has dipped his toes in a variety of other DC franchises. Titles such as:

That’s just a small smattering of Byrne’s DC work outside of Superman. What are your favorites?

If you’ve never read anything written or illustrated by John Byrne, where would you like to start?

It’s been 33 years and Byrne’s Man Of Steel is still the definitive origin of Superman. In striking contrast to previous continuity, gone was the bumbling, fraidy cat-nebbish and in his place stood a fully rounded Clark Kent who just happened to be Earth’s “greatest protector”. John Byrne laid the ground-work for Wolfman, Ordway, Simonson. Stern–and of course–Dan Jurgens’ spectacular ten year run on the Superman books that has yet to be equaled.

@baseballmaniac Agreed. Byrne and Jurgens are among the masters of Superman.

Have you read any of Byrne’s other DC work? Speaking of Superman, his work on The Tenth Circle arc of JLA (issues 94-99) showcases Big Blue quite admirably.

The Doom Patrol were also in The Tenth Circle, with that arc serving as the launching point for Byrne’s Doom Patrol series.

Wildcat used to call Queen Hippolyta Polly. I remember him using that in a JSA comic when the Queen had died whick she often does. He said something like “Polly was a tough one, wasnt she?” to Jay and Alan.

@Vroom, Yes I’ve read all his DC work and enjoyed them all immensely. John Byrne the writer belongs in the pantheon of this medium’s greats. He’s definitely on the Mount Rushmore of Marvel great scribes along with Lee, Thomas, and Englehart.

Agree with everything stated thus far. Was disappointed though with DC’s decision to leave the Golden Age Wonder Woman out of JSA history, in Legacies. Byrne worked to hard to put her back in. Love it or hate it, JB’s run on the character reestablished her GA roots and maintained JSA continuity!

I haven’t read all of Byrne’s Wonder Woman, but what I have was enjoyable and quite fun. Definitely one of her 90’s highlights.

For anyone curious, Byrne’s Wonder Woman constitutes the following:

I know you’re looking for non-Superman-related books, but when I think of John Byrne, I immediately think of his Elseworlds opus - Superman/Batman: Generations. Probably my favorite DC work of his.

Ah yes, Legends. I need to re-read that. Thanks @Super-Squirrel.

I’ve kind of found most of Byrne’s work overall to be… not bad, just not my favorite. I really like Man of Steel, but that’s pretty much it. There are some good Claremont/Byrne X-Men stories, but for the most part that run is just boring to me. Sacrilege, I know. It’s just my opinion.

He’s an insufferable, arrogant SOB from what I understand. But good lord can he create!!! 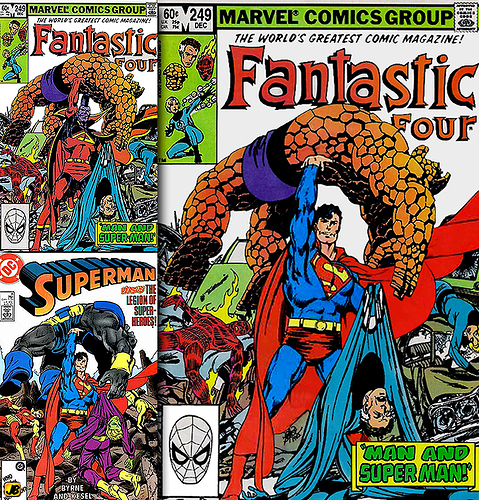 @DCCC Gail Simone sure didn’t seem to find him to be too pleasant during their limited run on All-New Atom.

But yes, the man can cook.

His first work for DC Comics? Untold Legends of the Batman 1.

Back in the 80s, maybe 90s he would make a rare con appearances up in Mansfield ohio, and his ego back then was HUGE. But the guy was THE GUY back in those days. Most of his after superman dc stuff never did it for me, but his Next Men series was ahead of its time…according to my memories.

@Misfit That is indeed an early DC credit of his (Aparo shared some of the art duties on that series too).

Given TULOTB was my first exposure to DC in comic form, that book probably subconsciously implanted my love for Byrne long before I would put his art and name together.

Aparo was a storytelling master.

Some sequential artists are cartoonists… Some are more illustrators. John Byrne is a mix of the two like almost no one else.

Byrne wrote and drew a three-issue arc of Batman (I believe the title was “The Many Deaths of Batman”) in between A Death in the Family and Batman: Year Three. The plot is a reasonably well-executed murder mystery, but what’s really cool is how he wrote the first issue, or rather how he didn’t write it. It goes a full twenty-two pages with only two words of dialogue. That kind of strictly visual storytelling is hard to do, but in this issue it took me a while to even notice that there wasn’t any dialogue.