Wow, Mike Baron really made Wally a DICK after Crisis...

He was so selfish! And he kept cheating on his ladies!

I’m so glad Messner-Loebs took over. It gives me a new appreciation for his writing. He changed Wally for the better in a very subtle way.

I also really like Greg LaRocque’s art more this time around. Not sure why. I thought it was ugly when I read his Flash stuff years ago.

Also, I remember an old ad for that series when it was first starting. The tag line was “What else would you expect from Baron and Guice?” Guice is the artist. Were they a hot creative team back then?

I found the actual ad. 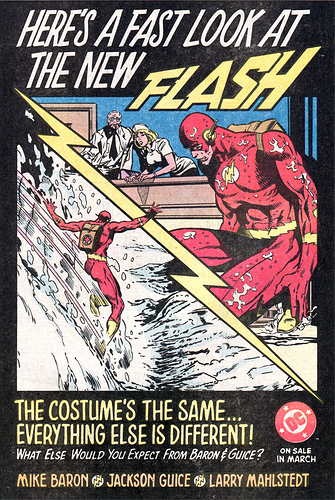 Yup, Messner-Loebs got that book on track, his stuff is underrated and overshadowed by the Waid & Johns runs. But it was he who truly established the Wally West we all came to know and love… … … … Before Tom King recently destroyed all that.

Eh, Messner-Loebs’ run fell kind of flat for me. Definitely agree about Baron, though.

I found a really interesting article about Baron and Messner-Loeb’s runs. Looks like editorial WANTED Wally to be radically different from Barry.

Does anyone know if Messner-Loeb’s is still homeless? He seems like such a good guy, I really hope he found some work and stability.

“As of early 2018, William Messner-Loebs and his wife have continued to struggle financially, with Messner-Loebs working two part-time positions in Michigan.”

Wow. Sorry to hear he’s struggling, but at least he has work.

That’s why they had to change Nightwing’s name. Now anytime someone says Dick, everybody thinks of Wally.

I mean, he was pretty much a dick in New Teen Titans too.

@Jay_Kay I never knew that. I should really read Titans. Should I start with the Wolfman run?

Personal opinion: The Wolfman run is really slow until around the Judas Contract. Then it’s solid for a year or two, but then drops off again when George Perez leaves and never quite recovers.

Wally was kind of whiny and combative at times, but never as selfish or petty as he was early in his solo series. And not entirely without reason in a lot of cases. I didn’t mind him quite as much, but I think it’s sort of a YMMV point.

@BatJamags
I’m kind of conflicted on New Teen Titans honestly. I don’t think there was ever a really great long stretch, but some issues I loved and then others I really really didn’t. I don’t think it was ever aggressively bad, though.

That’s about how I felt. I think I found some of the characters more compelling than others, so their stories got me more invested.